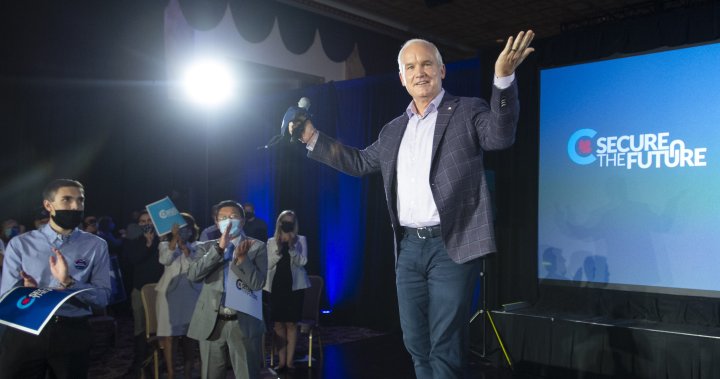 Canada had its first peek at the electoral pulse since Sunday’s federal election call as Nova Scotia elected its new premier — a progressive conservative.

The Nova Scotia election was originally called in the hopes of snagging a majority government for Iain Rankin’s Liberals. But the voters handed him a very different result — one that had federal Conservative Leader Erin O’Toole cheering on Tuesday night.

“A great night in NS!” he tweeted as the progressive conservative victory became apparent.

“Congratulations to (Nova Scotia Progressive Conservatives) and the next Premier of Nova Scotia, (Tim Houston), on an exciting election win!”


Good news for the Conservatives?

While Conservatives were cheering the PC win, there’s one important factor that pours some water in their wine: Premier-elect Tim Houston has publicly distanced himself from O’Toole’s party.

When a federal Conservative convention rejected a resolution calling on the Tories to recognize that “climate change is real,” Houston said that the position was “not helpful” to his own party.

“That’s a separate party,” Houston reportedly said at the time.

Still, one Conservative strategist maintains that the Nova Scotia win is good news for the Tories — Houston’s distancing from the federal Conservatives notwithstanding.

“It’s still definitely a good thing, because I think overall we now have the most clear present example of what happens when you call a snap election really over nothing,” said Kate Harrison, vice chair at Summa Strategies, in an interview with Global News.

“Ian Rankin was punished for it, and that may well end up being the case federally, as well, with Justin Trudeau.”

Rankin was reduced to a minority government heading into the election. For the federal Conservatives, they say this election result could point to an appetite for change in the Canadian public.

“Tonight, we saw how important campaigns truly are,” said Mathew Clancy, a spokesperson for O’Toole, in an emailed statement.

As they celebrate the outcome in Nova Scotia, Harrison added that the federal Conservatives can also learn some lessons from the successful PC campaign.

One of those lessons is to clearly read the country’s fiscal mood, she said.

“You need to be willing to talk about big spending in order to course correct some things that aren’t going right. Health care was one of those for the PCs,” Harrison explained.

“They talked about the fact that there would be big spending required to make things better. And people now are kind of conditioned for that. So the typical conservative refrain that we need to balance the books A.S.A.P., we just have to understand that there (are) other priorities right now.”

Still, one Liberal strategist warned the Conservatives not to read too much into this victory, given the Nova Scotia PCs’ previous comments about the federal party.

“It is going to be very tough for the federal Tories to make hay with this, since their provincial cousins in Nova Scotia made it pretty clear they didn’t want them around,” said Greg MacEachern, senior vice president at Proof Strategies.

Even if the PC victory doesn’t pave a clear pathway for a federal Conservative sweep of the province come election day, MacEachern acknowledged that Liberals should be taking note of the result.

“Are there signs and messages here for the federal Liberals? Of course there are. And they’d be foolish not to take a look at them,” MacEachern said.

The Liberal campaign in Nova Scotia had some early stumbles. The man at the helm of their party, Rankin, confirmed he had twice faced drunk driving charges in his youth. He was convicted in 2003, and then cleared in 2005. News of the charges broke in July, just before the election campaign began.

The party also came under fire when its Dartmouth South candidate, Robyn Ingraham, revealed she had been ousted from the campaign due to “boudoir photos.” She initially said in a statement she would no longer be vying for the seat due to mental health reasons, but three days later revealed she had been told by the party to lie about her reasons for leaving.

“Issues are going to come up. It’s how you handle them,” MacEachern explained.

The provincial Liberals struggled to navigate some of bumps in the road for their campaign, MacEachern said, adding that the federal Liberals will want to make sure they grapple with any of their own hurdles head on.

“There are other issues that the federal government is going to have to deal with while the election is on. We’re seeing that already with Afghanistan,” he said.

Trudeau has come under fire for calling an election on the day the Taliban took Afghanistan’s capital city. But MacEachern argued the Liberal leader has done the right thing by addressing the events at the start of all his press conferences.

The Liberals will need to stay on their toes to make sure they navigate any future hurdles in the campaign, he added.

“It’s the old Mike Tyson line: ‘Everyone has a plan until you get punched in the face.’”

But the Conservatives will also be fighting to win votes every step of the way — and the upset in Nova Scotia hints that a federal upset might be possible too, according to Harrison.

“It just goes to show how much campaigns really matter,” she said.

Incumbent provincial governments have handily won every pandemic-era election to date. That is, until Nova Scotia broke that track record. Harrison said that’s a fact worth watching.

“We just saw a province willing to kind of upend the government that they’ve had in place for 11 plus years in a time of uncertainty and be willing to embrace that change,” she said.

“That would be concerning for an incumbent government right now.”

While the Nova Scotia NDP came in third in the provincial election, they aren’t viewing it as a loss. The party held just five seats when the legislature was dissolved — but they made gains in Halifax ridings that beefed up their share of seats on Tuesday.

“When this election started, the pundits said the Liberals were on an easy road to a majority government,” said NDP Leader Jagmeet Singh in a statement emailed to Global News.

“This election shows just how much campaigns and every vote matters.”

The NDP carefully targeted specific seats in the province, according to one strategist. And he said it paid off when their share of the vote reflected the seats they actually won.

“The one thing that is important is to realize where your strength is and to focus your resources that are available,” explained Karl Bélanger, who is president of the Douglas-Coldwell Foundation.

“Clearly the Nova Scotia NDP was able to target ridings that they could win and they did not waste resources elsewhere.”