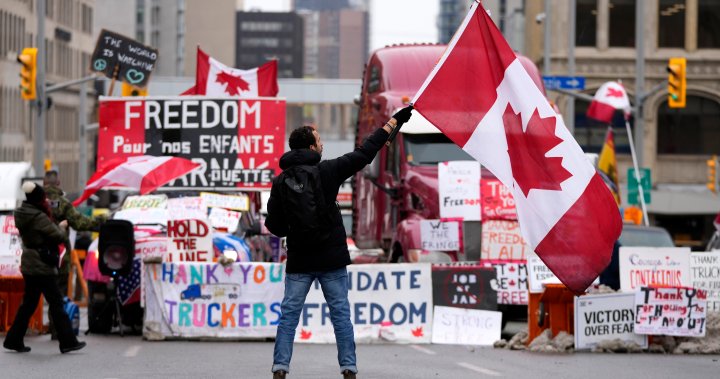 But Ottawa police’s plans to bring an ultimate end to the demonstrations – which showed few signs of slowing Sunday – have once again been called into question, after reports they’ve provided no detailed plan to federal law enforcement partners.

In a stunning Sunday statement, Mayor Jim Watson’s office says he successfully negotiated with convoy organizers to leave all “residential” areas in the city by Monday.

The deal between Watson and the convoy means the city will allow more trucks to position themselves in what police have referred to as an “occupation” and “siege” outside Canada’s parliament buildings.

“Our residents are exhausted and on edge, and our small businesses impacted by your blockades are teetering on the brink of permanent closure. I don’t believe these harmful effects on our community and its residents were the intended consequences of your protest,” the letter, sent to members of the media Sunday, read.

Watson asked Tamara Lich, one of the convoy protest’s main organizers, to remove “your convoy and its trucks” from several satellite camps around the city and limit their demonstration to the immediate vicinity of Parliament Hill.

The Ottawa mayor – who is not seeking re-election after more than a decade of municipal power – has pledged to meet with the organizers should his conditions be agreed to.

In a letter from Lich – also provided by the mayor’s office – the convoy organizer said they have made plans to “consolidate our protest efforts around Parliament Hill.”

“We look forward to working with authorities to ensure the safe movement of our trucks to their new locations,” Lich wrote to Watson.

2:03
Trucker protests: Demonstrators gather in Ottawa for 3rd weekend in a row

Trucker protests: Demonstrators gather in Ottawa for 3rd weekend in a row

It’s unclear how effective the deal will be at limiting the protest’s footprint across the city, or how it will be received by Watson’s council colleagues – including those who have been increasingly vocal about Ottawa police’s failure to bring the occupation to an end.

Police Chief Peter Sloly has requested hundreds of reinforcements he suggested were required to bring the protests under control. On Saturday, the Ottawa Police Service said in a statement that they had “a plan to end this unlawful occupation and await the necessary reinforcements to do so.”

But the Toronto Star reported Sunday afternoon that Sloly and the OPS have provided no “detailed” plans about how they would use the reinforcements. The report cited multiple confidential security sources, and a federal source confirmed the Star’s report to Global News.

The Ottawa Police Service did not respond to multiple requests for comment Sunday morning and afternoon.

When asked if OPS had shared plans to end the occupation with provincial authorities, a spokesperson for Ontario Premier Doug Ford said the Ontario Provincial Police “are working with the OPS to ensure the policing resources being made available to Ottawa are being used effectively in order to bring the occupation to an end.”

The OPS has been facing increasingly vocal criticism from Ottawa residents and some city councillors over a perceived lack of enforcement, as the convoy’s occupation stretches into its third week.