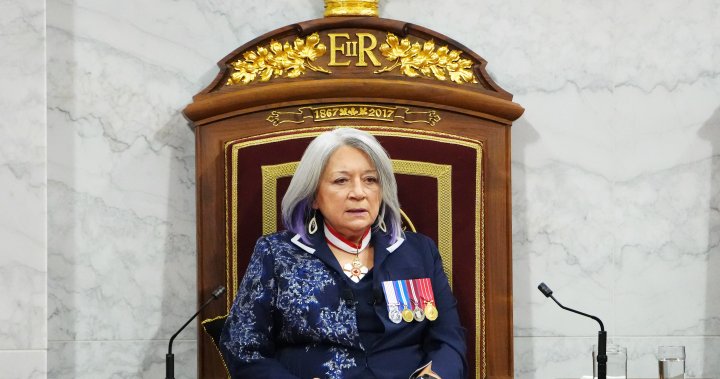 Prime Minister Justin Trudeau‘s throne speech offered a vision heavily centred on the continued fight against COVID-19, reconciliation and the cost of living — but also left out mention of a number of promises on high-profile issues.

Delivered by Gov. Gen Mary Simon on Tuesday, the 2021 throne speech laid out in broad strokes the prime minister’s vision for a country rebuilding from the chaos and uncertainty of the COVID-19 pandemic, with a focus on the cost of living, the importance of reconciliation and a cleaner economy.

At the same time, issues such as plans for national pharmacare, boosts to health-care spending and the military sexual misconduct crisis did not get a mention in the 32-page document.

For the NDP, frequently the Liberals’ closest dancing partner in the last Parliament, some of those absences raise crucial questions, Leader Jagmeet Singh told journalists.

“There’s no talk about increasing investments in our health care to keep it publicly funded and well funded,” said Singh. “And there’s no talk about pharmacare — something that was in the throne speech in the past and they’ve completely abandoned now — or dental care.”

Pharmacare has long been a point of contention between the Liberals and the NDP, with the latter arguing more can and should be done to speed up the process of reaching a national agreement and the government insisting it is working on it, but needs more time.

But it remains to be seen why the promise was left out this year after being specifically included in the previous two throne speeches.


Read more:
Trudeau throne speech lays out vision for COVID-19 rebuild with ‘economy of the future’

Health-care spending was also a concern for the Bloc Quebecois, with Leader Yves-Francois Blanchet telling journalists the party had suggested the government hold a summit on financing health care into the future.

“It seems not to have been accepted as an idea,” he said, adding the party plans to present specific questions to the government within a matter of hours about the wording of the speech, which he said “could have been written by a college student.”

Among the issues that got no mention were the challenges of dealing with continued protectionist policies in the U.S., Trudeau’s vision of Canada as a key producer of critical minerals for allies seeking more secure supply chains, or the disproportionate economic impact of the pandemic on women.

There was also no mention in the speech of the ongoing crisis of military sexual misconduct, which newly appointed Defence Minister Anita Anand has said is her “top priority.”

The government has faced significant criticism over its handling of the matter to date, and all eyes are now on Anand to assess what measures she plans to take to fix the longstanding problem.

Trudeau promised in the 2021 platform that the government will create an independent reporting system for military sexual misconduct, removing the process from the chain of command amid rampant reports of interference and conflict of interest in cases.

The government also promised in 2019 to apologize to survivors and victims of military sexual misconduct during the settlement of a $900-million class action lawsuit.

So far, survivors and victims are still waiting for that apology.