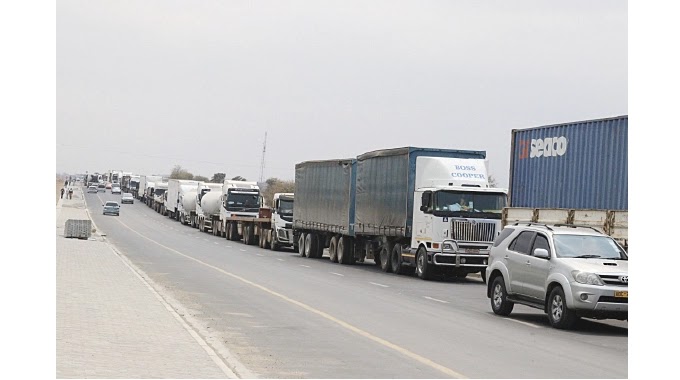 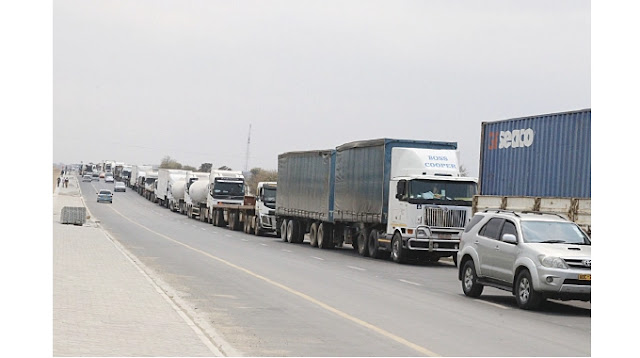 THE continued power supply crisis in South Africa has
triggered chaos at the Beitbridge Border Post where commercial cargo has
started to pile up.

The neighbouring country’s power utility company, Eskom,
has been effecting stages 4 and 6 of electricity load shedding.

Stage 6 blackouts equate to at least six hours without
power per day, possibly in two-hour cycles.

Things came to a head on Monday when load shedding affected
both the immigration and customs online system used to process commercial cargo
in the neighbouring country.

The immigration system was urgently resolved, but South
African Revenue Services (SARS) officials were by yesterday failing to process
bills of entry for commercial cargo leaving or entering that country.

Starting from Monday afternoon, south-bound trucks had
filled most major roads in Beitbridge town, with queues stretching for over 8km
into Zimbabwe.

An average of 900 commercial trucks are cleared for passage
between South Africa and Zimbabwe daily via the Beitbridge Border Post.

In separate interviews, commercial truck drivers said they
had become anxious and that most of them had been in the stationery queue for
more than eight hours.

“We have heard from our freight forwarders that load
shedding has affected the online customs clearance system on the South African
border and hence we are having delays crossing into that country,” said Mr
Peter Manyaira.

He said they were worried that some perishable goods will
be wasted if the long delays continue.

Another driver, Mr Lloyd Musemwa, said under normal
circumstances they spend less than three hours on the Zimbabweans border to
complete the customs clearance processes.

He said they were also concerned that some transporters
were being fined R5 000 by South African authorities for spending longer than
necessary in their border.

“Ideally, we should spend less than two hours at the South
African border and when you exceed these hours you are fined R5 000. This is
sad considering that the delays are not of our own making,” said Mr Musemwa.

Mr Danmore Makope said the drivers were worried about the
state of affairs at the border.

He said most of them were paid depending on the loads they
transport and hence a delay in the movement of cargo will eat into their
salaries.

Most of the goods, he said, were in transit via South
Africa to overseas markets.

The acting head of Immigration at Beitbridge, Mr
Trustworthy Manatsire said: “The delays are largely linked to electricity
supply challenges which has affected operations on the other side of the
border.”

Under the current set up, Zimbabwe and South Africa use the
preclearance system to process cargo imports and exports.

This is a facility where goods are cleared and duties are
paid before they reach a specific port of entry, where customs officials will
only check for compliance issues.

In Zimbabwe the clearance is done at the Document
Processing Centre (DPC) in Masvingo, Harare and Bulawayo before the trucks may
travel to the various ports of entry and exit.

Zimborders Consortium general manager, Mr Nqobile Ncube
said: “We are actively engaging with all relevant agencies to mitigate and
manage the situation. Unfortunately, extra territorial factors outside our
ambit are at play, but we are engaging and keeping tabs through relevant
liaisons.”

The consortium is transforming the Beitbridge Border Post
in a private public partnership (PPP) with Government at a cost of US$300
million. Chronicle