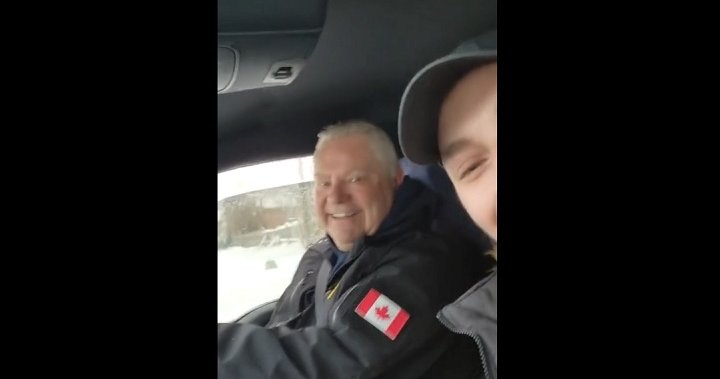 Premier Doug Ford was driving around Etobicoke Monday helping drivers who got stuck and giving people rides after a massive snowstorm hit much of southern Ontario.

The premier’s office provided photos of Ford, showing him helping to free a stuck vehicle at Kipling and Eglinton avenues.

Ivana Yelich, a spokesperson for Ford, said the premier was out all morning “helping people, either giving them a lift or helping them get their car out of the side of the road.”

A video posted on TikTok by user @eddykandic95 showed the premier giving a person a lift.

“This is Doug Ford!” the person recording said from inside Ford’s vehicle.

“I’m a taxi driver today, a snow plow, everything else,” Ford said in response.

Some social media users were quick to point out that the two were not wearing masks in the car.

Earlier Monday, Ford urged caution for those who were heading out on the roads.

2:29
Significant snowstorm impacts first day back to school across Ontario

“Today’s winter storm in parts of Ontario is creating treacherous driving conditions in many areas,” he said on Twitter.

“Stay safe and God bless each and every one of you.”

The Toronto area was among the hardest-hit regions in the province from Monday’s storm. Blizzard warnings were issued for much of the Greater Toronto Area.

The storm caused plenty of disruptions on roadways and prompted many school closures on what was supposed to be the first day of a return to in-person learning for all Ontario students.

Today’s winter storm in parts of Ontario is creating treacherous driving conditions in many areas. Please use extreme caution if you are heading out on the roads today. Stay safe and God bless each and every one of you.