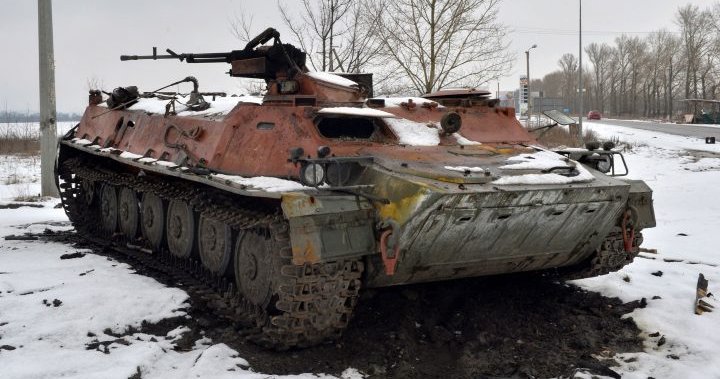 After weeks of tensions, officials from Ukraine and Russia will hold talks, Ukrainian president’s office has confirmed, as Moscow’s invasion that has rocked several parts of the country and killed hundreds of civilians entered a fourth day.

The talks, the first since Russia launched a full-scale invasion of Ukraine on Thursday, would be held without preconditions at an unspecified location on the Belarusian border, Ukrainian President Volodymyr Zelenskyy’s office said in a statement on Sunday.

The announcement came as Russian forces rolled into Ukraine’s second-largest city of Kharkiv.

A fierce battle was underway Sunday in Kharkiv, where Russian troops blew up a natural gas pipeline before daybreak, according to the Ukrainian state agency.

“The Russian enemy’s light vehicles have broken into Kharkiv, including the city centre,” regional Governor Oleh Sinegubov said, urging civillians to remain inside.

Until Sunday, Russian troops had remained on the outskirts of Kharkiv, a city of 1.4 million about 20 km (12.4 miles) south of the border with Russia, while other forces moved their offensive deeper into Ukraine.

Meanwhile, in the capital Kyiv, where a curfew has been extended until Monday, clashes have subsided and Ukrainian forces were resisting the Russian offence.

As of Sunday, both Kyiv and Kharkiv remained in Ukrainian hands. The Kremlin said its troops were advancing “in all directions”.

After weeks of warnings from Western leaders, Russian President Vladimir Putin launched the invasion of Ukraine on Thursday from the north, east and south.

On Sunday, Putin ordered his military command to put nuclear-armed forces on high alert, asserting at a meeting with his top officials that leading NATO powers had made “aggressive statements”.

Putin, in giving the nuclear alert directive, cited not only statements by NATO members but the hard-hitting financial sanctions imposed by the West against Russia, including the Russian leader himself.

As Europe’s largest ground war since the Second World War rages on, a Russian delegation of military officials and diplomats arrived in neighbouring Belarus offering talks with Ukraine.

Zelenskyy said his country was open to peace talks but had earlier rejected Russia’s offer, saying Belarus had been complicit in the invasion and instead suggested alternative locations.

Putin hasn’t disclosed his ultimate plans, but Western officials believe he is determined to overthrow Ukraine’s government and replace it with a regime of his own, redrawing the map of Europe and reviving Moscow’s Cold War-era influence.

In response to the Russian aggression, the United States, Canada and other NATO allies have sent weapons and other aid to Ukraine, which is not a NATO member. They have also slapped Russia with a string of economic sanctions, freezing the assets of Russian businesses and individuals including Putin and his foreign minister.

On Sunday, Canada, Germany, France, Spain and Italy joined the U.K., the Nordics and Baltic states in shutting their airspace to Russian planes.

“We will hold Russia accountable for its unprovoked attacks against Ukraine.”

Effective immediately, Canada’s airspace is closed to all Russian aircraft operators. We will hold Russia accountable for its unprovoked attacks against Ukraine.

— with files from Reuters and the Associated Press