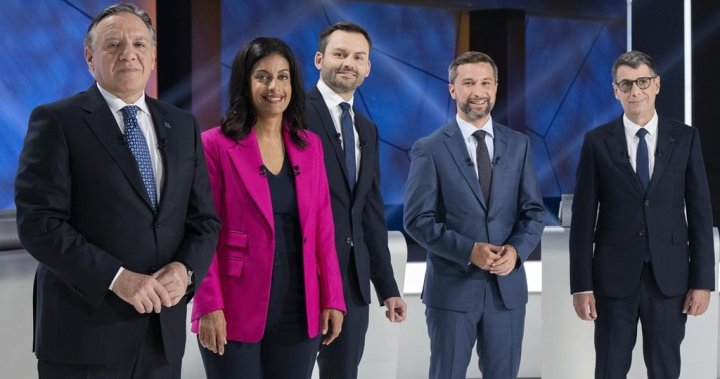 Quebec’s major party leaders made one final appeal to voters on the eve of Monday’s provincial election as polls continued to show Francois Legault’s party with a more than 20-point lead over his adversaries.

A poll on Sunday presented a picture that was relatively unchanged since the beginning of the election: the Coalition Avenir Quebec far in the lead, with four other parties in a pack battling for a distant second.

The web survey results released Sunday for Quebecor media properties Journal/TVA/QUB has the CAQ at 38 per cent support, followed by Quebec solidaire, the Liberals, the Conservatives and the Parti Quebecois, each with 14 to 17 per cent. The poll cannot be assigned a margin of error because respondents were selected from an online panel and not at random.

Legault, who was campaigning in Montreal and the Eastern Townships on Sunday, suggested his party was hoping to flip some traditional Liberal ridings to CAQ blue in his quest for a second majority government.

As he toured a market in Magog, 120 km east of Montreal, Legault was approached by a citizen who suggested the party could win a tight three-way race in the Liberal stronghold of Verdun, in Montreal’s southwest. Legault’s party won only two ridings on the island of Montreal in 2018.

He began in day in the Maurice-Richard riding in Montreal, which was held by the Liberals until the sitting legislature member was ejected from caucus over a formal complaint of workplace harassment.

Parti Quebecois Leader Paul St-Pierre Plamondon, on the other hand, conceded that a CAQ majority victory was appearing more and more likely. In a seeming admission that he’s unlikely to become premier, he pitched his party as the best choice to present a “strong opposition” to Legault on issues such as French-language protection.

St-Pierre Plamondon, whose strong campaign is credited with helping his party rise in the polls, urged would-be Legault voters to consider switching their vote.

Quebec election: What are the five main parties promising ahead of Oct. 3 vote?

“To sum it up, I’d say the CAQ doesn’t need your vote, but independence, the defence of French, the defence of our regions, yes,” he said at a campaign stop in the Gaspe region.

Liberal Leader Dominique Anglade began her day defending the decision to spend her final weekend campaigning in remote regions of the province where her party is polling in third.

After spending time in Gaspe and Iles-de-la-Madeleine on Saturday, Anglade headed to the northern Quebec village of Kuujjuaq on Sunday to campaign alongside her candidate in the Ungava riding.

She told reporters that she wants to show her party is a presence all across Quebec.

Quebec solidaire’s Gabriel Nadeau-Dubois was spending his day shoring up support in the Montreal area, while Conservative Leader Eric Duhaime began in Laval before heading to the Quebec City-area riding where he’s hoping to win a seat.

Duhaime told reporters Sunday morning that he believes the biggest accomplishment of his campaign will be in encouraging people who don’t normally vote to cast a ballot.

“I think the real victory of the PCQ is that we’ll have greatly contributed to raising the turnout,” he said, noting advance voting numbers were high in ridings where his party is competitive.

Under Duhaime, the Conservative Party of Quebec has grown from winning less than two per cent of the popular vote in 2018 to polling in the mid-teens. It’s unclear, however, whether that support will be enough for his party to win any seats in the 125-seat legislature.