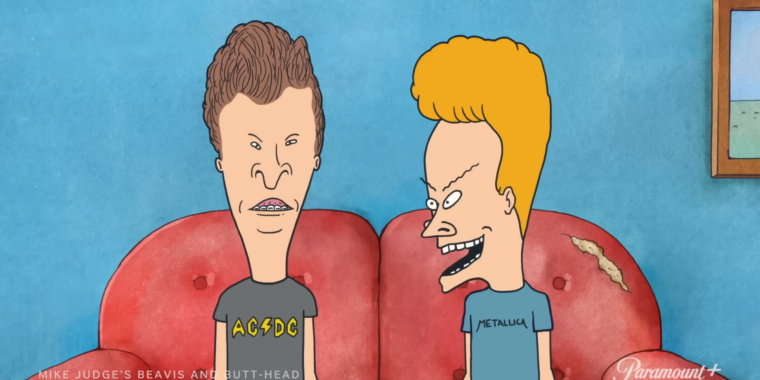 The easiest review of this week’s new Beavis & Butt-Head TV series revival could probably be written as:

If you still fondly recall the ’90s pastiche of the world’s two stupidest teens’ giggling, moronic hijinks, with “TV” interruptions between scenes, Beavis & Butt-Head‘s newest episodes, debuting Thursday, August 4, exclusively on Paramount+, will do it for you. Yet crucially, the series has been taken over by a new generation of writers and directors who grew up on creator Mike Judge’s original version.

This means a few things for the series, and some of those aren’t relevant to Ars Technica (though I’ll summarize my general thumbs-up opinion later). But one thing stands out as an interesting generational marker: a change to the series’ old TV-watching scenes and how their execution reflects a new era of app-fueled media consumption.

A primer: The original series, the 2011 reboot

For anyone who missed Beavis & Butt-Head in the ’90s, the MTV series wasn’t just a massive pop-culture sensation but also a cleverly low-cost operation. Crude animation kept costs down while also pairing well with the series’ grungy ’90s tone. Plus, instead of animating full 22-minute episodes, each episode only had roughly 10-12 minutes of traditional animation.

The rest was filled up by the titular characters (heh, heh, heh) watching music videos while Judge rattled off jokes in their voices. MTV had the rights to rebroadcast those videos at the time, and in a way, Beavis & Butt-Head became another MTV broadcasting block of videos when it ruled the pop-culture world. (In the years since, those licensing rights are far messier. Last month, Paramount+ brought back a tiny percentage of original Beavis & Butt-Head video-watching sequences, with most edited out and trapped on fans’ classic VHS tapes.)

You may have missed the first Beavis & Butt-Head revival, which lasted only one season in 2011 and updated the series’ TV sequences to include snippets of original MTV programming, particularly Jersey Shore. This was when MTV essentially acknowledged that the “M” in its name had been all but wiped out by reality shows, dating contests, and blacklight nightmares. While this revival briefly referenced a then-burgeoning YouTube, the 2011 version wasn’t ready to imagine a universe in which either Beavis or Butt-Head knew how to work a desktop computer or a TiVo.

This week, the animated series’ second revival emerges two months after a feature-length Paramount+ film, Beavis & Butt-Head Do The Universe (itself an “Ars” film thanks to its send-ups of American space travel and multiverse sci-fi concepts). Once again, we’re back to the old TV series shtick of fully animated episodes interrupted by video-watching joke fests.

These scenes are clearly curated by and for people who watch videos on the Internet. Ahead of this week’s premiere, Paramount made the revival’s first two episodes available to members of the press (heh, heh, heh, “members”), and for the TV-watching bits, it sure seems like someone connected an Internet video-streaming box to the duo’s ancient rabbit-ear television. (Their Winger-loving neighbor Nelson, maybe?)

One highlight sees the duo watch a minutes-long ASMR demonstration, one of the YouTube era’s biggest genres, and it plays out in an unsurprisingly amusing fashion. Butt-Head lowers his voice to match the YouTube video’s volume, and Beavis is cowed into whispering in kind. Jokes about the host’s noise-making arsenal emerge. Then Beavis begins to lose his cool: The combination of a cute woman as host and unusual whispering get him riled up. Butt-Head offers a familiar-sounding, “Shut up or I’ll kick your ass” in response. It concludes with Beavis’s aroused persistence making Butt-Head mad enough to slap Beavis, but even his slap is ASMR-appropriate: a soft glance of his hand on Beavis’s face.

The boys also watch some TikTok videos, which include a high school student opening up a college acceptance letter and an ex-con teaching viewers how to make prison tattoos. All three Internet reaction videos are far more scripted than the stream-of-unconsciousness stupidity that the duo typically applied to older music videos (heh-heh-heh, “stream”), and that’s almost certainly by design. In the nearly 30 years since the animated series’ debut, the reaction-video genre they invented has become its own industry, so its progenitors have chosen to adapt with a more polished and hilarious take on the concept—particularly with Beavis and Butt-Head both hilariously impersonating the ex-con’s accent. (Part of me wishes the characters had been active when reaction videos to viral NSFW videos were en vogue. Perhaps this season, we’ll get “Two Girls, One Beavis”? A series fan can dream.)