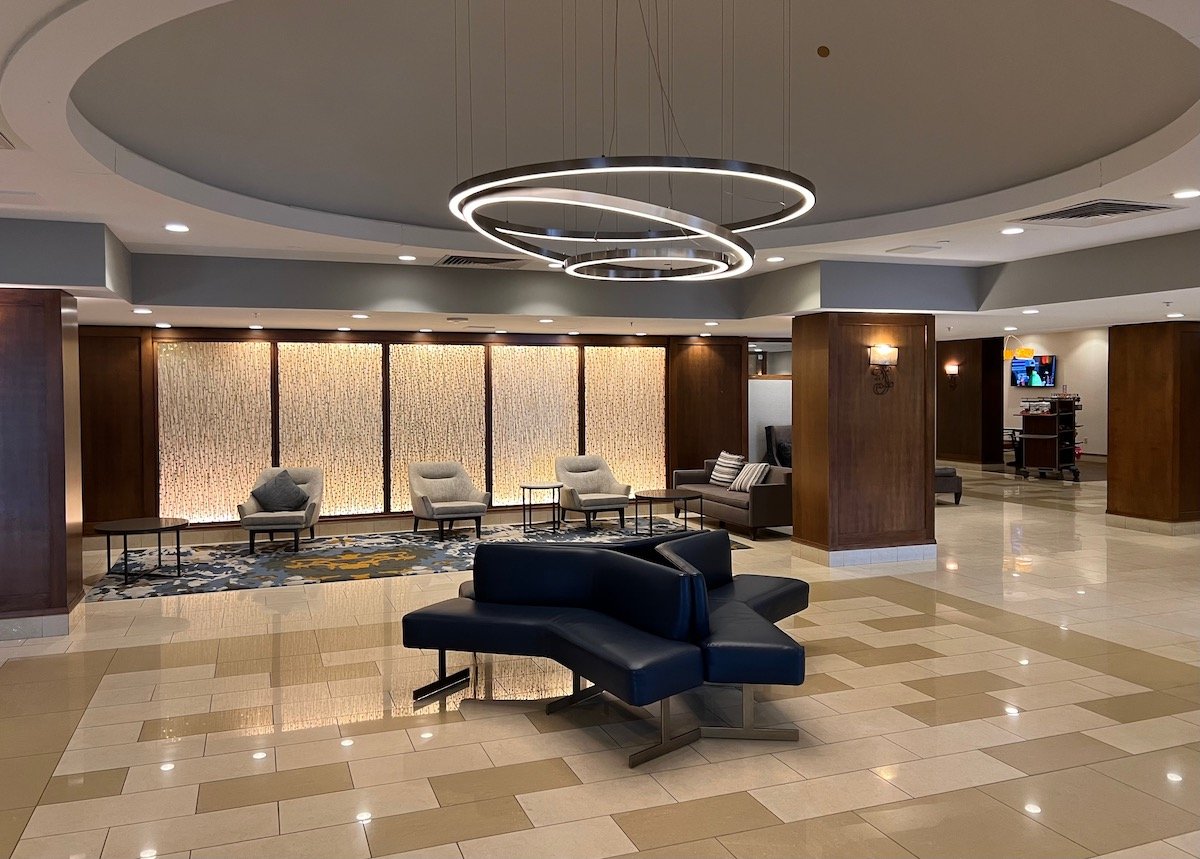 We recently spent a few nights at the 430-room Boston Marriott Newton. Even though I’m a Marriott Bonvoy Titanium member, this was my first stay at a “standard” Marriott in the United States for as long as I can remember (I generally avoid Marriotts domestically). However, this hotel had a convenient location for where we needed to be.

So, with all the cost cutting we’ve seen at hotels in the United States since the start of the pandemic, how was the stay? Not bad, surprisingly…

For our early August stay, the Boston Marriott Newton was charging ~$190 per night plus tax.

We paid cash, though as a point of comparison, the hotel would have cost 39,000 Marriott Bonvoy points per night if redeeming points. I value Bonvoy points at 0.7 cents each, so paying cash was definitely the better deal, as I prefer saving my points for higher value redemptions.

The hotel markets itself as the “Boston Marriott Newton,” though you’re not going to want to stay here if you want to visit the city of Boston, whether for business or leisure. Rather this is a hotel off a highway that’s near all kinds of businesses and commercial parks that have offices in the Newton area, just outside of Boston.

If you’re staying here, plan on having a car or ride sharing, since the area isn’t ideal for walking. Fortunately parking is free if you come by car. The hotel is around 20-30 minutes (depending in traffic) from both the city of Boston and Boston Logan Airport (BOS).

While the hotel underwent a significant interior renovation in 2017, the exterior of the property could still use some love, in my opinion.

While the hotel is a bit outdated from the outside, the interior is fairly modern, especially the lobby. Inside the entrance and to the left were two reception counters, while the rest of the lobby consisted of a few different seating arrangements.

I was thanked for being a Bonvoy Titanium member, and we were upgraded to a room with a balcony (this hotel has very few suites, so I wasn’t expecting a further upgrade). It was also explained that on account of my status we’d receive access to the club lounge. However, the club lounge is only open in the evenings, so we could have breakfast in the restaurant. That worked for us, and gave us the best of both worlds.

For what it’s worth, the hotel has seven floors, and the lobby is actually on the fourth floor. That’s because the hotel is built into a small hill, so the side of the hotel you enter on is a bit elevated. We were assigned a room on the second floor.

Once we were down on the second floor, we followed the signage in the direction of our room, #229. The room was about halfway down the hall and on the left.

The room was pretty much brand standard for Marriott. I think this is often the issue with reviewing chain hotels that have cookie-cutter design. The room was exactly what you’d expect for a (fairly) recently renovated Marriott. On one side of the room was a king size bed and a chair with a lamp.

On the other side of the room was a desk with a rolling chair (it’s nice to see those in Marriott rooms, since many hotels have eliminated desks), a wall-mounted TV, and a luggage rack. There was also a minibar setup with a coffee machine and an empty mini fridge.

The bathroom had a sink, toilet, and shower & tub combo, and was absolutely tiny, to the point that you basically had to be touching the toilet with your leg in order to use the sink. On the plus side, the water pressure in the shower was pretty decent.

Toiletries were from both Pharmacopia and thisworks, and were pretty decent.

One thing that stood out to me about the room was the “popcorn” ceiling combined with a bad paint job, which definitely didn’t feel very premium, and doesn’t match the rest of the renovation.

The room also had a balcony, with two chairs and a side table.

The hotel overlooks the Charles River, though our room just looked at a very big tree, plus a permanent(ish) tent that was presumably set up for events.

All-in-all the room was perfectly nice, and did the trick. When the hotel was renovated in 2017, I think the press release about the new rooms being the “pinnacle of luxury” is probably a bit of an exaggeration, but… 😉

As a Bonvoy elite member I received premium internet for free, which was fast. The hotel also offers daily housekeeping, but only on demand. You couldn’t request it in advance, but rather each morning you had to let the front desk know if you wanted housekeeping.

As mentioned above, the Marriott Newton has a club lounge on the seventh floor. At the moment it’s only open Sundays through Thursdays from 5PM until 10PM. It’s not open during the day, and clearly the days of the week are designed around business travelers.

It’s sad how low our expectations as consumers have become as a result of coronavirus, but I remember thinking to myself “wow, how generous that they’ve opened the club lounge,” given how many other hotels haven’t.

The lounge itself was what you’d expect from a Marriott. There were some tables with a couple of chairs each, some booths, and some high-top seating near the windows.

What drives me bonkers about club lounges in the United States is how they assume everyone wants to watch TV. There were two TVs on in the lounge playing different things, both at very high volumes. Am I the only one who wishes club lounges would go for a more relaxing ambiance? Why not play some calming background music, or something?

The food spread was put out shortly after 5PM. Admittedly the quality of club lounges varies greatly around the globe, so this one was pretty standard for a domestic property.

The evening food selection consisted of a few types of packaged snacks (chips and granola bars), plus three fresh options.

These options alternated slightly every evening, but generally included some kind of salad, some kind of fruit, and some kind of veggies (in some cases with cheese). While the selection was limited, frankly I appreciated that the options were fresh and reasonably healthy. Other properties have much less healthy options, with things like pigs in a blanket, fried spring rolls, and nachos with cheese. So kudos to the hotel for that, at least.

In terms of drinks, there was complimentary bottled water and soft drinks, plus a coffee station.

As it standard at Marriotts in the United States, drinks were with an honor bar system, and cost $6-9 each.

The bright point of the club lounge was the attendant, who had such a good attitude and was eager to please (sadly I forgot to write down her name, but she worked every night). Nonetheless it’s kind of amazing how the quality of club lounges varies based on the brand you’re staying at and where in the world you are.

Riverbend Bar & Grill is the Marriott Newton’s all-day dining restaurant, located on the lobby level (the fourth floor). Breakfast is served here each morning from 7AM until 11AM, and since the club lounge isn’t open for breakfast, we could eat here instead. This space had both a lounge and bar area, and then deeper in was the restaurant.

You can find the breakfast menu below.

We were given breakfast vouchers for the buffet, which ordinarily retails for $20 per person. Again, it’s a reflection of the low expectations I have of many Marriotts, but I appreciated that they gave us the full breakfast. Many Marriotts would try to offer elite members a continental breakfast, so that there’s an upcharge for the full buffet.

Cooked-to-order omelets were also available at no extra cost, so I had a veggie omelet each morning.

Also on the lobby level, the Marriott Newton has a Starbucks kiosk. It has fairly limited hours — it’s open from 6:30AM until 11AM on weekdays, and from 7AM until 12PM on weekends. I appreciate when hotels offer easy access to coffee, so this was a great option to have, whether wanting a hot or iced coffee. I just wish the hours were longer, because as an early riser, 6:30AM doesn’t really cut it!

There was also a gift shop of sorts next to the coffee kiosk, where you could purchase a drink or snack. This was available even when the Starbucks kiosk was closed, and they could just ring you up at the front desk.

The Marriott Newton has both a gym and pool on the second floor, and this was right down the hall from us. The gym had a good selection of equipment. I don’t think the hotel was very full during our stay, so it was nice to almost always have the gym to ourselves. However, this is a 430-room hotel, so I imagine when it’s busy this place could get very crowded.

There was also an indoor pool. I’m not much of a pool guy even at a nice resort, let alone an indoor pool at a business hotel. I imagine some families appreciate this amenity, though, especially in winter.

The Marriott Newton is a perfectly decent business hotel, if you have a need to be in the area. The hotel is huge and cookie-cutter, but that’s kind of what you expect from your average Marriott in the US, right?

On the plus side, the staff at the hotel were friendly, and I appreciate that the hotel’s club lounge is open in the evenings, and that elite members receive a full (hot) breakfast in the restaurant in the mornings. That’s how it should be, but it’s also an area where some other hotels are much stingier.

I certainly wouldn’t go out of my way to stay here again, but if I needed to be in the immediate area, I wouldn’t hesitate to return.