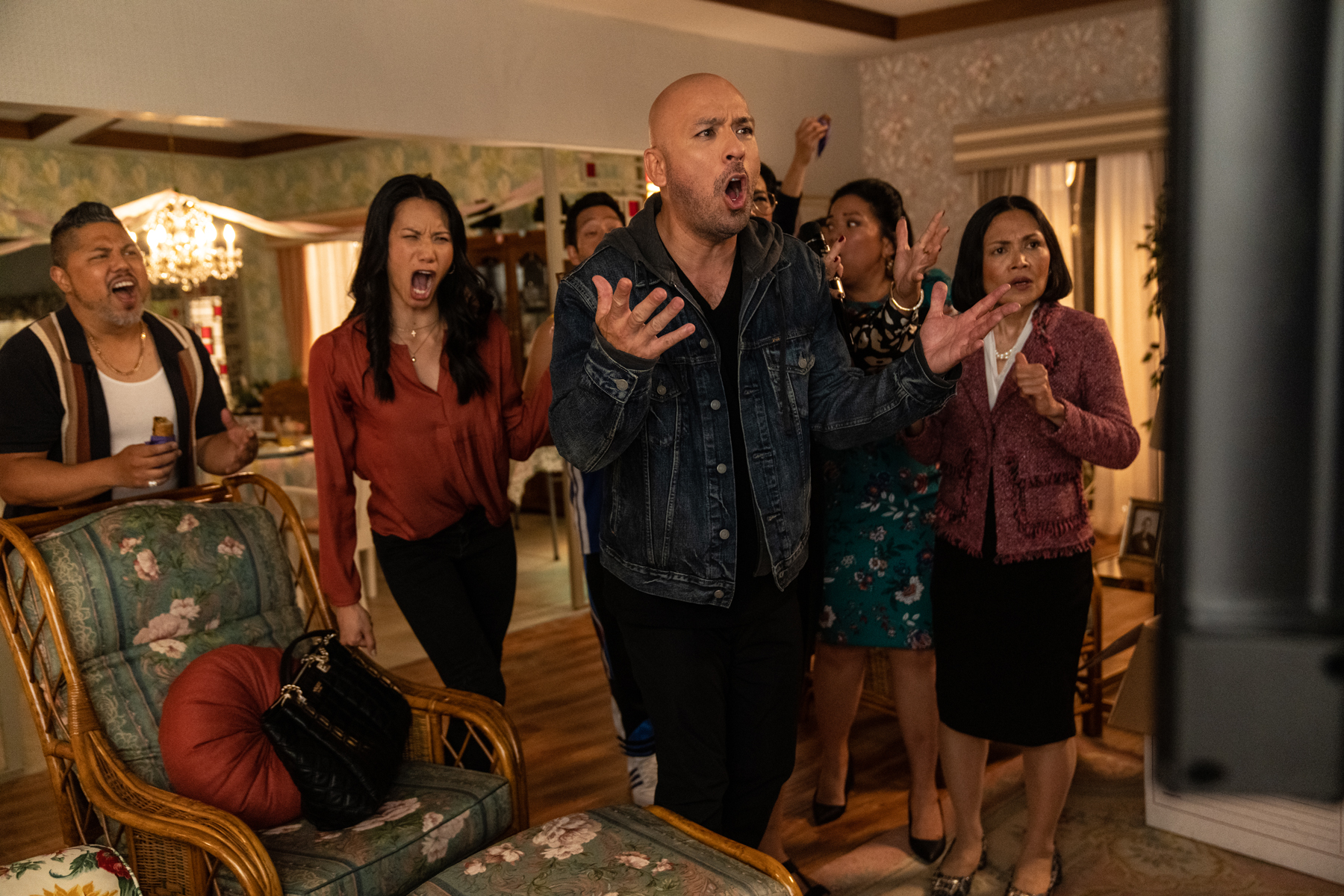 If anyone deserves a sitcom, it’s Jo Koy. The definition of a working comic, the stand-up comedian tours constantly, hits all the late-night shows, and pumps out special after special, selling out theaters all the while. And yet, Koy has never been able to break out of his (presumably quite lucrative) rut. All he needs is that one big crossover star vehicle, a la Amy Schumer (Trainwreck) or Kumail Nanjiani (The Big Sick), right? Right??

That’s what Easter Sunday is clearly designed to be, and unfortunately, it doesn’t seem like Koy is going to be exiting that rut just yet. It may take place on the holiday in the title, but it could really be about any obligatory family gathering where you can’t eat until after church. (It’s why it doesn’t matter that it’s coming to a theater near you in August.) Culturally, the film is more specific, capturing the arguments, eccentricities, and lavish spreads of Filipino-American family life — also a common topic in Koy’s stand-up. On stage, he embodies his entire family, imitating their voices and personalities in a colorful one-man show. Here, that charisma is spread out over a large ensemble cast, rendering the man himself less interesting by comparison. The movie even seems to knows this, giving Koy a stand-up scene that doesn’t make a lot of sense in context — but does inject the movie with some much-needed energy.

And Koy’s on-screen alter ego, Joe Valencia, is a lot like performer himself, or at least a version of him. Harried and hard-working, he does his best to be there for his teenage son Joe Jr. (Brandon Wardell), but rarely succeeds. An early scene shows Joe struggling — and failing — to make it to a parent-teacher conference discussing Joe Jr.’s abysmal grades, a meeting he misses because he’s across town at a second callback for the sitcom role that could change his life. His ex-wife (Carly Pope) isn’t terribly sympathetic. He pulls this shit all the time.

As if being an absentee dad straight out of a Nineties family film wasn’t enough, Joe is also under constant pressure from his mom Susan (Lydia Gaston), who hides her insecurities behind a strident taskmaster facade. This is a Filipino thing, the movie explains, as are feuding aunties, karaoke parties, Lou Diamond Phillips, and creepy statues of the Santo Niño that seem to follow you around the room with their eyes. Easter Sunday tries to thread the needle between in-jokes for those in the know and explanations for the uninitiated, often at the risk of being hokey to a fault. (At one point, supporting player Eva Noblezada dutifully explains that the shaved-ice dessert halo-halo epitomizes Filipino culture: “Extra, with so much piled on.”)

An affable fount of corny dad jokes, Joe is eclipsed by the film’s wackier supporting characters once he and Junior drive from Los Angeles to the Filipino enclave of Daly City, CA. for a holiday visit with the family. Chief among these is his loser cousin Eugene (Eugene Cordero), who blew the $20,000 Joe gave him to start a taco truck on designer shoelaces and a colorful paint job for his so-called “Hype Truck.” This sparks a manic subplot about a race to scrape up $40k in a single afternoon in order to save Eugene from the diminutive wrath of small-time gangster Dev Deluxe (Asif Ali). Eugene’s plan is to unload a stolen pair of boxing gloves that once belonged to boxer Manny Paquiao. Joe agrees to help, under one condition: The gloves have to go to a Filipino.

Tiffany Haddish, ever the deep-bench MVP, provides some of the film’s biggest laughs in a small role as Joe’s ex, who’s since become a cop and relishes her newfound ability to put her old boyfriend in his place. Other bits pay off as well: Joe just can’t get away from his most successful work to date as a beer-commercial pitchman, and the film gets a lot of mileage out of him politely tolerating people repeating his catchphrase back at him. On the whole, however, the humor is more bemused smirk than belly laugh. The same things that make Koy a unique comedic presence — his agreeability, his unabashed sentimentality — also make him an awkward fit for contemporary film comedies and their emphasis on action. (When did gunplay become a prerequisite for a Hollywood studio comedy?) That’s where prolific director Jay Chandrasekhar (Super Troopers), who also appears in a small role as Joe’s agent, steps in to give Easter Sunday some oomph.

But the parts of that feel the most real are the maudlin ones, including what’s arguably the movie’s most culturally specific message: That children should be understanding of their parents’ sacrifices and, as Noblezada puts it, not be “little bitches” when Dad misses a track meet or whatever. This, more than shots panning over tables groaning with empanadas, adobo, lechon, and pancit palabok, says something about the complicated blend of guilt, resentment, gratitude, and nurturing that make up the Filipino-American family experience.

It’s clear that Jo Koy loves his relatives, and wants the world to know it. It’s just that his style would be better served within the more earnest confines of a traditional multi-cam sitcom. His character’s longing for a regular job where he’s home in time for dinner reads like a subconscious plea to Hollywood, and makes the film’s ending feels like wish fulfillment. Hopefully some studio executive out there will take the hint.