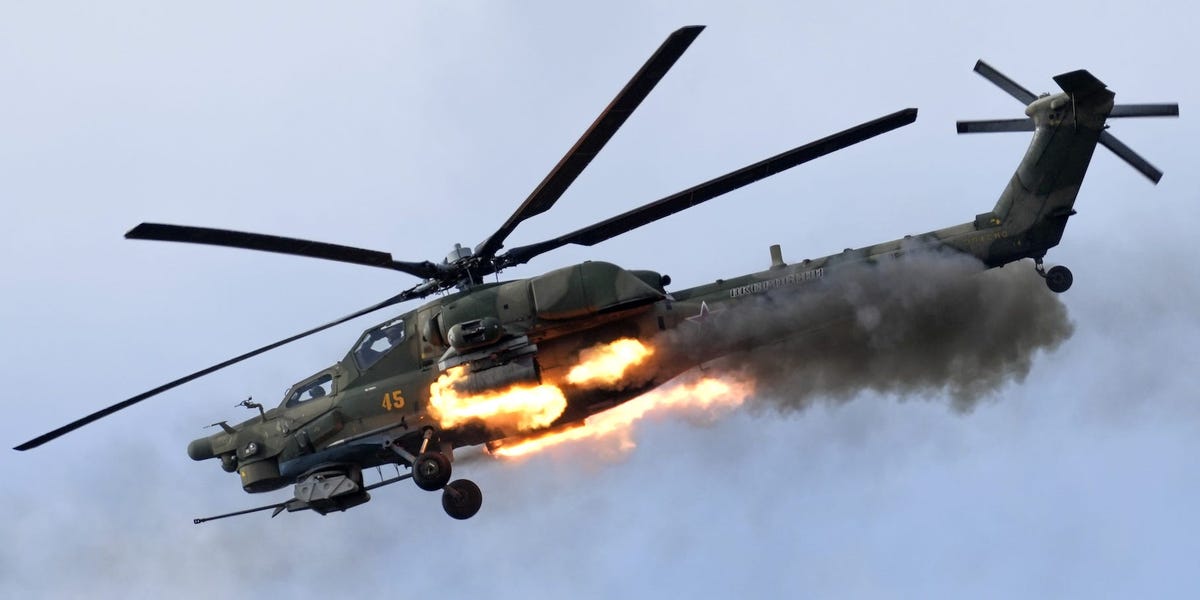 The skies over Ukraine remain fiercely contested six months since Russia’s launched a renewed attack on its smaller neighbor.

The struggle for air superiority has upended pre-war assumptions about Russian aerial prowess, but the scale and sophistication of anti-aircraft weapons in use has made the air war costly for both sides.

Russian and Ukrainian jets are occasionally spotted in combat, and the Pentagon has confirmed that Ukraine is using US-made anti-radiation missiles against Russian air defenses, but fixed-wing jets aren’t the only aircraft flying and fighting over Ukraine.

Transport and attack helicopters have played a key role despite suffering high losses.

As with their fixed-wing fleets, Ukraine and Russia operate a number of similar helicopters, which is unsurprising given their shared Soviet history and Ukraine’s prominence in the Soviet defense industry.

In 1977, the Soviets introduced an upgraded version of the Mi-8 better suited for higher altitudes and hotter climates. Known domestically as the Mi-8M, it is exported as the Mi-17 and has more powerful engines and air filters on its turbine air intakes. The Mi-8M’s tail rotor was also moved to the left side of the tail.

The dozens of Mi-8/Mi-17 variants can perform an array of missions, including transport, reconnaissance, attack, and command-and-control.

The helicopters require a crew of three — a pilot, copilot, and flight engineer — and have an internal payload of about 8,000 pounds, allowing them to carry 24 troops. Armed variants can be fitted with small wings that have four to six hardpoints, enabling them to carry rockets, guns, and anti-aircraft or anti-tank missiles.

The Mi-24 entered Soviet service in 1972 and has become one of the most recognizable military helicopters. Known to NATO as the “Hind,” It has a crew of two (a pilot and weapons operator), a ceiling of over 14,000 feet, and a top speed of about 200 mph.

An Mi-24’s armament depends on the variant — of which there are many, including one for VIP transport — but it can carry over 3,000 pounds of external ordnance. Its two stub wings have four hardpoints that can be fitted with guns, rockets, and anti-tank and anti-aircraft missiles.

The Mi-24’s nose-mounted turret can be fitted with a multi-barreled machine gun or single or double-barreled autocannon. Some variants also have side-mounted cannons. The Mi-24 also has small cabin that can carry up to eight troops.

Its thick armor, heavy armament, and low, fast attack runs have earned the Mi-24 a reputation as a “flying tank.”

Ukraine had about 35 Mi-24s in service before the war, and the Czech Republic has donated several more since the war started. Russia had over 170 Mi-24s and Mi-35s, the latter a variant made for export, in service prior to the war.

Ukraine’s helicopter inventory has remained largely the same since the end the Cold War, but Russia has made efforts to modernize its helicopter force.

One of the most notable additions was the Kamov Ka-52 Alligator attack/scout helicopter, which entered service in 2011. Known to NATO as the “Hokum B,” it is an improved two-seat version of the Ka-50 Black Shark attack helicopter, which was introduced in 1995.

The Ka-52 has a ceiling of 18,000 feet and a top speed of 186 mph. It also has a number of unusual features, including coaxial rotors, side-by-side cockpit seats, and ejection seats for its pilots.

Its six wing-mounted hardpoints can carry more than 4,000 pounds of rockets, missiles, or guns and ammunition. A 30mm autocannon is also mounted on the right side of the fuselage. Some variants have a nose-mounted forward-looking infrared (FLIR) camera as well.

The Mi-28 has a crew of two, a 30mm nose-mounted gun, and four hardpoints under two stub wings that can carry rocket pods and anti-aircraft or anti-tank missiles. The nose also usually has a FLIR camera. Some variants have a radar on top of the rotor, like the US’s AH-64D Apache.

There are multiple variants of the Ka-52 and Mi-28, and both continue to receive upgrades, such as cameras, electronics, and cockpits and helmets compatible with night-vision.

Ukraine and Russia have both used helicopters since the first day of the war.

In the opening hours of Russia’s invasion, dozens of Russian Mi-8s loaded with hundreds of paratroopers and supported by Ka-52 attack helicopters swarmed the airport in Hostomel in an attempt to seize the airstrip and allow transport planes loaded with troops and equipment to land for an assault on nearby Kyiv.

The Russians ultimately withdrew from the airport in Hostomel, and the attack dealt an early and lasting blow to Russia’s elite VDV paratrooper corps.

Ukrainian Mi-24s helped repel the invaders at Hostomel and were even seen conducting a daring raid on a fuel depot inside Russia in April.

Sixteen Ukrainian Mi-8s were involved in seven equally daring resupply and medevac missions for Ukrainian troops at the Azovstal steel plant, who were cut off during Russia’s siege of Mariupol. At least two helicopters were shot down during those missions.

As the war has progressed, both sides have taken significant helicopter losses in combat. Many videos have appeared of Russian Mi-24s, Mi-28s, Mi-8s, and Ka-52s being shot down. Ukrainian soldiers have even recorded themselves downing Russian helos with anti-tank missiles.

As the war drags on and losses mount, Ukrainian and Russian helicopters have adopted new tactics to avoid detection and enemy fire, including flying extremely low and firing volleys of unguided rockets from longer ranges.