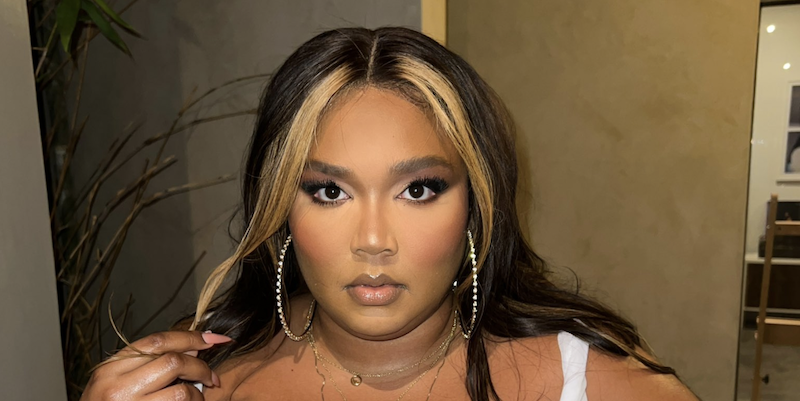 Lizzo has reminded us that she’s a goddess.

The “Rumors” singer stepped out in a very trendy look for Kanye West and Drake’s Free Larry Hoover concert in LA last week. For the event, the star donned a custom two-piece dress by Di Petsa, a version of the brand’s “wet look” style. The outfit by the Grecian brand also called back to the star’s latest video, where she transformed into a deity.

Styled by Jason Rembert, the all-white outfit included a corset top with a square neckline and a sheer, strategically-draped skirt. The star also wore a wet hairstyle with blonde highlights, and finished the look with matching white sneakers, gold jewelry, and a Louis Vuitton monogram wristlet.

The “Truth Hurts” singer is the latest celeb to step out in Di Petsa’s goddess-evoking look. Designer Dimitra Petsa has also dressed several celebs including Bella Hadid, Megan Fox, and Chloë since her first “wet dress” was debuted in 2018.

Lizzo recently made an appearance at another pop star’s highly-anticipated comeback performance. She was part of the star-studded audience for Adele’s One Night Only concert special, which was filmed at LA’s Griffith Observatory. The “Juice” singer told People that she and Adele became friends after bonding over similar experiences.

“I met her at a birthday party or a Grammy party — I can’t remember where because I was drunk at both,” she said. “She’s been through similar things that I have, and she’s given me really good advice. We have very similar personalities and the way we think, and we just connected in that way. We’re both supreme divas. We know our worth — and we’re also both Tauruses!”