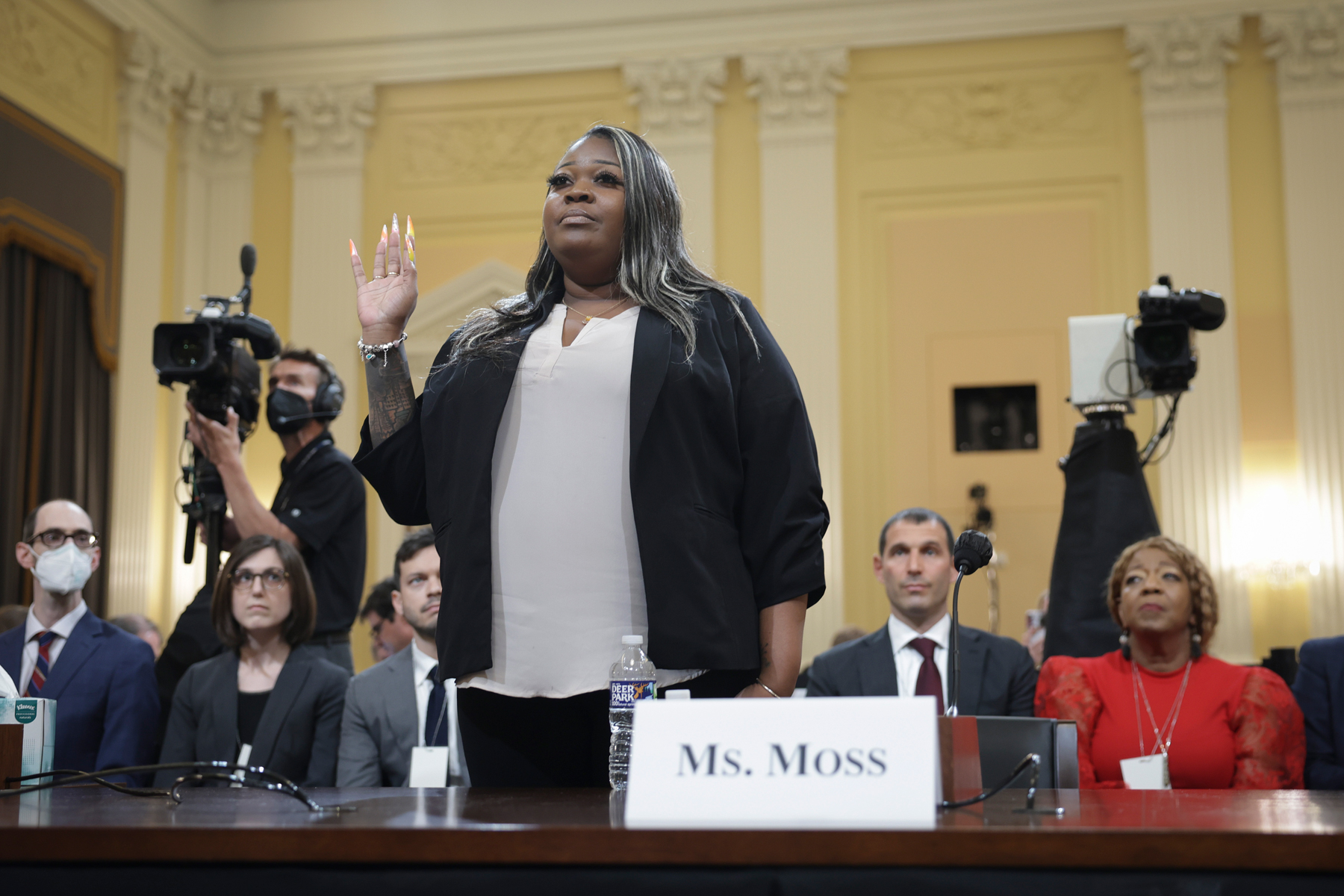 Former Georgia election worker Wandrea ArShaye “Shaye” Moss testified before the Jan. 6 committee on Tuesday, detailing her and her family’s experience with violent threats and harassment following unfounded allegations made against her by President Trump, Trump’s lawyer Rudy Giuliani, and other Trump campaign allies.

Before the committee Moss discussed the cataclysmic effects the conspiracy theories Trump leveraged against her had on her life. “It has turned my life upside down.” Moss testified, “I don’t want anyone knowing my name […] I just don’t do nothing anymore, I don’t want to go anywhere. I second guess everything that I do. It’s affected my life in a major way, in every way. All because of lies.”

Moss: “It has turned my life upside down … I haven’t been anywhere at all … I just don’t do nothing anymore … I second guess everything that I do … all because of lies for me doing my job.” pic.twitter.com/xrB083jrCX

Moss recounted the chilling threats made against her by Trump supporters galvanized by the Trump campaign’s false claims against her. One harasser told Moss that she and her mother should “hang for committing treason.” Another told her to “be glad [it’s] 2020 and not 1920.” According to Moss, people went to her grandmother’s home and attempted to “burst down the door and conduct a citizen’s arrest of my mom and me.” According to Reuters, in December of 2020 Freedman made a series of panicked phone calls to police after Trump supporters repeatedly harassed her in her home.

Moss worked for Fulton County as an election worker in the Department of Registration and Elections. Her mother, Ruby Freeman, joined her in the department as a temporary election worker for the November 2020 presidential election. In the months following the election, Moss and her mother became the targets of conspiracies claiming they had a hand in manipulating vote tallies in Fulton County, Georgia.

Trump and his allies accused Moss and other Georgia election workers of having lied about a water main break in order to kick out poll watchers, counting ballots multiple times, and sneaking extra ballots into State Farm Arena, where votes were being counted. During questioning, Rep. Adam Schiff (D-CA) played footage of Rudy Giuliani accusing Moss and her mother of exchanging a “USB drive” full of votes. When asked by Schiff what her mother had passed her Moss replied “a ginger mint.”

Rep. Adam Schiff (D-CA): “Mr. Giuliani accused you and your mother of passing some sort of USB drive to each other. What was your mom actually handing you on that video?”

The clip demonstrates how Moss and her mother became public scapegoats for the Trump campaign’s crusade to cast doubt on the 2020 election results. At a Dec. 2020 rally in Georgia, Trump played surveillance footage from State Farm Arena for a crowd of furious supporters. Days before the Jan. 6 attack on the Capitol, Trump railed against Freeman in a call to Secretary of State Brad Raffensperger and other Georgia election officials.

Through her written statement, Moss implored the committee to take action to protect election workers and victims of disinformation, stating that: “Because of the lies, I’ve lost who I was. I will never again be able to do the work I felt called to do. My life will never be the same. […] And I’m here to tell my truth to help [make] sure this never happens to anyone else. My loss has got to be for something.”