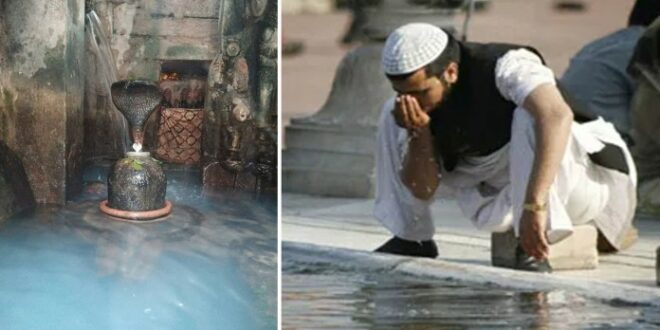 The videography survey ordered by the court at the Gyanvapi mosque-Shringar Gouri complex, beside the Kashi Viswanath temple, in Uttar Pradesh was almost complete yesterday. The survey revealed the presence of three Shivalingas, some hidden floors underneath the ground and three gopurams, apart from a religious lake on the premises of the mosque.

The petitioners’ advocate told the media that a Shivalinga was spotted in the mosque lake. Following this, the court ordered for extra security and more police bandobust at the complex. It also directed the officials to file cases under strict laws against protestors, if any. The entire area has been cordoned to prevent commoners from entering the complexThe Varanasi civil court directed for a three-day survey. However, the exercise was completed a day ahead of the schedule.

Responding to this revelation, the government lawyer said that a report would be prepared by three members of the commission appointed to look into the issue and that it would be submitted to the court by the advocate commissioner.

Five women, including one from Delhi and four from Varanasi, filed a petition in the Varanasi court seeking permission for worshipping the figures of Hindu gods engraved on the outer side of the Gyanvapi mosque’s wall regularly. Responding to this, the Varanasi civil judge court ordered for the videography survey.

Meanwhile, another petition opposing the survey in the Gyanvapi mosque complex is being heard in the Supreme Court.

The BJP cadre in Varanasi burst into celebrations after the officials revealed that a Shivalinga measuring 12 feet by 8 inches diameter was found in the mosque lake. The cadre burst crackers and raised slogans ‘Not a Masjid but a temple’. Sensing that the situation could spiral out of control, the police dispersed the mob from the place.