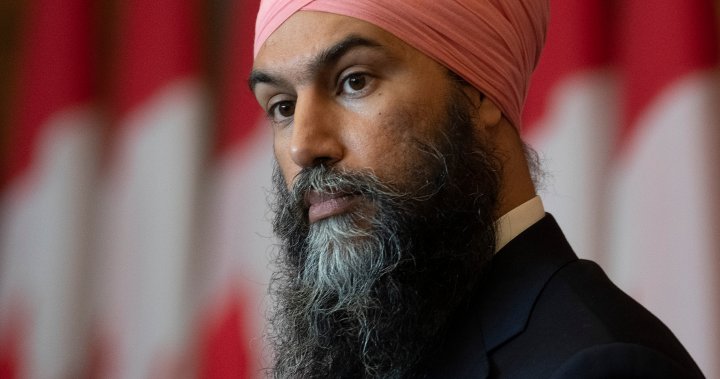 Taxpayer dollars should be used to improve services and pay competitive salaries in Canada’s public health-care system, not to enrich corporations that are charging governments a premium to gain profits, Singh said during a press conference in Toronto Wednesday.

“It’s becoming very clear now that we are in a very serious crisis and it is not good enough for premiers to start talking about creative solutions when their solution is to privatize our health-care system,” Singh said.

“We’ve got a mixed system — our public dollars, our taxpayer dollars, end up going into the pockets of rich corporations, enriching people instead of going to the care of our loved ones. And we can’t allow that to happen.”

Singh’s concerns stem from the unveiling late last week of Ontario’s plan to address significant pressures within the province’s health system. These pressures have led to multiple emergency department closures over the last two months and what front-line workers describe as a mass exodus of health-care workers, notably nurses, due to heavy workloads, burnout and concerns about a one per cent wage cap on health workers imposed by Doug Ford government’s controversial Bill 124.

As part of its plan, the Ford government said it plans to increase publicly covered surgeries at private clinics, citing the need to be “bold, innovative and creative” when looking for ways to improve the health system.

In addition, Ford travelled to New Brunswick earlier this week for a meeting with the three Progressive-Conservative Maritime premiers. After this meeting, the four provincial leaders stressed the need for health-care delivery to “fundamentally” change in Canada.

When asked if this means adopting measures now being pursued in Ontario, including hiking public funding for private health services, New Brunswick Premier Blaine Higgs said “all options are on the table.”

Singh says he sees this as Ford travelling the country, selling the idea of increased privatization of health care.

“That’s what we want to defend and that’s something that’s really important to me.”

The New Democratic leader called for Prime Minister Justin Trudeau to meet with premiers to discuss their calls for more health-care funding, and pointed to other ways the federal government could help address nationwide shortages of health-care workers.

He also called on Ottawa to open an accelerated immigration pathway for health professionals who want to come to Canada to work. Then, once they are in Canada, the federal government should do more to work with provinces to ensure these internationally educated health workers are able to fast-track their accreditation to allow them to work in Canadian hospitals and clinics, Singh said.

“The accelerated pathway for front-line health-care workers is a simple fix that the federal government can do immediately,” he said.

But Immigration Minister Sean Fraser said Wednesday that Ottawa already initiated a process to prioritize health-care worker immigration applications at the onset of the pandemic.

Fraser also took issue with Singh’s characterization of immigration and accreditation of foreign-trained health workers as an easy solution to Canada’s health human resource problems, calling it “too simplistic.”

2:06
Foreign doctors anxious to help on front lines in Ontario

Yes, the issue of recognizing international credentials needs to be tackled, he said, but this falls within provincial jurisdiction. This authority has, in turn, been “shipped off” to regulatory colleges, Fraser said.

“The challenge for us federally is that we don’t necessarily have the legislative stick when it comes to health-care workers, the provinces do. But that doesn’t mean we don’t have a carrot to use as an incentive,” he said.

Ottawa is committed to working with the provinces and territories to “make sure when they are prepared to use the legislative abilities they have, that we’ll be there to deliver financial support for institutions who provide training,” he added.

— with files from The Canadian Press