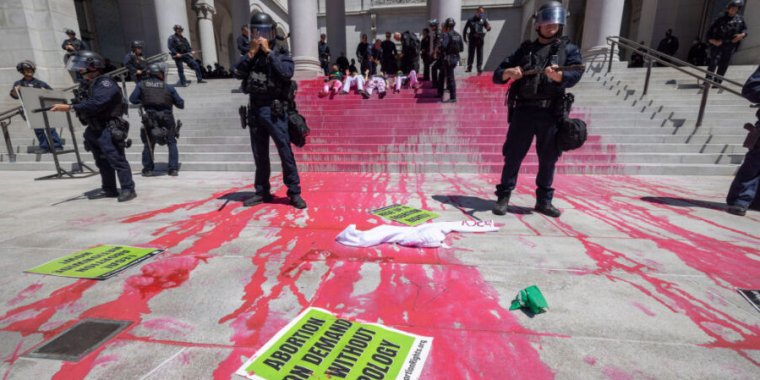 It’s not clear yet what role tech companies will play in helping police access data to prosecute abortions in post-Roe America, but it has already become apparent that law enforcement is willing to be sneaky when seeking data.

Cops revealed one potential tactic they could use back in June, when Meta faced scrutiny from reproductive rights activists for complying with a search warrant request from police in Madison County, Nebraska. The Nebraska cops told Meta they were investigating a crime under the state’s “Prohibited Acts with Skeletal Remains.”

But what they were actually investigating was a case involving a woman, Jessica Burgess, who was suspected of aiding her 17-year-old daughter, Celeste Burgess, in procuring an unlawful abortion in the state at 23 weeks. The mother and daughter previously told police that Celeste miscarried, but—in part because of data Meta supplied—the mother is now being prosecuted for unlawfully aiding her daughter in an abortion. Celeste is being prosecuted as an adult for other crimes.

Meta seemed blindsided by criticism over its decision to comply with these Nebraska warrants. At the time, a Meta spokesperson told Ars that “nothing in the valid warrants we received from local law enforcement in early June, prior to the Supreme Court decision” overturning Roe v. Wade, “mentioned abortion.”

Some of Meta’s toughest critics didn’t buy into Meta’s explanation. Civil rights litigator Cynthia Conti-Cook and Digital Defense Fund (DDF) director Kate Bertash, both experts tracking digital surveillance of abortion, wrote in the Los Angeles Times that Meta could have discovered the true intentions of the investigation if the company had followed its own policies and reviewed the data before sharing it with law enforcement.

Facebook had the option there, the op-ed suggested, to lean on its policy to “conduct a careful review of each law enforcement request to disclose user data for consistency with international human rights standards.” Because the United Nations protects access to abortion under international human rights law, Facebook could potentially have fought the warrant from Nebraska police, these experts claimed, but it did not.

The op-ed didn’t specify, however, what legal basis there would be for a US-based company like Facebook to argue in a US court to uphold its own policies adhering to international human rights laws when those policies seem to conflict with US laws. The experts pointed in the op-ed to the Convention on the Elimination of All Forms of Discrimination against Women, a 50-year-old agreement that includes the right to abortion access—which the US famously signed but never ratified, the United Nations recently noted.

DDF does not respond to any press requests, and Conti-Cook told Ars that “Facebook should be the one to explain whether and how they apply their policies about considering international human rights standards to legal requests, as their website promises users, or whether those promises are meaningless and not applied equally in the US.” Meta did not respond to multiple requests to clarify whether its policy means it will only push back against law enforcement requests violating international human rights standards that align with US laws.

Lawyers representing Celeste and Jessica Burgess did not respond to Ars’ requests for comment. For many following their story, though, the mother and daughter’s data seizure became a prime example of how Big Tech companies would help law enforcement investigate abortions. Because of digital surveillance, experts say that abortion in post-Roe America could be prosecuted at levels unprecedented in US history because, without digital surveillance, abortion has been historically harder for police to track.

But just because Big Tech companies collect the most information on Americans, that doesn’t mean Facebook or Google will inevitably be the primary force driving abortion-related arrests. As abortion access becomes further restricted nationwide—and new legal gray areas emerge as other states pass laws attempting to protect access—the courts will have to decide which laws stand up against the others and which evidence is compelling. There will likely be other kinds of tech not yet widely known that could prove more useful to police in conducting abortion surveillance and winning guilty verdicts. A staff technologist and privacy advocate for the Electronic Frontier Foundation (EFF) tracking abortion-related privacy concerns, Daly Barnett, told Ars that even before Roe v. Wade was overturned, it was already “a constant battle” for privacy experts struggling to keep up with “what new surveillance technologies law enforcement is abusing.”

The EFF recently revealed one example of a new surveillance technology granting cops access to data that nobody knew they had. A joint investigation from the EFF and the Associated Press brought to light police software called Fog Reveal, which EFF described as a potentially illegal tool that police were trying to keep secret.