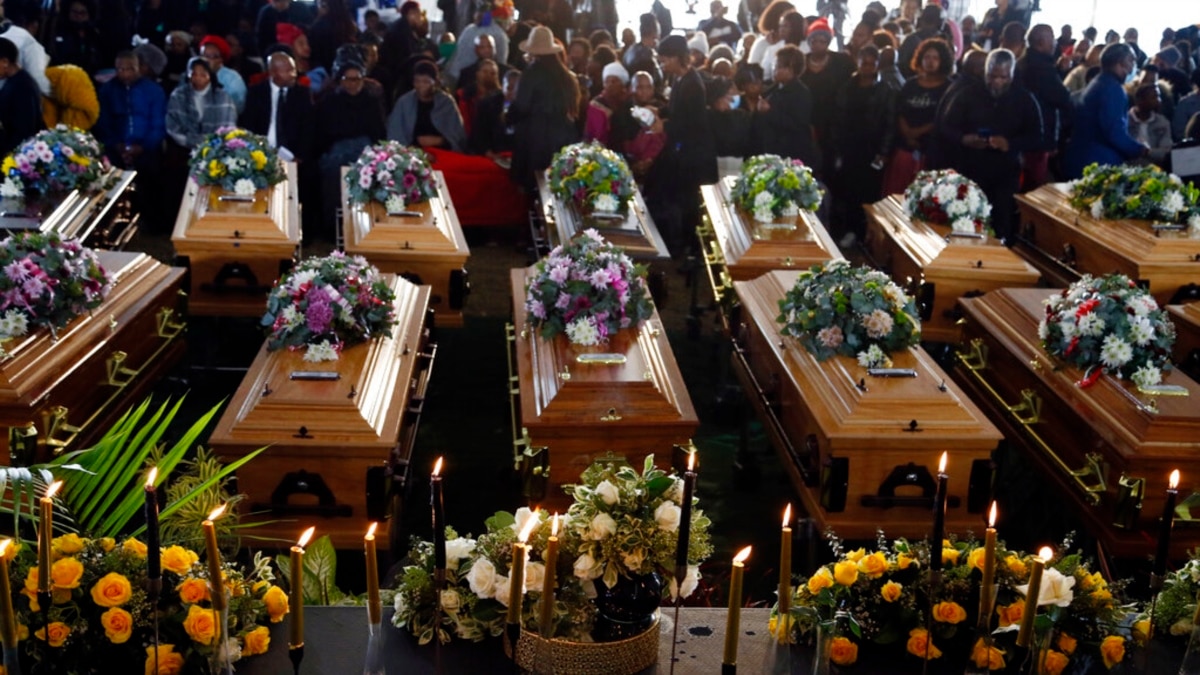 Investigators said the teenagers likely were poisoned by something they ingested, while some reports indicated a gas leak might have been responsible.

Colorful bouquets adorned coffins for 19 of the victims. All were empty, according to the Reuters news agency, because police were still investigating what caused the deaths.

Reuters reported the other two victims had already been buried by their families.

More than a week ago, the lifeless bodies of the 21 youths, the youngest of whom was just 13, were found slumped over chairs and tables at an East London bar, while others died on the dance floor.

For the funeral Wednesday, a massive tent was erected on the Scenery Park Sports Field. Relatives and friends paid tribute.

“He loved sport. He played soccer at school,” a person said of one victim.”He suddenly passed away on the 26th of June, 2022. He will be deeply missed by his family, friends and all those who knew him.”

In his eulogy, Ramaphosa said that while the cause of death was still unknown, the tragedy put a spotlight on underage drinking and alcohol abuse.

“Today we shed bitter tears for the 21 young lives we have lost,” he said. “We must ensure that there is justice for them. We do not want more parents to get a call in the middle of the night about the death of their child. Or being asked to come and identify their child who has passed away due to alcohol abuse. We do not want any parent to experience this type of pain anymore.”

He said since the tragedy there had been calls for the legal drinking age to be increased from 18 to 21. And he said he thought there should be a national debate on it.

He also called on marketers of alcohol not to target young people.

“Many years ago, when government embarked upon a program to reduce the harm caused by tobacco cigarettes, government was heavily criticized and met with enormous resistance,” Ramaphosa said. “Today we take it for granted that the anti-smoking laws exist and they are being complied with by the majority of our people. A similar approach matched by the necessary interventions is needed to reduce the harm of alcohol abuse amongst our young people.”

The president also appealed to mayors to set up committees to look at substance abuse in all municipalities of the country.

He also called for better implementation of the country’s laws.

“We mourn with you and we will walk this road with you,” Ramaphosa said. “What you can be sure of is that following this tragedy we are going to act as a government.”

A stampede has been ruled out as a cause of death, but there was no word on how much longer the investigation into the cause of death would take.