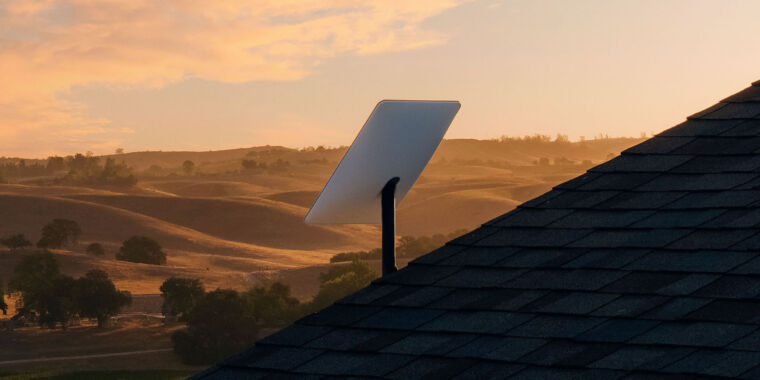 Over a year and a half after tentatively winning $886 million in broadband funding from the government’s Rural Digital Opportunity Fund (RDOF), SpaceX is still trying to get paid by the Federal Communications Commission. One problem for Starlink—though not the only problem—is a series of objections from satellite company Viasat, which says Starlink lacks the capacity and speed to meet FCC obligations.

In a new FCC filing, SpaceX denounced Viasat’s “misguided campaign” against the Starlink funding. “Viasat is transparently attempting to have the Commission impede competition at all costs to protect its legacy technology,” SpaceX told the FCC. The new SpaceX filing was submitted on Friday and posted to the FCC’s website Monday, as pointed out by Light Reading.

But SpaceX might have struggled to get its funding even if Viasat never objected. Starlink was tentatively awarded $886 million in December 2020 by the FCC during the final weeks of Chairman Ajit Pai’s tenure. Consumer advocacy group Free Press accused Pai of “subsidiz[ing] broadband for the rich,” pointing out that Starlink was awarded money in urban areas including locations at or adjacent to major airports.

Starlink service isn’t geographically restricted in the same way as wireline networks, but the RDOF and other programs require ISPs to bid on specific census blocks. Starlink won bids covering 642,925 homes and businesses in 35 states.

In addition to rural areas, SpaceX won “the right to serve a large number of very urban areas that the FCC’s broken system deemed eligible for awards,” Free Press said. A design flaw in the FCC’s mapping system made it possible to bid on subsidies in census blocks that were “surrounded on all sides by fiber.”

That RDOF auction was apparently mismanaged by Pai, as Chairwoman Jessica Rosenworcel announced in July 2021 that the agency must “clean up issues with the program’s design originating from its adoption in 2020.” The FCC cited “complaints that the program was poised to fund broadband to parking lots and well-served urban areas.”

Rosenworcel’s office sent letters to dozens of winning bidders, suggesting that they voluntarily give up portions of their funding. SpaceX was one of the auction’s biggest winners, and Rosenworcel’s FCC asked the company to give up funding in about 6 percent of the 113,900 census blocks where SpaceX tentatively won FCC grants.

The FCC letters to SpaceX and other ISPs pointed to concerns “that certain areas included in the Rural Digital Opportunity Fund auction are already served by one or more service providers that offer 25/3Mbps broadband service or otherwise raise significant concerns about wasteful spending, such as parking lots and international airports.”

SpaceX didn’t agree to give up any funding and is apparently still trying to get the full amount. While the FCC review of SpaceX’s funding is ongoing, the commission has periodically released RDOF money to various other ISPs over the past year. The FCC also recently proposed $4.3 million in fines against 73 ISPs for defaulting on their bids.