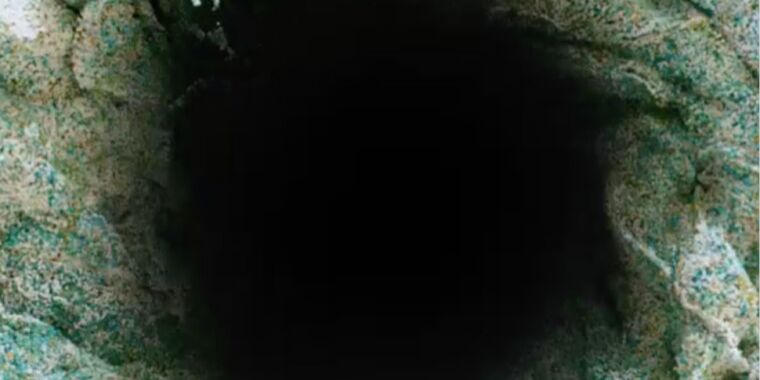 Multimedia artist, composer, and sound designer Jesse Woolston has had a recurring dream for much of his life about encountering a black hole, “falling inward, and waking up terrified.” (Who wouldn’t wake up terrified?) According to the artist, those dreams have always been a reminder to him of “nature’s terrifying awe.” Now, Woolston has channeled that emotional experience into a new multimedia installation, The Dynamics of Flow—part of an LED monolith exhibit debuting later this week at Art Basel Miami Beach. Bonus: it’s also an NFT.

My second #NFT, released on the 28th, will be part of an LED monolith installation built for the week of Art Basel.

Throughout my life, I’ve had the same dream, being confronted with a blackhole and falling inward. This installation and NFT communicates my experience. 🖤 pic.twitter.com/Kw93btpXhq

Woolston has long merged his artistic work with his love of science, aiming to “recontextualize” physics and art both visually and with sound/music. “I see scientists almost as magicians who are fantastic at understanding the world,” he told Ars. “I consider myself someone who loves to communicate the laws of the universe and what it means to be human.” He’s worked with astrophysicists at Cornell University who hunt for exoplanets, for instance, and wrote the music for a theatrical dance performance inspired by Washington State University research on glacier dynamics in Greenland. In recent years, his focus has been on building large installations that combine sound and visuals in interesting ways.

A couple of years ago, Woolston created an art installation for the Museum of the Moving Image in New York City with Levi Patel that made use of haptics technology. The tech is called Music: Not Impossible (M:NI), and I wrote about it in 2018. M:NI is designed to provide deaf and hearing users alike with a “vibrotactile” concert experience.

The basic kit includes two battery-powered wristbands, two ankle bands, and a harness that fits across the back and shoulders. It interfaces directly with a venue’s sound system and sends electrical pulses (coordinated with colored LED lights) corresponding to various tracks in the music to the sensors against the skin. Skin is a poor discriminator of frequency. It can only detect between 10 Hz and 1000 Hz, whereas our ears can hear frequencies as high as 20,000 Hz. But skin is quite sensitive to shifts in intensity and amplitude, and that’s what the M:NI system exploits.

For the MMI installation—entitled Re-framed—Woolston and Patel incorporated M:NI haptic suits that could be worn by the entirely deaf audience. “It allowed them to feel music through their bodies. I understand sound, I understand wavelengths and vibrations and how our ears interpret those things,” said Woolston. “The point was to reframe how we understand sound with technology.”

More recently, Woolston has found particular inspiration in the physics of turbulence: strong, sudden movements within air or water, usually marked by eddies and vortices. One of his installations explores color theory via a 3D fluid dynamics visualization of Monet’s Seascape. Another piece also incorporates 3D physics simulations of fluid flows, this time inspired by Vincent van Gogh’s most famous painting, Starry Night.

From a purely aesthetic viewpoint, people have long noted the turbulent nature of Van Gogh’s colorful swirls and eddies. As I’ve written previously, Concord Consortium research associate Natalya St. Clair gave a 2014 TED-Ed talk about how Van Gogh’s technique in Starry Night allowed the painter to represent the movement of light across water or in the twinkling of stars. We see this as a kind of shimmering effect, because the eye is more sensitive to changes in the intensity of light (a property called luminance) than to changes in color.

But there’s also some hard science behind the connection. NASA published an image by the Hubble Space Telescope in 2004 of turbulent eddies of dusty clouds moving around a supergiant star, noting that this “light echo” was reminiscent of Starry Night. Two years later, a group of physicists from Spain, Mexico, and England mathematically analyzed the painting and concluded it shares the same turbulent features as molecular clouds (where literal stars are born)—perhaps reflecting the artist’s turbulent state of mind when he created it.

In the 1940s, a Russian physicist named Andrey Kolmogorov predicted there would be a mathematical connection (now known as Kolmogorov scaling) between how a flow’s speed fluctuates over time and the rate at which it loses energy as friction. That is, some turbulent flows exhibit energy cascades, whereby large eddies transfer some of their energy to smaller eddies. The smaller eddies, in turn, transfer some of their energy to even smaller eddies, and so forth, producing a self-similar pattern at many spatial size scales.

Color Theory continues with a visualization of Monet’s Seascapes. I see nature as art in of itself and to create a new lens that re-composes these forces into a piece embedded in architecture, allows room to understand the power & beauty of the natural world and how we compare.🖤 pic.twitter.com/rEdlB0ttzd

As described in a paper posted to the physics arXiv, the international team of physicists measured how the brightness varied between any two pixels in digital photographs of several Van Gogh paintings. The researchers calculated the probability that two pixels at a given distance would have the same luminance. They found evidence of something remarkably close to Kolmogorov scaling, not just in Starry Night, but also in two other paintings from the same period in Van Gogh’s life: Wheatfield with Crows and Road with Cypress and Star (both painted in 1890).

A 2019 arXiv paper by two graduate students at Australian National University in Canberra built on that earlier work. By picking a square section in the sky portion of a digital image of Starry Night, they were able to build 2D maps in three different color “channels.” Then they calculated the 2D power spectrum. They also found evidence of turbulent scaling in Starry Night. But whereas the earlier team found Kolmogorov scaling—the subsonic turbulent flow underlying the convection currents in stars as well as Earth’s atmosphere—the Australian duo found supersonic turbulence.