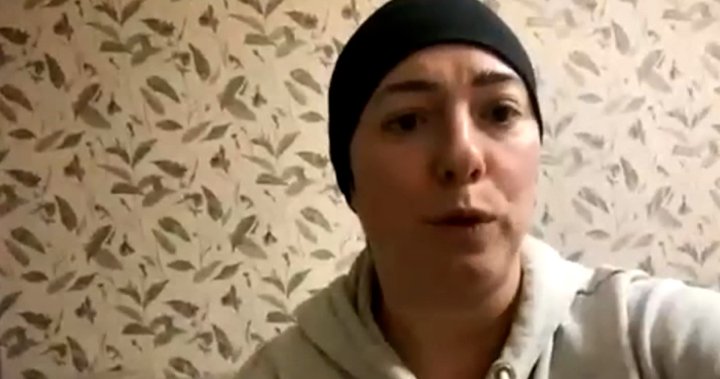 As Russian troops continue to pound on several areas of Ukraine, 43-year-old Olga Fayziyeva has moved to her parents’ apartment in Kyiv after her husband and brother signed up with Ukrainian forces to defend the country.

She said when Russia first invaded Ukraine on Feb. 24, she couldn’t register the sounds she was hearing from outside her building because she was in deep shock.

“The sound of bombing is not unusual…I could identify it through films or movies…but it was unimaginable at first to think it was happening in Kyiv and Ukraine,” said Fayziyeva in an interview with Global News’ Crystal Goomansingh on Saturday.

Kyiv remains a key target, with Ukraine and the West saying that Russian president Vladimir Putin aims to topple the Ukrainian government by force.

Heavy fighting was reported across the capital early Saturday, with explosions and artillery blasts heard in several neighbourhoods and on the outskirts of the city before the sun rose. Central Kyiv appeared quiet on Saturday, though sporadic gunfire could be heard.

2:03
Russian troops closing in Kyiv on day 2 of invasion of Ukraine

“It isn’t a nightmare, it isn’t a dream. It’s our reality,” said Fayziyeva who has been staying home, praying for the safety of her husband and brother, and for the war to end.

Ukraine president Volodymyr Zelenskyy said in a decree issued Thursday that the mobilization will last 90 days.

He has asked the military’s general staff to determine the number of people eligible for service, the number of reservists and the order of call-up.

Fayziyeva said it’s an “awful situation,” but she’s choosing to stay strong for her parents.

2:06
‘Go f— yourself’: Defiant Ukrainians lash out at Russia

‘Go f— yourself’: Defiant Ukrainians lash out at Russia

Even though Fayziyeva isn’t fighting, Fayziyeva said she and her friends are helping by cooking, praying, and helping the men in any way they can.

“We will do our best to help them and to protect our city,” she said.

Fayziyeva and other civilians have been staying home after a curfew in the Ukrainian capital Kyiv got extended in the wake of ongoing Russian encroachment.

The prolonged curfew will run from 5 p.m. until 8 a.m. and remain in effect until Monday, Kyiv Mayor Vitali Klitchsko announced Saturday after a night of airstrikes and intense gun fighting rocked the city.

“All civilians on the street during the curfew will be considered members of the enemy’s sabotage and reconnaissance groups,” Klitschko said on Twitter.

Despite the curfew and ongoing fighting, Fayziyeva said she hopes that some diplomatic solution can take place to help stop the war.

As someone who grew up during Soviet times and as the daughter of a former military colonel of the Soviet army, Fayziyeva said she had friends who died in Donetsk in eastern Ukraine and it was very hard on her.

“I think there’s no political ambition or idea that could be more important than human life,” Fayziyeva said.

— With files from Crystal Goomansingh and Saba Aziz