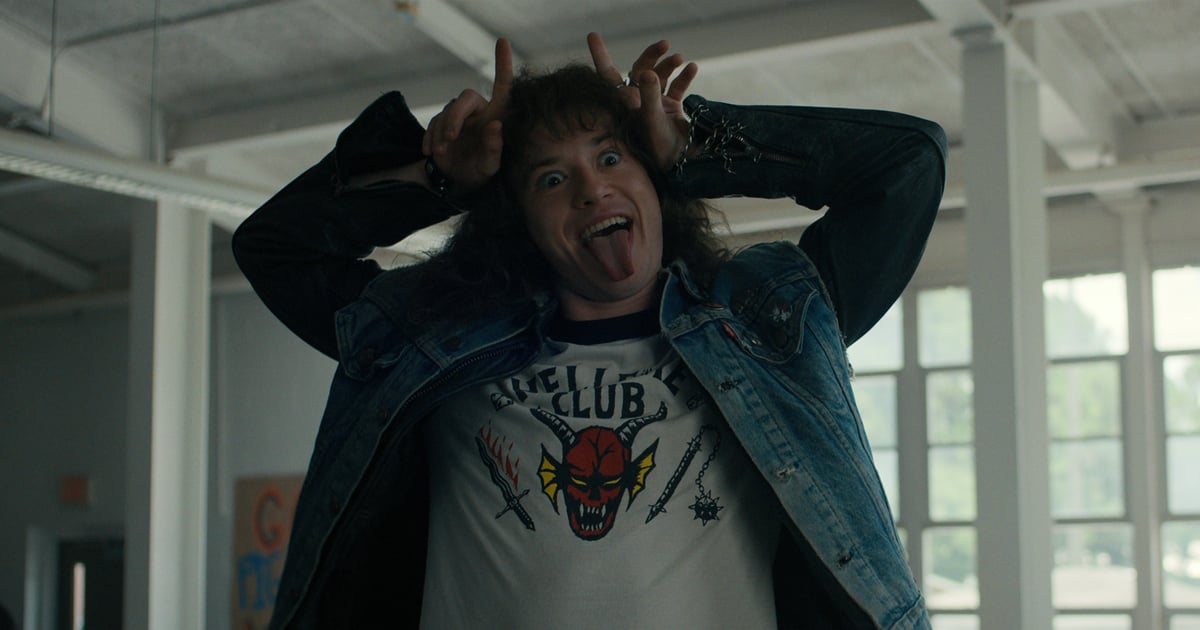 Eddie Munson may have sacrificed himself to save his friends, but he’s still getting a chance to live out his dreams via Joseph Quinn. Just days after Metallica posted a video tribute to “Stranger Things” favorite (and Metallica superfan) Eddie on Instagram, the band invited Quinn to jam with them, gifted the actor with a guitar much like the one his character played on the show, and even projected Eddie’s now famous “Master of Puppets” scene on the stage behind them during the band’s Thursday night performance at Lollapalooza.

For his part, Quinn was ecstatic to officially meet the band whose music he lived and breathed for two years. “It’s all I was listening to for two years,” Quinn said in a video of the meeting shared by Netflix. “I feel very connected to you guys.”

Quinn’s admiration for Metallica is matched only by the band’s adoration of the “Stranger Things” star who has helped bring their music to a whole new generation. After they played “Master of Puppets” together, the band members let the actor know he’s welcome to jam with them anytime. Lead guitarist Kirk Hammett told Quinn, “You’re hired.” Meanwhile, the metal band’s drummer, Lars Ulrich, joked, “We’d like to make an announcement. Metallica is now a five-piece.”

While the rising star might be a little bit too busy to join Metallica on the road, Quinn walked away from his meeting with the band with a special souvenir. Not only did the rock stars gift him with a guitar just like Eddie’s, they signed it for him as well. The band shared a photo of themselves with Quinn and his guitar on Instagram captioned, “We call to order the most metal meeting ever of The Hellfire Club.” Somewhere out there in the Upside Down, Eddie is definitely smiling.

Just like Kate Bush’s “Running Up That Hill,” “Master of Puppets” has received a huge streaming boost post-“Stranger Things,” with streams shooting up by 650% on the Billboard charts, per Variety. On July 8, the band shared a TikTok of themselves playing alongside “Master of Puppets” in the scene it appears in on the show. “Eddie, this is for you!” reads the video’s caption. In a comment on the video, the band criticized longtime fans for gatekeeping the song, writing, “FYI — EVERYONE is welcome in the Metallica Family. Whether you’ve been a fan for 40 hours or 40 years, we all share a bond through music. All of you started at ground zero at one point in time.”

In the “Stranger Things” scene that features “Master of Puppets,” season four new addition Eddie (Quinn) distracts the bat-like creatures that protect Vecna in the Upside Down in order to allow his classmates to get into the otherworldly villain’s home. Eddie plays an incredible guitar solo from “Master of Puppets” that draws all the bats away from Vecna’s lair to himself and Dustin Henderson (Gaten Matarazzo), posted up on top of the Munson trailer home. Then they fight the creepy creatures off using their makeshift weaponry. Unfortunately, the performance is the beginning of the end for Eddie, who sacrifices himself to further distract and draw away the winged creatures.

Metallica said of their inclusion in the big moment, “It’s an incredible honor to be such a big part of Eddie’s journey and to once again be keeping company with all of the other amazing artists featured in the show.” 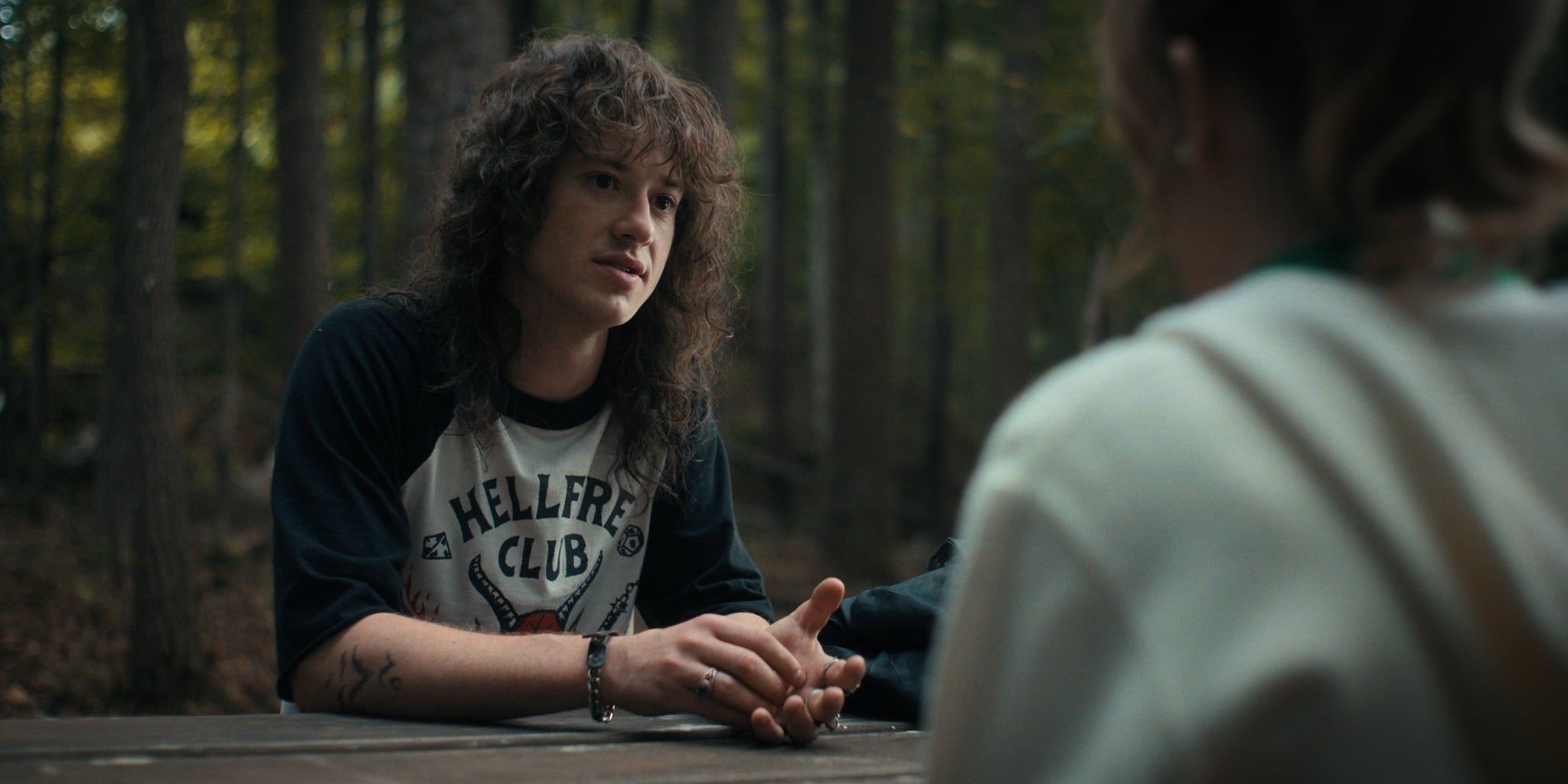 Quinn, 29, was actually playing the guitar during the episode nine scene, he’s since confirmed — which proved to be quite the feat. “I’ve played guitar since I was quite young. So, I had the foundations to take most of it,” he told Entertainment Tonight. Still, he explained further in an interview with Radio Times, tackling the challenge required practicing “manically for months.” “I was trying to be realistic with kind of what I could do,” Quinn told the outlet. “Like I’ve been playing [guitar] since I was a kid but I’m no virtuoso. So I had most of the song down, but for the solo, we had to fly someone, a black belt metal guitarist, in to help with that. The rest of it? I had a stab at it, yeah.”

Quinn added, “It was so thrilling to do on the day – me and Gaten [Matarazzo] were on top of the caravan in the middle of the Upside Down playing Metallica. And it was great fun!”

The Twitter account “stranger writers” pleased Eddie Munson fans everywhere when it shared a video of Quinn practicing for the solo along with the tweet “practice makes perfect.” In the video, Quinn dexterously plays the solo on the custom-made guitar he uses in “Stranger Things,” a collaboration with B.C. Rich called the Warlock. It seems the performance has inspired others to pick up the instrument as well; according to Billboard, the online guitar lesson platform Yousician reported that “Master of Puppets” is now the number one most requested song on the platform.

Watch the video below.

A video of Quinn practicing Metallica’s “Master of Puppets” has fans agreeing that his rock-star turn as Eddie Munson on “Stranger Things” was, indeed, extremely metal. The video, which was shared on the official “Stranger Things” writers’ Twitter on July 10, features Quinn practicing the solo he performed on the show, a performance that would go on to win praise from Metallica themselves. On July 5, the iconic heavy-metal band weighed in on the use of its 1986 hit “Master of Puppets” in an important scene of “Stranger Things” season four, volume two, calling it “so extremely well done.”

“The way The Duffer Brothers have incorporated music into Stranger Things has always been next level, so we were beyond psyched for them to not only include ‘Master of Puppets’ in the show, but to have such a pivotal scene built around it,” the band wrote on Instagram after the final two episodes of season four dropped on July 1. “We were all stoked to see the final result and when we did we were totally blown away . . . it’s so extremely well done, so much so, that some folks were able to guess the song just by seeing a few seconds of Joseph Quinn’s hands in the trailer!! How crazy cool is that?”