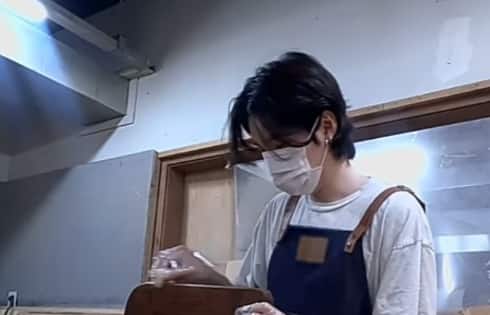 The BTS Vlog series came to an end with the one by SUGA aka Min Yoongi. Taking time off his studio, he headed to a wood carving workshop where he showed off his carpentry skills. It is a known fact that he is very interested in interiors. BTS ARMY will remember the Run BTS episode where he spoke of wainscoting. The rapper, song-writer and music producer has a love for architecture. He has spoken about how he did love to see the work of Spanish architect Antoni Gaudi who is the father of Catalan Modernism. It seems he did up the spaces in the BTS dorm too. The kitchen of the boys had shelves etc made by SUGA. Also Read – BTS: The real story behind Jin’s iconic outfit from In The SOOP will leave you surprised

Min Yoongi made seven cutting boards one for each member. Some of them were shaped like the whale. It is a known fact that every BTS member knows how to cook a little. He made perfect cutting boards as he slogged away in the workshop dressed in a Fear Of God tee. The simple white shirt cost close to Rs 25, 000. Well, BTS SUGA aka Min Yoongi is known for his love for the brand along with Namjoon. ARMY is over the moon. They feel this vlog again reiterated that SUGA aka Min Yoongi is the epitome of the perfect guy for marriage. The Marry Me Yoongi sentiment resurfaced and how. Also Read – This lucky BTS Army’s boyfriend proposed marriage to her in the most epic style and it has a Bangtan Boys connection

how to find a husband like min yoongi, how to marry min yoongi

many will propose again to Min Yoongi after his vlog.He really is the husband material.Stanning bts makes your standard to men ⬆️⬆️

just finished the vlog and all i have to say is: min yoongi is the epitome of husband material and im so in love ??????

This is why Min Yoongi is my bias wrecker, he’s very husband material and know a lot of things. I want to have him. Yoongi marry me ? pic.twitter.com/opdSbOW2yi

BTS members RM, SUGA, Jimin, Jin, J-Hope, Taehyung, Jungkook have wowed people with their vlogs. SUGA aka Min Yoongi revealed that he has made furniture before. It seems his home in Seoul has beautiful interiors. Also Read – Hey BTS Army, did you know what happened when V took his first flight eight years ago? This is relatable AF