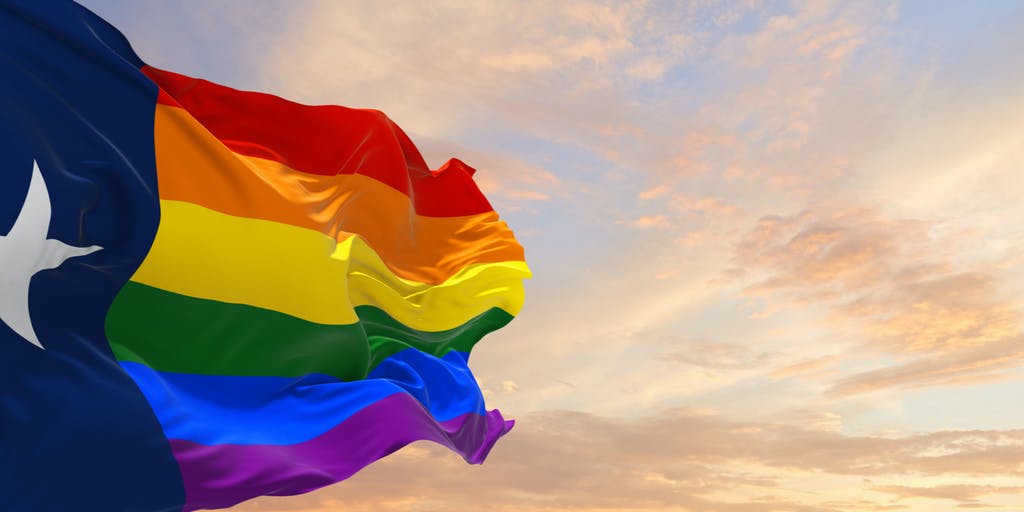 This was the question an 8th grader asked in the middle of the school cafeteria. It was the first time a student asked me this question in such a straightforward way. My mind began to race: Is he daring me to come out? Is this a prank between students? Is he going to tell this information to others?

At that moment, I had a series of flashbacks: The first time happened at a teacher preparation program in Mississippi. I was sitting in a circle with other LGBTQIA+ educators when our managers told us we were not allowed to be open about our identity at the school. The other time was during college. I was a camp counselor in Colorado when staff trainers said it was “inappropriate” for LGBTQIA+ counselors to be our “true selves” around the campers.

For much of my professional career, the message had been clear: don’t come out.

My time as an educator in Texas is no exception. It’s not uncommon to hear news stories about LGBTQIA+ teachers fired for something as simple as having a picture of their partner in their classroom.

So, when a 14-year-old student challenges you to reveal a part of yourself that you are obligated to hide, there’s a level of hesitancy that comes with that. My initial thought was to deflect and suggest this was a conversation for another time. But I remembered how frustrated I felt as a teenager growing up in the midst of Don’t Ask, Don’t Tell, desperately sifting through school, books, and media, hoping to find some glimmer of someone like me.

Moments later, he gave me a quick hug and exclaimed, “Thank you for being honest! I’ve never heard a teacher admit that they were like me!” He then skipped back to his table to finish lunch.

As happy as I was for him, I later found out that in Texas, an existing law purports that being gay is unacceptable, and for sex education teachers, promoting homosexuality goes against the legal code.

Texas is one of four states that have what is colloquially known as a “No Promo Homo” law, an umbrella term for anti-LGBTQ curriculum legislation. In the Texas Health & Safety Code under Section 21.06, there is a provision for sex education teachers and instructional materials that states, “should include emphasis, provided in a factual manner and from a public health perspective, that homosexuality is not a lifestyle acceptable to the general public and that homosexual conduct is a criminal offense.”

For context, No Promo Homo was signed into law in the early 1990s at the height of the AIDS epidemic. The provision was part of a national wave of curriculum laws regarding HIV/AIDS education. Instead of requiring that students learn the knowledge and skills to protect their health, the Texas Health & Safety Code mandates educators teach students that being Queer is not acceptable.

Only 6 percent of sex education programs in Texas public schools use curriculum that addresses sexual orientation or LGBTQIA+ health needs. However, many of these materials often perpetuate unfounded stereotypes and provide little useful information to LGBTQIA+ students. Furthermore, many districts have official or de facto policies that prohibit teachers from talking about sexual orientation in the classroom and reify harmful stereotypes and stigmas. For example, Northside ISD in San Antonio has a policy that says teachers and staff the “issue of homosexuality […] shall not be part of the curriculum and shall be left to the family or clergy.”

Not only is No Promo Homo antiquated, but it is also legally inaccurate. In 2003, Section 21.06 of the code that states “homosexual conduct is a criminal offense” was nullified by the Supreme Court in Lawrence v. Texas. Despite this law being struck down by the Supreme Court, it still exists in Texas legal code.

Furthermore, public opinion and public health perspectives have changed drastically since this law was introduced. The Pew Research Center found that 72% of Americans agree “homosexuality should be accepted by society,” up from just 51% in 2002. Unfortunately, despite numerous legislative attempts over the last ten years, the law persists.

During my years in the classroom, I’ve watched my LGBTQIA+ students navigate similar challenges: inadequate access to restrooms where they feel safe, teachers who allow homophobic and transphobic language in their classrooms to go unchecked, and bullying and harassment from their peers.

What’s most insidious about this law is how far-reaching its impacts are while lurking just below the surface of awareness where most educators don’t know that it even exists. In the words of Elie Wiesel, “to remain silent and indifferent is the greatest sin of all.” So, an important part of my work has been raising awareness and advocating for the elimination of this law.

I’ve led professional development for fellow teachers on this topic, wrote an article in the Texas Tribune, and contacted legislators to advocate for LGBTQIA+ students. Last year, I testified in front of the Texas State Board of Education, advocating for new health education standards inclusive of LGBTQIA+ students; Board Member Marisa Perez-Diaz even introduced my recommendations as an amendment to the standards. While the board voted against any mention of LGBTQIA+ identities and health needs, I remain resolute in my mission to advocate for the needs of my students.

Fortunately, this fight does not end with me. If you look across the Lone Star State, students are fighting against No Promo Homo. At MacArthur High School in Irving, Texas, students staged a walkout after teachers were forced to take down “safe space” stickers for LGBTQIA+ students. In Clyde, Texas, Trevor Wilkinson, a former student at Clyde High School, refused to remove his nail polish after repeatedly being put in in-school suspension. I also think about the Transgender students who have repeatedly testified at the Texas Capitol over the last ten months in opposition to harmful anti-transgender legislation.

Most of all, I remember my student who worked up the courage to ask me if I was gay in the middle of the cafeteria. Students have the right to explore their own identity, and this curiosity shouldn’t be thwarted due to an outdated law. His bravery, along with the vast majority of students in Texas, reminds me that we can win, and this cause will always be worth the fight.