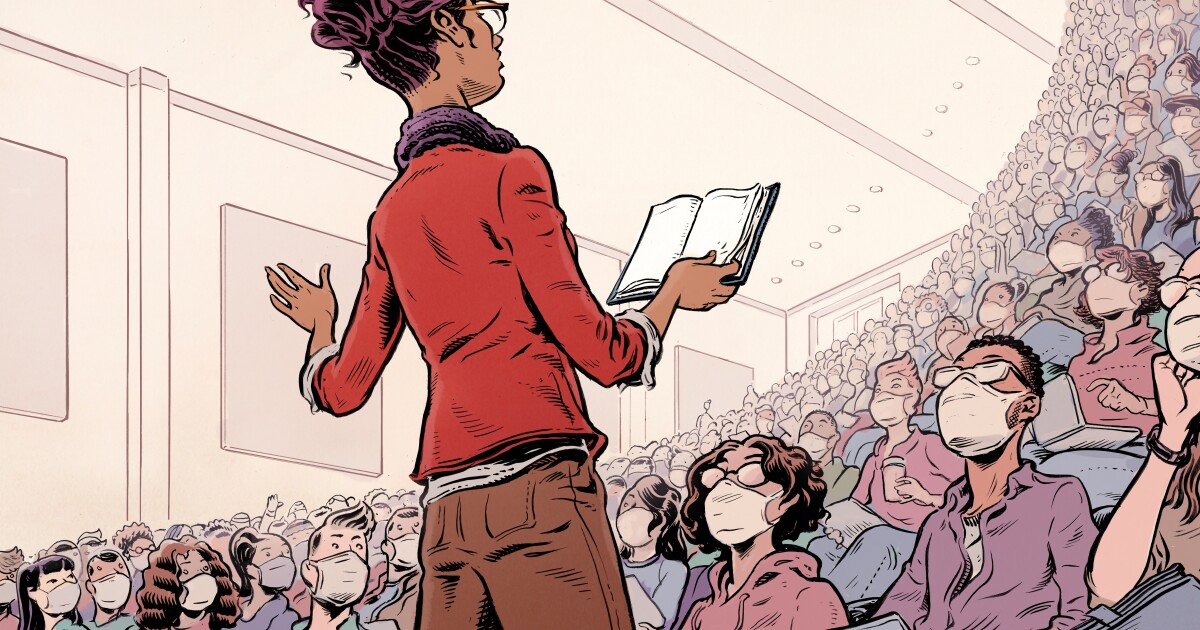 he pandemic has created a huge demand for advice on good, evidence-supported teaching methods. But much of the conversation seems to presume professors are teaching perhaps dozens of students — when some are teaching hundreds.

That’s all been wearing on Jody Greene, associate vice provost for teaching and learning at the University of California at Santa Cruz. “The majority of students in STEM in public institutions in this country are being educated in large classes,” Greene says, “where the idea that you can take the test whenever you feel like it is not a reality. It’s not only unrealistic, it’s actually inhumane to the faculty member who is charged with teaching that class to act like, Well, you would just use ungrading if you were a better person.

“I feel like, as always in higher ed, there are structural issues that are just being missed or glossed over in the current conversation.”

From the vantage point of a university, large-enrollment courses make sense. Lots of students need to take calculus and introductory chemistry; putting hundreds of them in the same room is an efficient way to meet high demand. For departments, large classes are a way to manage resources, making it possible to offer small, specialized upper-division courses.

But big classes have a bad reputation. Students might say they’re passive and impersonal. Professors might say teaching them is a heavy lift — and a thankless task. Anyone who cares about equity would be troubled by the demographic data showing which students tend to succeed in these courses and who gets left behind.

Joe Cuseo, a professor emeritus of psychology at Marymount California University, focused for much of his career on the first-year student experience. He worried enough about the large, lecture-based courses to write a 2007 paper, “The Empirical Case against Large Class Size: Adverse Effects on the Teaching, Learning, and Retention of First-Year Students,” laying out evidence for students’ need to connect and the ineffectiveness of lecturing, among other things.

“It seemed like an ethical issue to me,” Cuseo says. “You herd these most-vulnerable, least-experienced students into the largest classes, taught by the least-experienced teachers, many of whom are TAs, as I was, ill-prepared to do it, and use that as a cash cow” to subsidize upper-division and graduate courses. “It just didn’t seem right. It seemed to devalue undergraduates, particularly lower-division undergraduates, and it seemed to devalue general education.”

It doesn’t have to be this way. And there are certainly cases where it isn’t. Dedicated instructors have worked for years to teach large classes in a way that’s active, engaging, and inclusive. Efforts are underway to improve foundational courses at universities and in disciplines. But the fact remains: Many people are teaching hundreds of students semester in and semester out without much in the way of support.

ew professors have decided that 300 students is the ideal size for their class, says Martha Oakley, associate vice provost for undergraduate education and a professor of chemistry at Indiana University at Bloomington, where she’s taught general and organic chemistry to classes of hundreds. “That’s an institutional choice,” she says. A university that makes that choice, she adds, “has an obligation to provide instructors sufficient support to do so equitably.”

When Greene talks about the challenge of teaching large STEM courses, she’s thinking of people like Alegra Eroy-Reveles. This past fall, Eroy-Reveles, a teaching assistant professor at Santa Cruz, rolled the two sections of introductory chemistry she was teaching into one online course, for a total of 670 students who watched recorded lectures, supplemented with various forms of live support.

“The biggest challenge for me is communication,” Eroy-Reveles says. Six-hundred-seventy students make for a crowded inbox. Eroy-Reveles had help from TAs. Still, between the sheer volume of e-mails and her efforts to craft supportive, encouraging replies, she estimates she spent about seven hours a week that quarter responding to messages.

Eroy-Reveles has focused her career on teaching because she knows higher ed can do better by its students. She recalls being the only Latino or Latina, and sometimes, the only woman, in her chemistry classes when she was in college. During a scholarship interview, she was questioned about her citizenship; she was once introduced as someone who brought the “spice” to class.

Those bad experiences fueled Eroy-Reveles’s determination to champion the students in her online course, to push to get them the support they need — like space to take quizzes in person, because doing so is associated with better performance.

It’s nice to be able to reach a lot of people with her evidence-based focus on supporting students. But it’s hard to have a personal connection with more than a fraction of them. At a previous institution, with a class of about 150, Eroy-Reveles read all of her students’ work herself. She is still in touch with a first-generation, low-income student from that class who didn’t have the highest grades, but whose motivation shone through in an assigned reflection. He recently texted to tell her of his med-school acceptance.

Now, Eroy-Reveles’s teaching assistants might mentor a student in that way. But she doesn’t really get to. “This is the best that we can do with what we have,” she says.

“If someone asks me, Where do I get the best general chemistry or organic chemistry experience?,” Eroy-Reveles says, “I tell them, At the community college.”

lass size, of course, isn’t the only variable in class quality. It matters a lot who’s teaching, and how, and what kind of support that instructor has.

Not every active-learning technique is well-suited to a large course, says Sara Brownell, a biology professor at Arizona State University who both teaches large courses and studies how they’re taught. But some of them are. Polling the class works well with a large group, for instance, and students can easily turn to a neighbor to talk something over in a lecture hall.

Inclusive-teaching practices, too, might require adjustment in a large course. Many professors strive to learn students’ names. An informal poll of those interviewed for this article suggests they can learn about 100 per class. But what matters more than knowing students’ names is using them. It works just fine to use name cards, Brownell says — or to simply read students’ names off of their worksheets while walking around the room.

Cuseo, who compiled the evidence against large classes, agrees that active-learning techniques can make those classes much more effective. In particular, he thinks professors who teach large numbers of students could build in exercises where the students quickly work through a problem on their own, in writing, before discussing their response with a partner.

Cuseo still thinks first-year students need a level of connection with their instructor that’s hard to achieve in a huge class. One way to provide that: Make sure they have some kind of small seminar class in the mix, to give a model for what interacting more closely with a professor can look like, among other benefits.

It might be fine, in other words, for students to have some very large classes. But they shouldn’t have only very large classes, especially not at first. Colleges need to consider that balance, and from the perspective of individual students.

Some professors who teach hundreds of students see meaningful advantages to the format, despite its challenges. “There’s something about the magic that happens when you have a big classroom that’s working well; an outstanding instructor who loves teaching; and students’ getting to interact with a lot of different kinds of students in a classroom space,” says Viji Sathy, associate dean of evaluation and assessment at the University of North Carolina at Chapel Hill, where she also teaches a large statistics course. “This is the place where you really mix it up. People are really forced to engage with people who are really potentially very different from them.”

At some universities, growing numbers of large introductory courses are taught by professors who work, as Sathy has, on a teaching track — distinct from but parallel to the tenure track. Such positions typically offer longer-term contracts, the possibility of promotion, and, eventually, a status more or less like tenure. Professors in these roles might redesign and lead difficult-to-teach courses, provide colleagues with professional development related to teaching, or conduct and publish research on teaching and learning.

There’s certainly a logic to putting professors whose whole professional focus is teaching in front of large numbers of early-career students. But on many campuses, teaching tracks are fairly new, teaching has long played second fiddle to research, and these professors may not receive much official or cultural support for their work.

o one can teach hundreds of students well entirely on their own. That means colleges have to spend some additional money to make this system work well. But when they do, large classes can bring extra benefits to students and instructors alike.

“One of the great opportunities of large-course teaching is that it provides an opportunity to design and teach classes in multigenerational teams,” says Tim McKay, associate dean of undergraduate education and a professor of physics, astronomy, and education at the University of Michigan at Ann Arbor.

A teaching team might mean co-instructors, but it also might mean a lead instructor who is joined by some combination of teaching assistants, undergraduate teaching assistants, and staff. These members of the teaching team fill distinct roles — running discussion sections, perhaps helping with grading. They make possible more student-instructor touch points, during class and outside of it. They can help a lead instructor understand if the material is landing with students. All of this, of course, depends on a college paying and training sufficient numbers of instructional team members.

Professors in STEM are more likely to be white and male than are their students. A teaching team is also an additional opportunity to bring in diversity, demonstrating that people of color and women are scientists, too, and giving students from different backgrounds a greater likelihood of finding someone on the team who looks like them.

And ideally, any students helping to run a course as TAs are learning how to teach, too, from someone who’s really good at it. Then, when they go off and teach intro courses on some other campus, they’ll know how.

Much of the discussion of large classes focuses on the introductory ones, which play a crucial part in students’ trajectories. But students’ educations are broader than their majors, and large courses can offer advantages when it comes to general education.

Ed Prather certainly thinks so. After the financial crisis of 2008, the University of Arizona, where Prather is a professor of astronomy, wanted to experiment with courses that had very large enrollments and that would be conducted in a performing-arts theater. Prather, who studies teaching in STEM, was invited to teach one, and he agreed, regarding it as a course-engineering challenge. He started teaching a general-education astronomy course to classes of about 800 students.

Prather sees his course as a calling. Barely anyone taking it will go on to become an astronomer. For many students, this will be their very last science course. That means Prather is giving them their parting idea of what science is, and why it matters, and how they might relate to it for the rest of their lives as workers, parents, and citizens.

As a STEM-education researcher, Prather has demonstrated that his course helps shape students’ perspectives on science and society, among other outcomes. Science education matters, as the pandemic has made plain, and Prather knows what he’s doing is effective. So, to him, reaching a dozen students at a time is not enough. If your teaching goal is to make a dent in how the public views your field, reaching hundreds of students at once is an advantage.

That’s the thing about large-enrollment classes: Anything that happens in them happens to a lot of students. A really great large course makes a big impact. But colleges should keep in mind that a not-so-great one does, too.