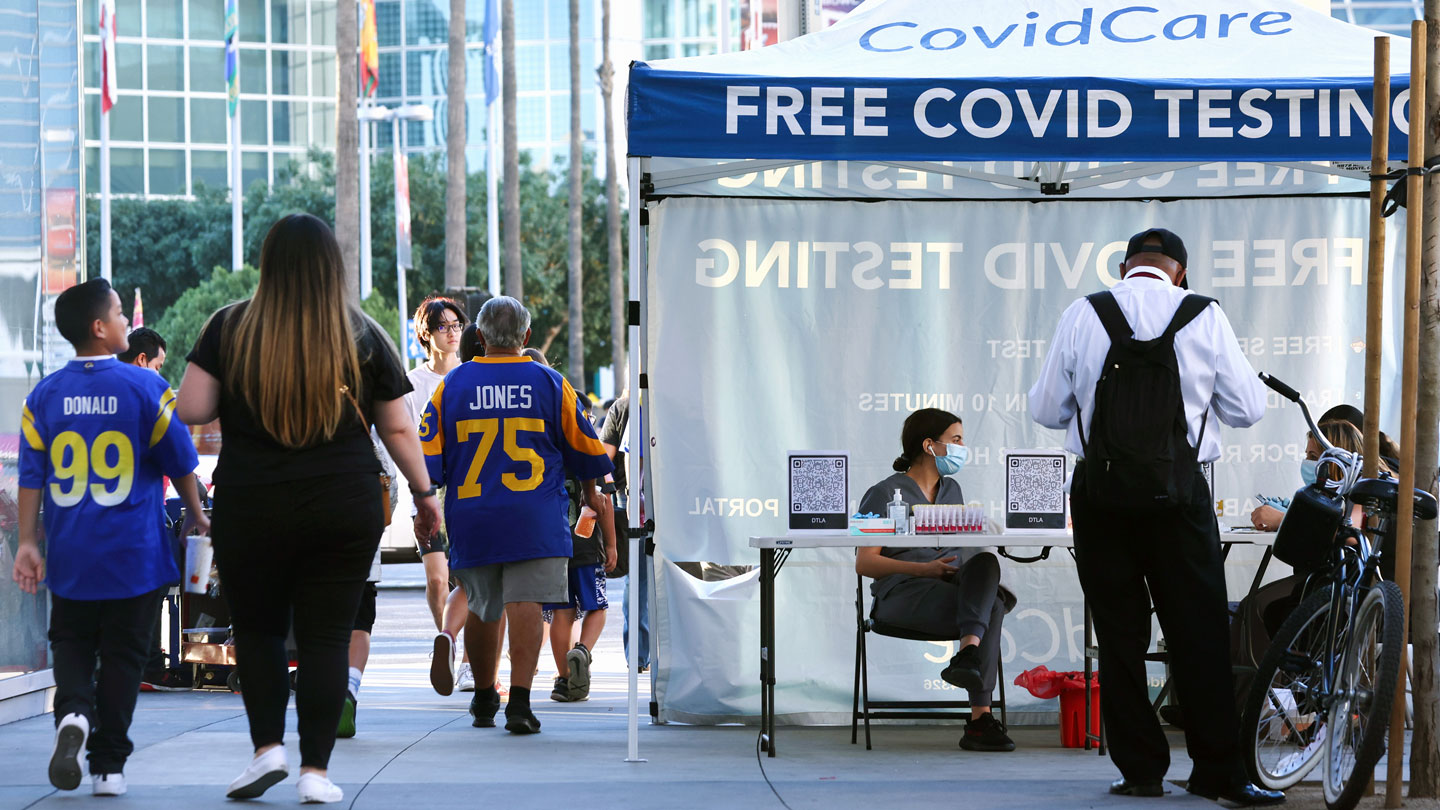 During the winter surge of COVID-19, it felt like the coronavirus was everywhere. Colder weather pushed people inside where the virus can linger in the air, and the surge-dominating omicron variant of SARS-CoV-2, the virus that causes COVID-19, had the troublesome ability to dodge some immune responses (SN: 5/18/21). That meant that both vaccinated or previously infected people were more susceptible to getting infected than they were with previous coronavirus variants. Perhaps that shouldn’t have been a surprise given the vaccines’ primary goal is to prevent severe disease and death (not to prevent infection at all, what’s called sterilizing immunity). Still, omicron caught everyone off guard.

Finally, weeks after COVID-19 cases skyrocketed, they continue to trend downward in most parts of the United States and around the world. Every time cases drop, I find myself holding my breath, hoping that signs of a resurgence won’t appear. So far, so good — for now. I might be able to let that breath out soon, for at least a bit. (Although cases in New Jersey, where I live, appear to be plateauing at levels close to the peak of last summer’s delta wave.)

The bulk of the winter COVID-19 cases were caused a subvariant of omicron dubbed BA.1. Researchers are now keeping an eye on its close sibling, an omicron subvariant called BA.2. Even as cases decrease overall, BA.2 is on the rise, accounting for an estimated 4 percent of new cases in the United States for the week ending February 19.

BA.2 concerns researchers because it is slightly more transmissible than BA.1, which could extend the current surge, and it also has some different mutations than BA.1. Both BA.1 and BA.2 can evade immune responses by dodging virus-attacking antibodies sparked by vaccination or infection with other variants, and some of BA.2’s differences might mean it could evade antibodies made after a BA.1 infection (SN: 12/21/21). So far, that’s not what scientists are seeing. Instead, even though these types of reinfections can happen, they are rare, a team from Europe reports in a preliminary study posted February 22 at medRxiv.org. Reinfections with BA.2, the team found, were most common in young, unvaccinated people who weren’t hospitalized. Time will tell how long this protection holds up and how it might fare against future variants or subvariants.

This isn’t the first time we’ve worried about reinfections. An eon ago in pandemic time, in early 2021, the emergence of the alpha, beta and gamma variants sparked concerns that more people might soon be faced with a second bout of COVID-19. So in February of last year, I interviewed epidemiologist Aubree Gordon of the University of Michigan in Ann Arbor to hear her thoughts on what variants might mean for the pandemic at large (SN: 2/5/21).

Back then, our understanding of reinfections was in its infancy. Studies hinted that the beta and gamma variants could evade parts of the immune system, making reinfections possible. But we didn’t know how common reinfections were or if a second bout of COVID-19 might be less severe than the first. Meanwhile, the vaccine rollout in the United States was inching along, with many people desperately seeking first doses. Last year, Gordon, who has been studying coronavirus reinfections, told me that the new variants might prolong the pandemic. But she was quick to remind me that even in the face of variants, pandemics always end.

Fast-forward to February 2022. Vaccines are more broadly available (although there are still access issues and some people don’t want the shots), and we’re certainly no spring chickens when it comes to face-offs with new variants. But because the pandemic is a time warp, I decided to catch up with Gordon now to see if her thinking has changed since February 2021. Our conversation has been edited for length and clarity.

Garcia de Jesús: What have we learned about reinfection over the past year?

Gordon: One of the things that we’ve learned about reinfection or [vaccine] breakthroughs is that once people have that second exposure — be that their first is vaccination and their second is infection or their first is infection and second is vaccination — people generate “hybrid immunity.” People are generating a broader [immune] response which is going to help protect them against future infections. It’s not going to be sterilizing immunity against all variants that arise, but it’s certainly going to help reduce the probability that people get infected or reinfected with every variant. And when they do get reinfected, they will be more mild infections.

Garcia de Jesús: Last year, you said that we may or may not need booster shots. What are your thoughts now?

Gordon: Our perception of boosters has completely changed. It became evident that boosters would help. They would help to curb transmission. They would help to reduce severity for people who do have breakthrough infections. I think it’s generally felt that there’s a need for an omicron-specific booster because getting vaccinated and boosted with the original strain of the virus is not very effective at preventing infections with omicron.

We need to look toward the future. I think one of the big questions with an omicron-specific booster is going to be what effect will that booster have on somebody who’s already been vaccinated or even vaccinated and boosted previously. Is it just boosting immunity to omicron? Or do you see them develop broader immunity? Through boosting with a different variant, you might generate broader immunity to protect not only against omicron but also briefly protect against any future variants that circulate.

See all our coverage of the coronavirus outbreak

Garcia de Jesús: As states drop mask mandates, there’s talk that we are exiting the pandemic phase of this viral outbreak. Is that true?

Gordon: I think completely letting go of control at this point would be a mistake. We’re not through it, we’re not at the endemic level [when the virus normally circulates at some baseline amount]. But I do think we are in a transition period.

If you look back at flu pandemics, for example, there has been a transition period: The first year or two with a very heavy toll, but then beyond that, [transmission] typically stays higher for a few years. I think at this point, we’re in a stage where most countries — not every single country but in most — a majority of the population has some level of immunity. What the transition period looks like for SARS-CoV-2, the virus that causes COVID-19, really depends on the severity of infections and how many exposures do we need to get down to whatever an endemic level is. Certainly, one exposure seems to have really reduced severity, but maybe that didn’t get it down to the endemic level where you’ve grown up being exposed to this virus your entire life. The length of that transition period and how painful it is, is really going to depend on the severity of reinfections that occur over time.

Garcia de Jesús: What will the endemic phase of the pandemic look like?

Gordon: Endemic is a period where the virus has hit a “normal level.” You’ve got a high level of population immunity, and [the virus] still causes some specific level of severe disease. We don’t know what that looks like yet. We don’t know if, in the endemic phase, the severity of this virus is going to look like a seasonal coronavirus [that causes a cold] or if it’s going to look more like the severity of influenza [which can kill tens of thousands of people on average per year in the United States] or more severe than influenza. We actually need to get to where it’s at an endemic level before we know all of that.

And the other thing is the rates of infection. We know for seasonal coronaviruses that people get reinfected really often — on average probably about every three years but it can happen as soon as six months after, even in people who’ve been exposed to it throughout their entire lives. At the beginning of the pandemic, the entire population was naïve to this new coronavirus. We’ve been building immunity over time, so transmission stays quite high. That’s going to slow down as people build up immunity, but we’ll see. We may have a need for annual boosters or regular boosters. We might be able to come up with a more broadly protective vaccine that lasts for longer — that would be fantastic.

Garcia de Jesús: Do you feel more optimistic or pessimistic than last year?

Gordon: Honestly, I’m about the same. The only thing that made me a bit pessimistic … was in studies we’ve done in Nicaragua. We got a big wave in 2020, about 60 percent of the population in that study got infected. Then we went forward and had another large wave in 2021, probably of gamma and delta. One thing that made me a little more pessimistic about the situation was that the severity of repeat infections was higher than I expected it to be … but I always thought that people needed at least two exposures [to the virus] before we get anywhere near an endemic level. Maybe even more than two, we don’t really know. We’ve got omicron in Nicaragua now, so we have a large population that has had two or three exposures already because a bunch of them are vaccinated now, too. We’ll see what happens during this omicron wave.

Garcia de Jesús: We all really want this to be over. How will we know?

Gordon: I think people are confused about when a pandemic ends. As I said, it’s a transition period. Instead of thinking of it as a dimmer switch — at the top is pandemic and then you slide down to the bottom which is endemic — people want it to be an off-on switch. Like “oh it’s a pandemic, and now it’s over. We’re in an endemic phase.” But unfortunately, we’re not there yet. We are going to slowly slide toward an endemic phase.