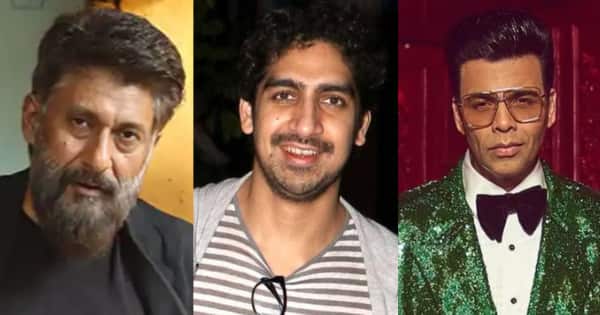 The Kashmir Files has been one of the most successful films of the year. The Vivek Agnihotri film got a tremendous response from the masses. The director has been sharing his views and opinions on upcoming films, celebs and he recently talked about Ranbir Kapoor and Alia Bhatt starrer Brahmastra which is directed by Ayan Mukerji and produced by Karan Johar. Vivek Agnihotri is not the one to mince his words when sharing his honest views. And that’s what he did now. He slammed Ayan and Karan and he also dragged a popular actor. Also Read – Alia Bhatt, Sara Ali Khan and more Bollywood celebs’ AWKWARD and funny candids will make you go ROFL

Brahmastra is one of the biggest trends in Entertainment News. In conversation with Kushal Mehra, reports Zee News, Vivek Agnihotri said that Ayan Mukerji cannot even pronounce Brahmastra. He asked if the team even know the meaning of Brahmastra. As the promotions of Ranbir Kapoor, Alia Bhatt, Mouni Roy and other celebs starrer movie is happening around, Vivek asks that there’s a lot going on about the Astra Verse. He wonders what is that. Though he took a jibe at Ayan’s pronunciation of Brahmastra, Vivek said that he is a wonderful director. He revealed watching Wake Up Sid and Yeh Jawaani Hai Deewani. He wishes that Ayan makes a good film. He expressed his concern saying that he is worried about him as a mother is worried about her children. “I am very disappointed. So these are the problems,” he said. Also Read – Brahmastra: Did Amitabh Bachchan warn Karan Johar that Ranbir Kapoor-Alia Bhatt starrer will be a disaster? [Exclusive]

Vivek Agnihotri also slammed Karan Johar and his inner circle. He talked about how Karan talks about LGBTQ activism but goes on to poke fun at the community in their own films. Karan Johar has been facing backlash from the audience as well. His films have been called for a boycott. While wishing Ayan on his birthday, Karan wrote that given the ongoing scenario of the boycott trend, he cannot predict what Brahmastra‘s future holds. Also Read – Brahmastra: Ranbir Kapoor has become the latest favourite of trolls and these instances are proof

Vivek also slammed Ranveer Singh, whose last release was Jayeshbhai Jordaar. He talked about the film being about female foeticide but saw Ranveer dancing with glamorous girls during the promotions. Vivek said that nobody knew what the film is about and taking a jibe at the promotions he said that it was not a comedy film or a fashion show. He called Ranveer the ‘so called number 1 star’.