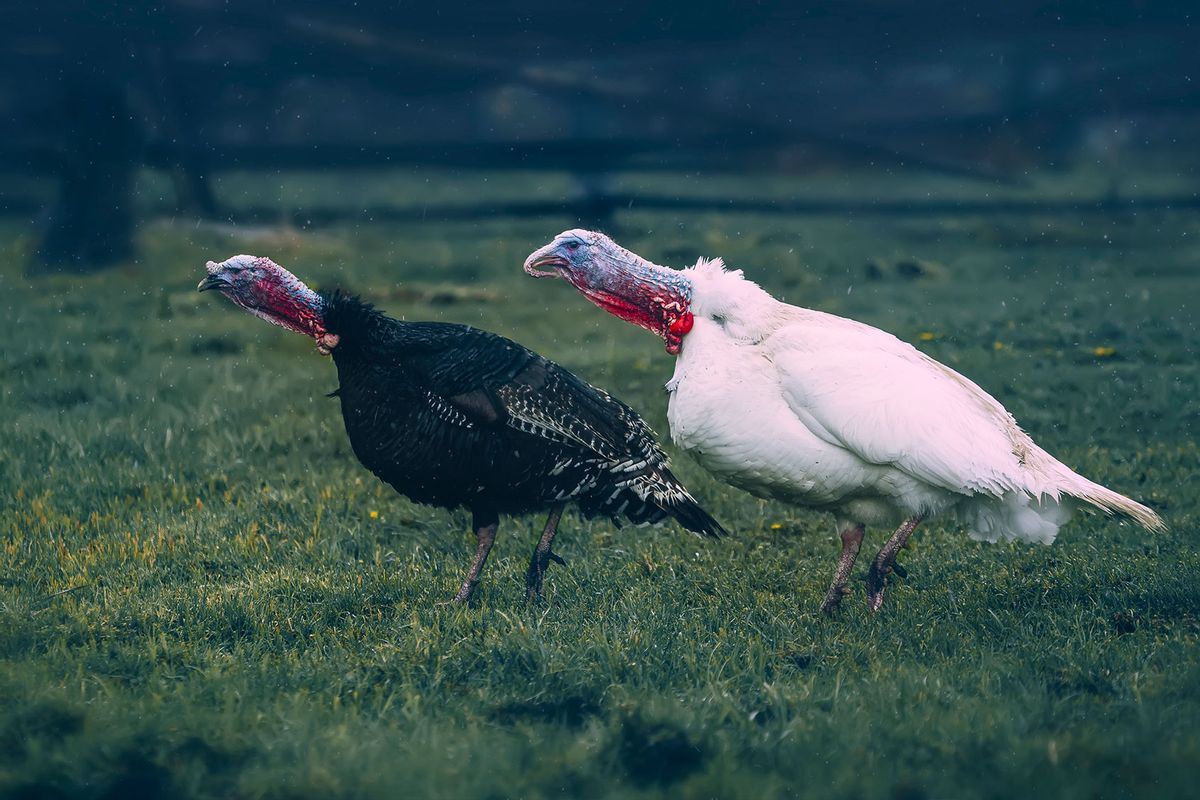 American Thanksgiving and turkeys are forever, inextricably linked together. Turkey may very well have been served at the first Thanksgiving in Plymouth more than 400 years ago, and today the delicious bird is so ubiquitous that consumers fret over turkey prices and whether its meat makes you sleepy. Yet in addition to being a food, turkeys are also birds — intelligent birds, at that.

Indeed, turkeys are so intelligent that just like another intelligent animal (humans), turkeys will form complex social hierarchies. There is even a popular colloquial term for those hierarchies: A pecking order, which is used as a metonym for any social hierarchy, particularly workplace ones. The phrase isn’t just used for turkeys, but for most birds (and especially those renowned for pecking, like chickens).

As the phrase suggests, turkeys establish their pecking order by pecking at each other. The show is a lot more colorful than that, however. As a pair of turkeys fight each other to establish dominance, their wings will flap and reveal their massive wingspans. Their heads and necks will bob up and down, more closely resembling lances drawn and thrust in a medieval battle than silly birds comically bumbling around. The absurd “gobble gobble” that warbles from their throats is menacing because, to those turkeys, they have a lot at stake. Humans compete in business or run for political office against each other. Turkeys, by contrast, establish their pecking order.

“The dominance hierarchy is hugely important in whether [toms] can get close to females and display without being interrupted.”

And just as humans try to assert dominance to pursue sex, so too do their Thanksgiving dinners when they are in the wild. Wild turkeys do not always display the same behaviors as their domesticated counterparts.

“The big impact is on breeding, especially for toms,” Dr. Alan Krakauer, a biologist at the University of California – Davis, told Salon by email. “Here the dominance hierarchy is hugely important in whether they can get close to females and display without being interrupted. Males can sometimes even form teams to help them compete in the hierarchy, but these males still have to fight for position within these teams. These teams are composed of relatives (brothers), but that’s another story.”

That dominance hierarchy scheme only applies to the male turkeys, though. What about the females?

Intriguingly, female turkeys (hens) don’t seem to be as violently obsessed with hierarchies. “Hens have more frequent but less violent interactions and we understand a lot less about what’s at stake for them,” Krakauer explained.

Dr. Chris Elphick, a biologist at the University of Connecticut, elaborated on the other possible reasons why turkeys establish pecking orders.

“There can also be advantages in terms of access to food and other resources – for instance, early studies on pecking orders arose from observations of feeding chickens,” Elphick wrote to Salon.

Yet turkeys are uniquely social even compared with many other birds, as Krakauer noted when he wrote that “turkeys have a pretty intricate social life compared with most. A lot of bird species, including most of our typical songbirds, spread out into individual territories in the breeding season.” While other birds will interact with neighbors, ornithologists usually do not regard those as literal pecking orders. And oddly, some species shift between being hierarchical and non-hierarchical; Krakauer noted the “Golden-crowned Sparrow” in California as one example of a bird with a pecking order in winter flocks, but not otherwise.

Elphick elaborated on the extent to which other birds establish pecking orders.

“They occur in other birds, and were first described in chickens a century ago,” Elphick explained. “They’ve also been found in various other types of birds. For example, ravens have been shown to form hierarchies in foraging group both in the wild and in captivity, and there are studies of hierarchies in zoo penguins. Usually, these hierarchies are found in species that live in groups that are stable over time – as these are situations where the formation of clear relationships between individuals can form.”

“Human societies can have rules for who, if anyone, has preferred status in these cases. For the most part, turkeys don’t have these, with the exception that one-year olds males are almost always lower ranked than older males.”

Indeed, a somewhat serious argument could be made that humans are not entirely dissimilar from turkeys. After all, how often do people engage in seemingly meaningless arguments to assert dominance over each other? How often are those arguments less than meaningless?

“I’m not a sociologist so I don’t necessarily have the best answer for human applications except to say our hierarchies aren’t typically ‘pecking orders’ meaning determined by aggression and combat,” Krakauer told Salon. “Most of us probably belong to groups that are hierarchies and other ones that are more free-for-all or democratic. We live in societies that are so large that we are often interacting with strangers and there are no existing social ties to guide us. Human societies can have rules for who, if anyone, has preferred status in these cases. For the most part, turkeys don’t have these with the exception that one-year olds males are almost always lower ranked than older males.”

Of course, one is more likely to see turkeys fight over pecking order if you encounter them in the wild rather than in a domesticated environment. This means that the chances are you are not going to encounter that experience while purchasing a live bird for your meal. Yet what should a human do if they are lucky enough to stumble across such a battle in the wild?

“If it were me, I would settle in and watch the spectacle!” Elphick told Salon. “I’d certainly discourage people from trying to interfere as it’s a perfectly normal part of the birds’ behavior.  And there’s probably little effect people can have anyway – most likely, the birds will just move elsewhere and return to what they were doing before the interference began.”