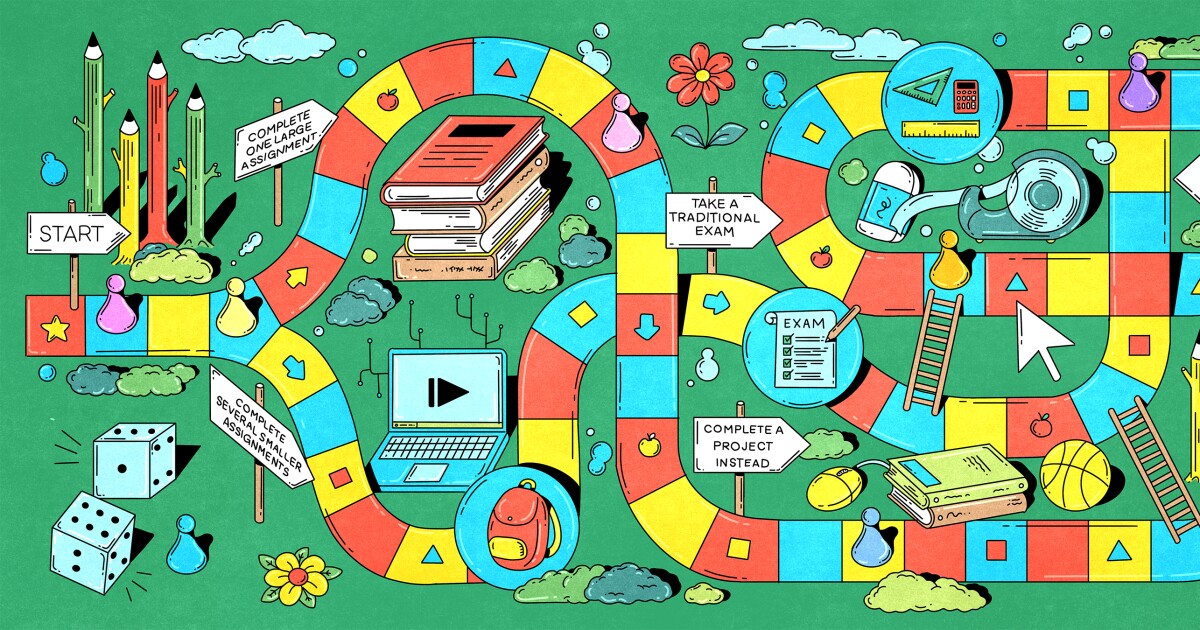 The pandemic forced Gauthier, a professor of media and culture at Randolph College, in Virginia, to adjust to remote instruction. She also had to contend with Randolph’s recent shift from standard semesters to seven-week terms. Those changes made her consider her courses with fresh eyes. She thought hard about what she really hoped her students would achieve, settling on big-picture goals, like “have an epiphany,” “ask a brave question,” and “sit with your own not-knowing.”

To support those goals, she’s made a host of changes. She’s shifted to a form of “specifications grading,” in which students decide which bundle of work to complete in return for a particular grade and are expected to revise their work. She’s made her course materials open access. She’s given more varied assignments, and invited students to connect their final project to an issue they find important.

“We’re living in a completely different time,” Gauthier says. “We can’t go back.”

Nearly all instructors who were teaching in the spring of 2020 had to take their course plans back to the drawing board. With their time-honored class policies, assignments, and assessments no longer possible during emergency online instruction, many found themselves asking new questions: Did this rule lead to the desired results during a pandemic? Had it ever? Was this assignment the only — or even the best — way for students to learn the material? Was this assessment the right way to measure that learning? Did the material seem accessible? Did the professor?

It’s hard to imagine anything that would disrupt teaching more than that initial move online. Still, the 20 months that followed presented a series of new challenges. Zoom teaching made it harder to wall the classroom off from life’s other demands, for students and instructors alike. Some instructors were pushed to offer their courses in multiple formats. Even those who’ve now returned to fully in-person instruction must contend with the pandemic’s lingering effects on attendance, attention spans, motivation, and mental health.

Put it all together and many professors find themselves more inclined to craft policies that account for the nonacademic complications that can sidetrack students’ coursework, and to create assignments that activate students’ motivation. To be sure, not everyone teaching college students is moving in this direction, or agrees with it. Still, these are the kinds of ideas professors will hear if they seek out professional development for their teaching. None of them are new: These approaches are grounded in research on how students learn and have been used before to promote equity and student success. But the pandemic has broadened their appeal.

“The time has come to stop designing courses as if they were for robots,” says Robin DeRosa, director of the Open Learning & Teaching Collaborative at Plymouth State University, in New Hampshire. “And the syllabus kind of treats them like that. Like, Here’s the inputs, I’m gonna type it in and I’m gonna get out the output that I expect. And if I don’t, you fail. And it’s just not how learning works — at all.”

Among the pandemic’s lessons, DeRosa says: “We can’t escape our humanity.” It’s an open question, she adds, whether higher ed will really take that to heart.

Even for the professors who’re inclined to do so, making courses more appealing and more humane requires taking on extra work at a time when everyone’s feeling pretty overextended. But for Gauthier, at least, the results have been freeing. Teaching this way, she’s found, is more fun. Gauthier, who’s been teaching for close to two decades, feels like she can be herself in the classroom now instead of playing the part of a college professor.

ven as more courses moved back to in-person instruction this fall, and some colleges insisted they stay that way, it proved difficult to get everyone in the room. Not everyone was comfortable being there. Students still had to quarantine. The bar for “too sick to come to class” was lowered. Physically going to class was a change for many students, and the strains of the pandemic could sap motivation.

For those very practical reasons, policies on attendance, participation, and deadlines may have been particularly ripe for change.

Count Katie E. Bradford among those who never imagined accepting late work. Bradford, a lecturer in communication studies at the University of Texas at Austin, was a stickler for deadlines because she thought they helped prepare students for their professional lives.

But then Bradford asked Kate Osmond to review her syllabus. Osmond is an instructional designer in the Moody College of Communication, where Bradford’s department is housed, and has helped Bradford adapt her courses during the pandemic.

When Osmond read Bradford’s syllabus, the deadline policy — no late work accepted — stood out. “Luckily, I have a great relationship with Katie that we’ve built over time,” Osmond says, “and so when I came back to her about it, I was like: Hey, I noticed this, and this is one of the more rigid policies I’ve seen. What’s your reasoning behind that, and would you be open to thinking about some flexibility here?”

With Osmond’s encouragement, Bradford is trying something new this semester. She’s offering students a “time bank” from which they can draw one two-day extension on an assignment, or one-day extensions on two separate assignments.

Osmond thinks flexible policies are better, full stop. There are always students with extenuating circumstances, and she thinks building in a clear, consistent way to handle them is more equitable. Still, she says, it’s easier to talk about this with faculty against the backdrop of the pandemic, which has made such challenges more widespread and harder to miss.

Bradford trusted Osmond’s judgment, but she had some questions. Would this policy create a logistical headache for her? Would it send students the right message?

Keeping track of students’ requests hasn’t been as complicated as Bradford had feared: She’s simply writing them down on a piece of notebook paper. And not that many students have asked for extensions, she says.

When students do request more time, Bradford doesn’t ask why. Extensions are now just a policy they can use, or not. “I’m treating them like adults,” she says.

Now that she’s tried it out, Bradford thinks the policy works well. Upon reflection, she says, working professionals don’t hit every deadline, either.

rofessors are experts. For that reason, many professors — and plenty of students — think that teaching a course means calling the shots.

It’s common for professors to set classroom policies with an eye toward shoring up their own authority, especially early in their careers. Offering flexible policies and more autonomy requires professors to give up some control. That’s a risk, especially for faculty members who are women, underrepresented, or working under temporary contracts. For many, it means teaching differently than they were taught.

This is far from a new idea. Students have long been given options when they write papers and a choice of topic when they conduct research or tackle a project. But some professors have realized a payoff from giving students a lot more maneuverability than that.

Take Tai Munro, the director of educational development in the School of Continuing Education at MacEwan University, in Edmonton, Alberta. Munro’s course on sustainability is an elective, so she has to make a case to students that it’s worth an investment of their time. It draws students from every class level, and each brings different abilities and needs to the course.

When the pandemic began, Munro was excited to ask her students to explore its connections to sustainability, which she found fascinating. But she knew not all of them would be up for the emotional intensity of examining a crisis they were living through with scholarly eyes. So she decided to make it optional. And once Munro decided to give students the choice of topic, it seemed only natural to give them options about how they’d complete their assignments, too.

So Munro made two related changes, shifting to specifications grading, which allows students to decide the bundle of work — and associated grade — they want to pursue, and offering students a menu of assignments.

Some coursework is required of everyone. But beyond that, students can pick. They might decide to do one “entree,” or larger project; four smaller “appetizers”; or, say, two “appetizers” and one “soup & salad.”

The shift has been successful, Munro says. Students tell her that “having more control over what they’re learning and how they’re demonstrating their learning helps to reduce their anxiety and makes the assignments more meaningful,” she says. “Which means that I enjoy marking them a lot more, because I can tell that they’ve actually enjoyed doing it.”

yllabi can be dry, dense lists of rules and readings that students never consult, to their professors’ famous frustration. No cell phones. No extensions. No unexcused absences. To students, they can also come off as intimidating — even punitive. But none of that has to be the case.

A year before the pandemic, Matthew Cheney, director of interdisciplinary studies at Plymouth State, wrote about his efforts to craft “cruelty-free” syllabi, taking care that course policies don’t inadvertently punish students for having responsibilities outside of class. (He uses another professor’s example of a student required to turn off her phone who missed an urgent call that her child had been taken to the hospital.)

“Are there places where cell phones should always be turned off,?” Cheney writes. “Sure. Theatres and cinemas, courtrooms maybe. Not my classroom, though. I don’t want to be that cop. I want students to use their judgment, and I want to talk with them about the choices they make and the choices I make, and see where we agree and disagree, and why. Conversation, not decree.”

This approach, Cheney adds, connects to research evidence that anxiety hinders learning. If professors want students to learn, they should try to reduce students’ anxiety, not cause it.

Kirsten Potter is moving in a related direction, and encouraging faculty members at Rockhurst University, where she directs the teaching center, to do the same. Potter, who is also a professor in the department of physical-therapy education, learned about constructing “invitational” or “promising” syllabi during a professional-development event. She brought the idea back to her campus, leading workshops that ask professors to consider their current syllabi from the perspective of a student. They’re then encouraged to lay out course descriptions and sets of questions the course will tackle with an eye toward sparking students’ curiosity.

The pandemic caught professors’ attention, Potter says, but it’s not the only reason they should take this inviting approach. Rockhurst, a Jesuit university in Kansas City, Mo., historically drew many of its students from Catholic high schools. Now that the demographics of the country’s young people have shifted, Rockhurst is enrolling more students who aren’t as familiar with the way college is structured. They might not know what office hours are, Potter says, or what’s supposed to be in a course description. “A lot of it is about transparency,” Potter says, “and making it understandable to the students.”

Potter isn’t asking professors to abandon their policies. The idea, she says, is to be more mindful about how they’re communicated — and whether they lead to the results professors are after.