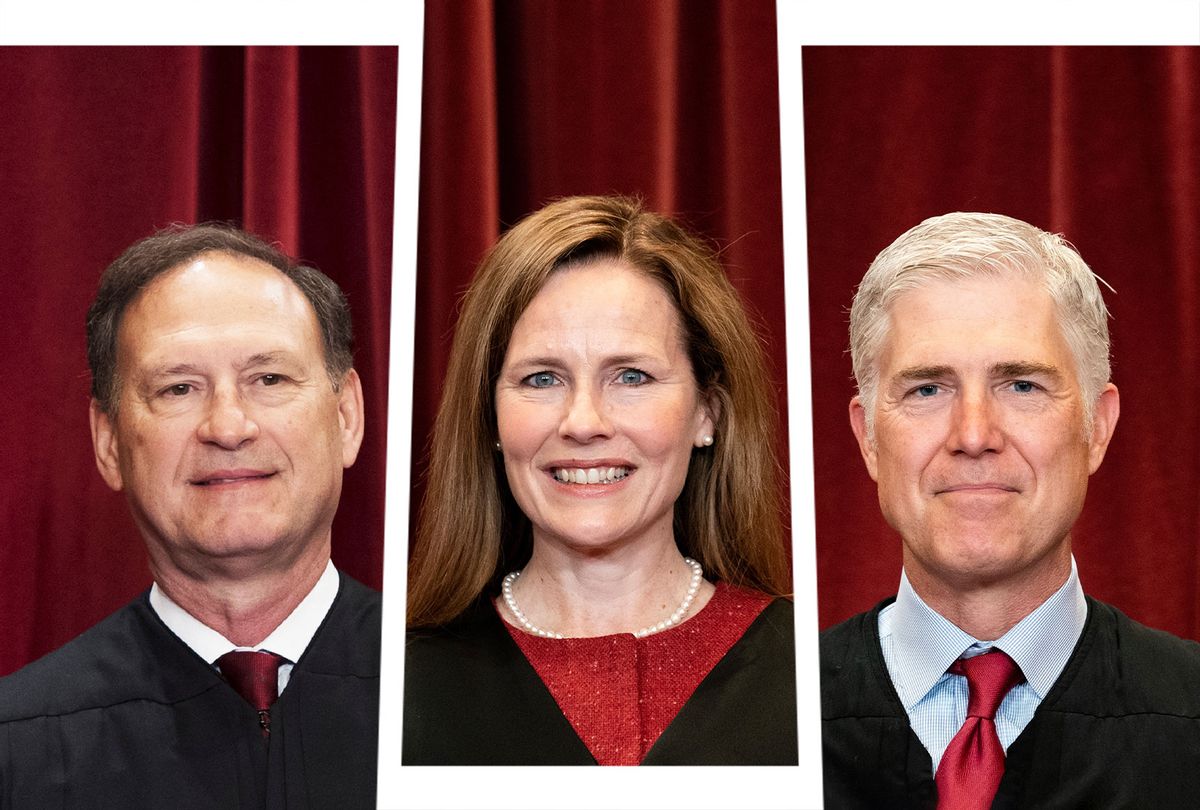 Oh boy, remember the summer of 2021? That’s when we were deluged with spicy hot takes about how the Supreme Court isn’t nearly as bad as liberals feared it would be. Well, here we are half a year away and that supposedly reasonable Supreme Court just proved all of its critics right. They are a bunch of partisan hacks who will ignore the plain letter of the law in order to undermine Democratic governance and install Republicans into power.

Thursday’s decision to strike down President Joe Biden’s COVID-19 vaccine mandate for private employers certainly wasn’t the result of a good faith reading of the law. It wasn’t even an expression of some ideological opposition to the “administrative state,” as Steve Bannon and other authoritarian nuts sneeringly call it. No, the only jurisprudence guiding the Republican-controlled Supreme Court — which has a whopping three appointees by Donald Trump sitting on it — is a belief that the only legitimate presidents are Republicans. We know this not just because of the bad faith of the decision itself, but also by contrasting it with the warm-and-fuzzy feelings that the justices have towards expansive presidential powers when Republicans are in charge.

First of all, the decision itself is a joke. As legal expert Mark Joseph Stern at Slate wrote, the court’s “unsigned majority opinion rests on several dubious claims” and, crucially, “is utterly untethered to the plain text of the law.” The anti-mandate argument held that because COVID-19 is a general threat to public health, it cannot be considered a discrete workplace safety issue. But, as many folks pointed out, the conservative justices don’t believe their own reasoning here, as evidenced by the fact that the Supreme Court building’s pandemic precautions are justified as a workplace safety issue.

I’m not the first to have noted this bit of dissonance, but perhaps worth reiterating. pic.twitter.com/qJulFwas4G

Want more Amanda Marcotte on politics? Subscribe to her newsletter Standing Room Only.

The hackish nature of this decision — which is so bad that none of the six conservative justices who voted for it was willing to sign it — cannot be overstated.

The Republican majority’s ruling is not consistent with the explicit text, structure, or purpose of the statute. It is simply overriding the will of Congress and the duly elected president because it doesn’t like the policy chosen. That’s it. pic.twitter.com/ex8CG4TfpO

This is about one thing and one thing only: Republicans believe prolonging the COVID-19 pandemic helps them politically. They are willing to sacrifice hundreds of thousands of lives — mostly the lives of their own voters — to serve this strategy. The Republicans who control the Supreme Court are, feeble protestations aside, partisan hacks who shape their decisions based on what will help Republicans gain power.

To that end, the motives of the conservative justices are no different than the QAnon shaman and the other jackasses who stormed the Capitol last year in an attempt to overturn the election. They all flat-out reject that right of duly elected Democrats to govern. The justices may hide this anti-democratic sentiment behind faux-legalese and the enrobed pretenses of the Supreme Court, while the QAnoners hide it behind lurid talk of cannibalistic pedophiles and stolen elections. Underneath it all, however, is the same idea: Only Republicans have a legitimate claim to power.

RELATED: Are women people? Why the Supreme Court just signed off on a Texas law that denies women’s humanity

As Osita Nwanevu wrote in the New York Times earlier this month, Republicans view the Constitution “as an eternal compact that keeps power in their rightful hands” and don’t care much about the actual text of it that says differently. It’s why they are fighting to keep actual history out of schools and peddle fake histories that recast the U.S. as a theocratic Christian state instead of a secular democracy. It’s why Trump’s descriptions of voters of color as “frauds” make so much sense to them — not because they think those voters are actually casting illegal votes, but because they don’t view the right to vote for nonwhites as legitimate to begin with.

Want more Amanda Marcotte on politics? Subscribe to her newsletter Standing Room Only.

And to disagree a bit with Salon’s Heather “Digby” Parton, this ruling isn’t even about anything as lofty as ideological opposition to the “administrative state.” Somehow the Supreme Court had no real problem with Trump’s actual overreach when it came to his use of executive power. They repeatedly bent over backward to protect Trump’s decisions that violated the Constitution or the limits put on his power, even as they are eager to strike down Biden’s mundane use of power that sticks closely to the letter of the law. Mark Joseph Stern pointed this out on Twitter:

The court either blessed or at least declined to curtail a large number of Trump’s actual overreaches of executive power. In violation of the First Amendment’s freedom of religion clause, the court upheld Trump’s travel ban that was quite clearly designed to block Muslims from entering the country. Not only did they uphold Trump’s “remain in Mexico” policy that runs counter to international law regarding the rights of political refugees, they, with typically sloppy reasoning, forced the Biden administration to keep following Trump’s rules. They approved Trump’s clearly illegal reappropriation of defense spending money to start construction on his border wall.

Even in cases where they knew there was no way they could legally justify Trump’s abuse of executive power, they backed him anyway by slow-walking cases asking them to overrule his illegal actions. For instance, Trump’s “gag rule” barring clinics that receive federal funds from even mentioning abortion to patients clearly violated the First Amendment. But rather than throwing it out, the court dragged their feet on issuing any ruling, forcing clinics like Planned Parenthood to drastically reduce services until Biden came in and ended the policy.

Nor is this naked partisanship just about Trump. As CNN legal contributor Steve Vladeck pointed out, Republicans were more than fine with George W. Bush’s power grab when it came to his desire to avoid constitutional limits on his presidential right to wage war.

Can’t wait to hear someone explain why the “major questions” doctrine (under which Congress isn’t allowed to delegate “really important” regulatory decisions to the executive branch) doesn’t apply to the #AUMF (which lets the President decide who we are at war against): pic.twitter.com/63LDprsRPZ

There’s no detectable consistency in jurisprudence or legal ideology in any of this. It’s all just about one apparent belief guiding the court’s decisions: Only Republicans are legitimate leaders.

This partisan agenda is why the Supreme Court has also thrown out perfectly good laws like the Voting Rights Act or transparency legislation regarding campaign finance. Bush v. Gore, for that matter, showed this partisan hackery pre-dates even the appointment of the current slate of Republican hacks on the highest bench in the country. It all circles back to this idea that the rights and will of the voters are illegitimate — if those voters choose Democrats instead of Republicans as their leaders. Don’t let the fancy robes fool you. When it comes to their views on law and power, the Republicans who control the Supreme Court might as well pop on some antlers and face paint while they run through the halls of the Capitol building screaming nonsense about “Stop the steal!”