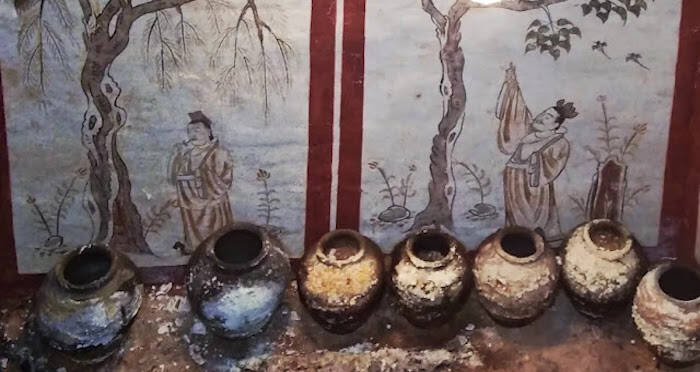 Pot Filled With Cannabis Found Inside The 1,300-Year-Old Tomb Of A Chinese Warrior

The History BlogThe tomb had sat undisturbed for 1,300 years and its uniquely dry conditions preserved everything inside, from the coffin to the wall murals — to the pot filled with cannabis.

Some 1,300 years ago, a great Chinese warrior named Guo Xing was laid to rest inside an ornate tomb in what’s now the city of Taiyuan. He’d completed a long, storied career as a cavalry captain fighting alongside Tang dynasty emperor Li Shimin on the Korean peninsula, and his elaborate burial reflected his high status. The tomb’s walls were adorned with vivid murals and he was given jars filled with various foods so that he might feast in the afterlife. But the one jar placed right atop his coffin was just found to contain something that researchers were not expecting: cannabis.

Though cannabis was widely consumed for its nutritional properties in ancient China, these seeds retained their husks, which are foul-tasting yet high in THC — suggesting that this particular cannabis was used for its psychoactive properties. As the researchers wrote, “We can start to piece together an image of funerary rites that included flames, rhythmic music and hallucinogen smoke, all intended to guide people into an altered state of mind.”

Learn the full story behind this shocking find here.

Sean Gallup/Getty ImagesA symbolic tombstone at the former Bergen-Belsen concentration camp in Lohheide, Germany, where Anne Frank and her sister died of typhus in 1945.

Anne Frank was 10 years old when the Nazis invaded Holland. The precocious young Jewish girl spent two years in hiding before they discovered the secret Amsterdam attic in 1944. Ever since her journal The Diary of a Young Girl was published in 1947, historians have wondered: Who betrayed Anne Frank?

Kevin WilsonAn artist’s depiction of how the straws may have been used.

In 1897, archeologist Nikolai Veselovsky came across an elaborate Bronze Age tomb in southern Russia. Among the various riches, he found eight silver and gold tubes adorned with tiny bulls. But though Veselovsky labeled them as scepters, they might actually be straws.

That’s the theory put forward in a new study in the journal Antiquity: that the tubes found in the Maikop kurgan burial mound were used by Bronze Age elites to drink ceremonial beer.