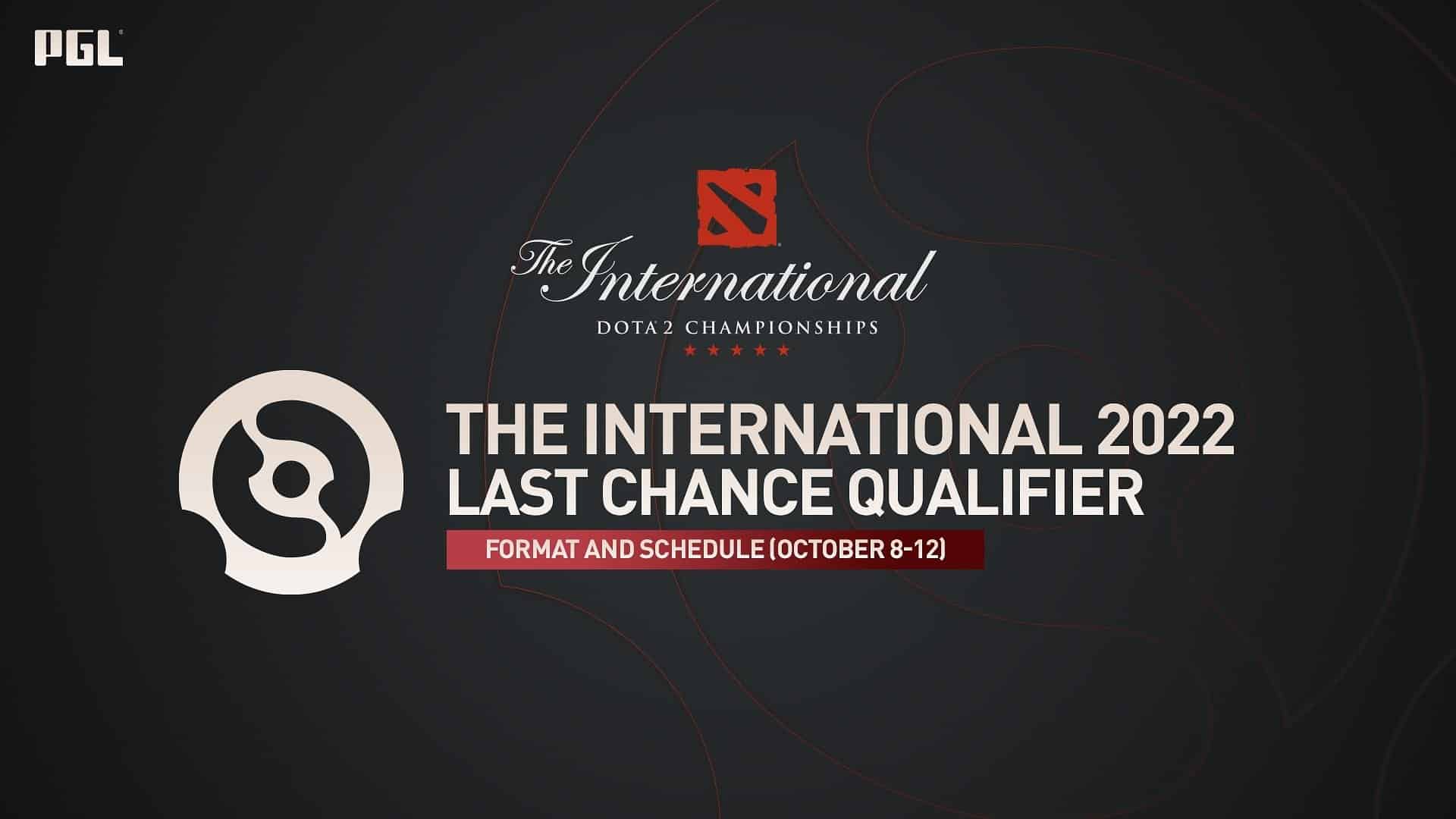 After more jubilation and more heartbreak, a fourth day of matches has ended in the Last Chance Qualifiers for the 11th edition of The International. At this point, there are no stragglers left, and none of the four remaining teams are a surprise presence. However, four others were eliminated on the day, and we’re bringing you the results as well as summaries of the best matches.

If you’re only just catching up on the LCQ Playoffs, we suggest taking a look at the first day of matches.

In the Upper Bracket, Team Secret were dominant in disposing of T1, while Virtus.pro reverse-swept Team Liquid in what was an epic series. Down below, Natus Vincere’s hopes were dashed by Xtreme Gaming, while Vici Gaming outclassed Wildcard Gaming. In the next two series, Team Liquid made Xtreme Gaming look like amateurs, while many SEA hearts were broken as T1 succumbed to the sheer might of VG.

After last year’s endless trash talk battles between Team Secret and OG (albeit without Anathan “ana” Pham involved), there was plenty of bad blood between fans of the European giants and the two ex-OG players who are currently standing in for T1. This game was the most hyped fixture of the LCQ, but sadly, it ended up being rather one-sided.

T1 has been known to opt for bizarre drafts, especially for their Mid lane, and picking Oracle for the job clearly wasn’t the answer. The out-of-meta support Hero was joined by Tidehunter, Primal Beast, Morphling and Tusk. In response, Secret went meta-heavy with Chen, Lycan, and Leshrac providing ridiculous amounts of tower damage and Ursa and Nyx rounded things up with damage and disables.

It didn’t take long for Secret to exploit the ridiculous nature of their opponents’ draft, and they owned the game throughout and finished things off without any trouble with a 21k gold lead at 27 minutes.

Having learned their lesson, T1 went with Tiny, Night Stalker, Faceless Void, Clockwork and Venomancer in the second game. By comparison, Secret’s Enchantress, Earth Spirit, Morphling, Beastmaster and Primal Beast didn’t look like they had as much synergy.

Despite a strong start, the kill count was pretty even for most of the game, and T1 never really seemed to be in control of either the map or the game. Their itemization wasn’t what it needed to be to pick off Secret’s Heroes quickly, and when the WEU team finally won a big teamfight in the 28th minute, the writing was on the wall. The game ended shortly after that.

Virtus.pro have a long history of choking in the dying stages of tournaments, and their embattled lineup had plenty to prove ahead of this clash. Team Liquid, on the other hand, looked very strong coming into the Playoffs, and it would be borderline criminal for them to crumble at such a point in time.

With the likes of Morphling, Invoker, Timbersaw, Primal Beast and Disruptor, one would have fancied VP’s insane teamfight. However, with Shadow Fiend, Faceless Void, Witch Doctor, Visage and Clockwork, Liquid’s lineup was no pushover.

This game went back and forth for the better part of 30+ minutes before either team was able to get a significant advantage. When VP finally did, they piled up the pressure for quite a while, chipping away at Liquid’s buildings and increasing the gold lead. However, after a lengthy spell of defending, Liquid came back with a few brilliant teamfights to bring the game back. After a prolonged period of attempted Rat Dota and intense moments of uncertainty, Liquid closed the game in the 58th minute with a brilliant Chronosphere from Lasse “MATUMBAMAN” Urpalainen.

Game 2 saw a somewhat unconventional draft from the Western European side, who picked Shadow Demon, Leshrac, Pudge, Tiny and Lone Druid. In response, VP went with Nature’s and Death Prophets, Primal Beast, Ember Spirit and Disruptor. It was going to be a battle between kiting and snowballing.

This time around, VP went off to a good start, with Liquid struggling to keep up with the sheer speed of the CIS team’s lineup. However, there wasn’t much of a kill difference, and soon the Lone Druid began outscaling its counterparts. At one point, it seemed as though they would be able to take the series 2-0, but a few good fights from VP brought the game back into their favor, and they finished things off in the 45th minute.

For the last game, Liquid’s picks certainly seemed to have a convincing edge over VP’s, with Faceless Void, Witch Doctor, and Snapfire providing incredible teamfight while Axe and Tiny combinedly posed an ever-present threat of pickoffs. VP had two squishy cores in Luna and SF, with a Visage and Clockwork providing sustenance and a Disruptor for support.

Despite a relatively balanced laning stage, VP were quick to get an advantage with their fast-farming cores. This lead kept ballooning, and more and more of the map went their way. Once they started going uphill shortly after the 30-minute mark, it was over in a matter of minutes.

After being knocked down to the Lower Bracket, T1’s hopes were hanging by a thread. VG, who had crawled through from the first very round of LB matches to meet them there, had more game time on their hands, and it was perhaps this that ended up making the difference.

This was an absolute bloodbath, with T1’s Nature’s Prophet, Disruptor, Primal Beast, Venomancer and Slark combo clashing hard with VG’s Chaos Knight, Puck, Mars, Snapfire and Undying. Kills came hard and fast and neither team was able to attain a decisive edge.

This all changed after a few teamfights post 20 minutes, as T1, despite only having one disabler, fought brilliantly to gain an unassailable advantage, forcing VG to call GG in the 31st minute.

With Primal Beast, Earthshaker, Witch Doctor, Lycanthrope and Morphling, the Chinese team had a fantastic all-round draft to work with, while T1’s Lone Druid and NP were somewhat useless without plenty of space and time to build up. The latter also had a Clockwork, Tiny and Disruptor alongside the aforementioned duo.

This time around, VG were taking no prisoners. They had the draft advantage and they knew it. Less than 20 minutes in, they had a sizable advantage, and this grew in size over time. However, T1 had a great teamfight followed by a bit of a comeback about 34 minutes in. From that moment on, things went back and forth in an intense battle of wits, with no clear difference between the power levels of the teams. In fact, even when VG finished the game at 56 minutes, they had a gold lead of less than a thousand.

The final game of this exciting series saw T1 opt for a Faceless Void again, this team in combination with Puck, Venomancer, Shadow Shaman and Undying. The lineup seemed great on paper, but VG’s Morphling, Void Spirit, Visage, Tusk and Rubick were equal to the task and then some.

Both teams took chunks out of the other, but once VG killed Roshan and took the Aegis, they also began taking control of the map, and when they went high ground a few minutes later, there was precious little T1 could do. The fan favorite team tried to hold on for a little while more, but it was to no avail.

Join us once again tomorrow as we recap the last day of LCQ matches.