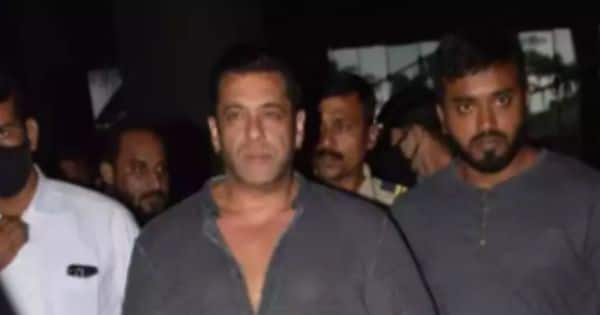 Bollywood Bhaijaan Salman Khan is back home after his lavish vacation in Dubai. The actor was recently spotted at the Mumbai airport on Saturday morning and was accompanied by his bodyguard Shera and police officials. Security seems to have beefed up for Salman after he started receiving death threats. Salman donned a casual grey shirt paired with ripped black denim and looked handsome as ever. Pictures and videos of Salman from Dubai went viral on social media. Also Read – From Katrina Kaif to Anushka Sharma: 5 Bollywood actresses who gave a tight slap to their costars for real

A few days ago, the Mumbai police granted a firearm license to Salman after the actor had applied for a weapon license for self-protection. For the uninitiated, after Punjabi singer Sidhu Moose Wala was shot dead, Salman and his father Salim Khan received a threat letter. If reports are to be believed, the letter stated how Salman and his father would meet the same fate as Sidhu. approached the Mumbai Police and was granted security. The Lawrence Bishnoi gang has been reportedly involved in sending death threats to the family. Salman Khan’s death threat was on the entertainment news and left fans shocked. Also Read – Friendship Day 2022: Kangana Ranaut-Karan Johar, Salman Khan-Vivek Oberoi and more Bollywood celebs who will never be friends

Post Salman’s vacation in Dubai he will be resuming shooting for his upcoming film Bhaijaan which will be directed by Farhan Samji. The film will star Pooja Hegde in the lead role alongside Saknan Khan along with Bigg Boss 13 fame Shehnaaz Gill and Palak Tiwari. Apart from this, Salman has Tiger 3 co-starring Katrina Kaif in the lead role. Salman recent shoot with Chiranjeevi for The Godfather. The pictures from the sets of the show went viral on the social media. Also Read – Kajol to Sara Ali Khan and more Bollywood stars who hate to spend money