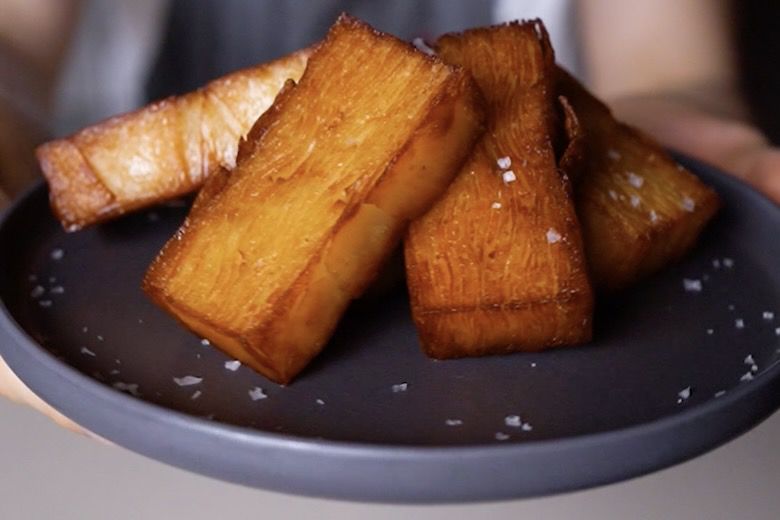 I have a confession: I want to marry a potato. That’s right: a root vegetable that’s bronzed like a Ken doll will be my spouse. For those who know me, this won’t come as a surprise, since, for my entire life, I’ve been drawn to taters of every shape, size, and form. But there’s a new spud in town that I’ve got eyes for—TikTok’s 15-hour potato.

TikTok user Poppy O’Toole, who goes by the username of @poppycooks, posted a video of what she calls the “15-hour potato” that has since gone totally and completely viral. We don’t use the word viral lightly, either; since the TikTok was posted on August 1st, 2021, Poppy’s video has gained 18.2 million views, nearly three million likes, 12,000 comments, and 116,000 shares. At first glance, it’s hard to tell exactly what it is, but it certainly doesn’t resemble a potato. In fact, it more closely resembles a flaky pastry dusted in powdered sugar (one user said it looked like baklava). But in fact, each paper-thin layer that you see is a thin slice of potato. If these look familiar to you, you’re not alone—they’re remarkably similar to the famous confit potatoes from The Quality Chop House in London.

Of course, we had to try it ourselves so we turned to Jun, a Malaysian engineer turned cook and food writer, who tested Poppy’s method.

How to Make the TikTok 15-Hour Potato

Start by peeling and thinly slicing eight potatoes on a mandoline. Poppy tossed her potatoes in beef drippings and flaky sea salt, but Jun went for duck fat (he also recommends clarified butter). Next, the real magic happens. Line a regular loaf pan with parchment paper and more fat (beef drippings, duck fat, or butter all work) and create overlapping layers of the tissue paper-thin slices of potatoes until a hefty stack forms. Cover the “potato loaf” with more parchment paper and bake it in the oven at 250℉ for three hours. Pull it out of the oven, stack three cans (or another solid object) on top of the potatoes to compress them, and chill in the refrigerator for 10 to 12 hours.

Once it’s thoroughly weighed down, remove the loaf from the pan onto a cutting board and cut one-inch wide slices of the potato loaf. And then, deep fry each one in 375℉ oil until they’re completely crispy and gorgeously golden brown. Sprinkle with more flaky salt and cut into them for that irresistible crunchy ASMR.

“Even though the whole thing took many hours to make, I’d give it a 10 out of 10 and would make again,” said Jun.

Since the original video was posted, TikTok users have been trying to perfect the art of the 15-hour potato, including offering flavorful variations made with garlic confit, and another from TikTok user @teawithmrt, who made his with red and green chiles, minced garlic, and dried thyme. With a potato that good, there’s no question that wedding bells are in my future.

Have you tried making the 15-hour potato? Let us know in the comments below!