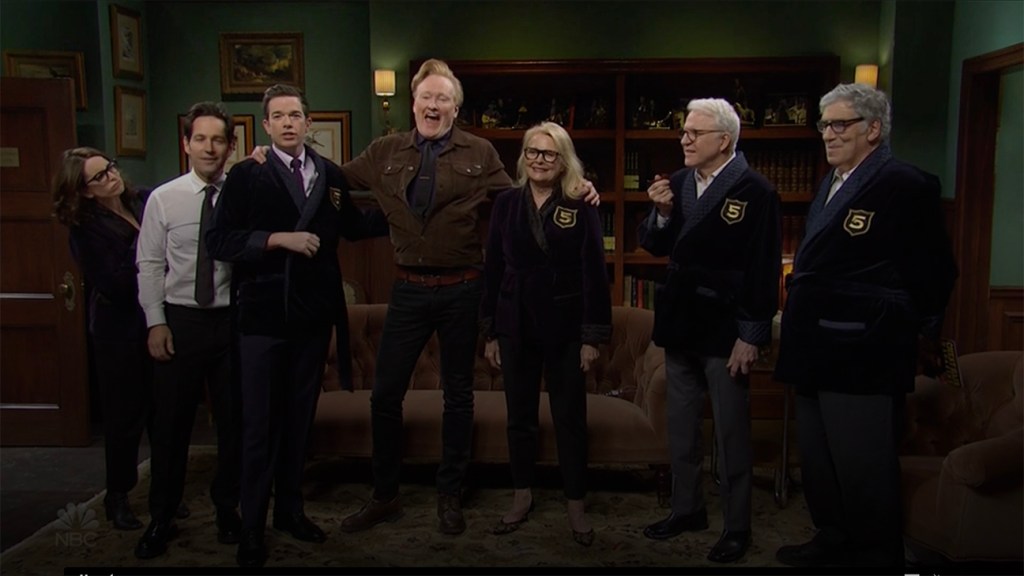 “Not to be a total bitch, but my Five-Timers show in December was supposed to be a lot better. That is before the whole cast decided to call in sick,” Rudd said, referring to his year-end episode that was interrupted by the surge in omicron cases and ended up only having a few castmembers in attendance.

“They all had COVID,” Bergen told Rudd, to which Martin joked, “So what? I have COVID right now. I got it from the Queen.”

When Mulaney enters, Martin greets him with “Ah, Megan Mullally, as I live in breathe.” Bergen congratulates him on his induction, before asking who he is.

“Well, Candice, you wouldn’t know me, but if you have a niece or a son who’s bad at sports, they might,” Mulaney responds.

Rudd continued by explaining that though the night is Mulaney’s induction, it’s also partially a night for Rudd to celebrate. “My party was canceled due to laziness, he said. When Mulaney directs him off the set, Fey enters and is handed a special cocktail.

“I have to say, I had no idea people got treated this well,” Mulaney told Fey. “When I worked here, I was just a writer,” to which she responded, “You were one of the best. You wrote that character with Bill Hader and 800 other things that aged terribly.”

Bergen went on to tell Mulaney that the Five-Timers Club has gotten so big, someone has to retire from it before he can be inducted.

“Too bad nobody here is at retirement age,” Martin said. “You are 76,” Mulaney told him. “Yeah, but I have the child of a 38-year-old, and we can’t get rid of Tina. She was the first woman to ever wear glasses on TV,” Martin responded. “That’s true, Entertainment Weekly called it ‘disgusting,’” Fey said. “And it can’t be Candice. She was back here in the 70s, can you imagine the sexual harassment that happened back then?”

Bergen continued, “Oh, yeah, I made those guys do really weird stuff,” to which Gould responded, “I was fine with it.” The group went on to say that the Five-Timers Club just isn’t special anymore.

“Did somebody say ‘not special?’” O’Brien said in his surprise appearance, joking he was only there to sign up for Peacock and saying when he was a writer on SNL, he was a part of the first Five-Times Club special.

“John and I were never supposed to be on TV, we’re hideous. Right? Say it, John,” O’Brien told Mulaney, who said, “I guess.”