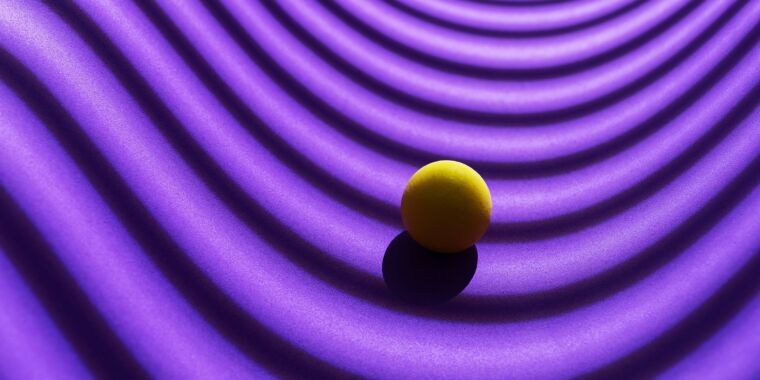 Have you ever had an otherwise perfect photo ruined by someone who moved too quickly and caused a blur? Scientists have the same issue while recording images of proteins that change their structure in response to light. This process is common in nature, so for years researchers have tried to capture its details. But they have long been thwarted by how incredibly fast it happens.

Now a team of researchers from the University of Wisconsin Milwaukee and the Center for Free-Electron Laser Science at the Deutsches Elektronen-Synchrotron in Germany have combined machine learning and quantum mechanical calculations to get the most precise record yet of structural changes in a photoactive yellow protein (PYP) that has been excited by light. Their study, published in November in Nature, showed that they were able to make movies of processes that occur in quadrillionths of a second.

When PYP absorbs light, it absorbs its energy, then rearranges itself. Because the protein’s function inside the cell is determined by its structure, whenever PYP folds or bends after being illuminated, this triggers huge changes. One important example of proteins interacting with light is in plants during photosynthesis, says Abbas Ourmazd, a physicist at UWM and coauthor on the study. More specifically, PYP is similar to proteins in our eyes that help us see at night, when a protein called retinal changes shape, activating some of our photoreceptor cells, explains Petra Fromme, director of the Biodesign Center for Applied Structural Discovery at Arizona State University, who was not involved with the study. PYP’s shape change also helps some bacteria detect blue light that may be damaging to their DNA so they can move away from it, Fromme notes.

Details of this important light-induced molecular shape-shifting, called isomerization, have eluded scientists for years. “When you look at any textbook, it always says that this isomerization is instant upon light excitation,” says Fromme. But, for scientists, “an instant” is not unquantifiable—the changes in the protein’s structure happen in the remarkably short amount of time known as a femtosecond, or a quadrillionth of a second. A second is to a femtosecond what 32 million years is to a second, Fromme says.

Scientists experimentally probe these incredibly short timescales with similarly short flashes of X-rays. The new study used data obtained in this way by a team led by UWM physicist Marius Schmidt at a special facility at the SLAC National Accelerator Laboratory in California. Here, the researchers first illuminated PYP with light. Then they hit it with an ultrashort X-ray burst. The X-rays that bounced off of the protein—called diffracted X-rays—reflected its most recent structure in the same way that light reflected from objects helps make conventional photographs. The briefness of the pulses allowed scientists to get something like a snapshot of the positions of all of the protein’s atoms as they moved, similar to the way a camera with a very fast shutter can capture the different positions of a cheetah’s legs as it runs.

But even the shortest X-ray flashes have typically not made for a fast enough “shutter” to get a femtosecond-by-femtosecond record of a protein’s shape change. “A major problem in analyzing diffraction signals is that the X-ray source is noisy,” says Shaul Mukamel, a chemist at the University of California, Irvine who was not part of the study. In other words, the X-ray flash always leads to at least some blurriness. Imagine the protein as a contortionist folding itself into a pretzel. Using X-rays, scientists can get a clear image of its relaxed pose immediately after it absorbs the light energy that spurs the contortion, and of its intertwined limbs at the end. But any images of its in-between motions would be fuzzy.