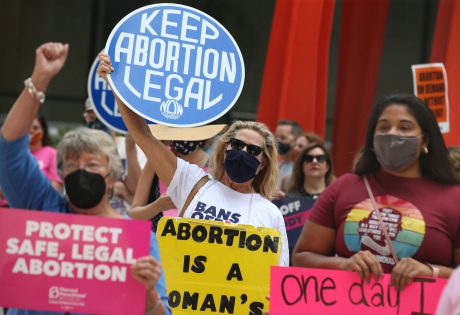 Access to abortion in the United States is deteriorating as right wing forces opposed to the equality of women win legislative victories in a number of states. They have a long term goal of banning all abortions, and have been working for years to overturn the 1973 landmark Roe versus Wade Supreme Court decision which gave constitutional protection to those seeking an abortion.

The growing strength of the far right in the US has given confidence to those who oppose abortion rights, and ex president Trump appointed Supreme Court justices Kavanaugh and Barrett both strongly opposed to abortion rights. This was viewed as a huge step forward by anti-choice organizations which redoubled their efforts to deny the American people their basic right to a critical medical procedure.

This has provoked outrage both within the United Sates and beyond. Organizing in states such as Texas was immediate where the state legislature passed very restrictive legislation. Advocacy groups have been working to arrange for abortions in other states, providing resources, support, and transportation. This is an important interim measure but cannot be a long term solution. The director of the one abortion clinic in Mississippi, which is also facing a court battle at the Supreme Court restricting term limits to fifteen weeks, spoke about the number of Texans coming to that clinic since the restrictions were passed in their home state. She stated how unsustainable this is.

In Mexico women’s organizations have spoken out and have committed to helping those seeking abortions in Texas. They are willing to provide mifegymiso, which is medication that can induce an abortion, by mail to anyone who requests it. They have been providing this, along with support through the process, in Mexico and are willing to take the legal risk of doing the same in the United States.

We know that to have real choices in our lives we must also have accessible childcare, easily available birth control, decent jobs, an end to coerced sterilization, freedom to express our sexuality as we choose, and so much more to live our lives with the dignity and respect we deserve. These must all be part of the campaign for full access to free abortion.

The trade union movement historically has played an important role in winning abortion rights and other needed reforms. In the US there has been an upsurge of support for unions in recent years. Rates of unionization are up with victories in unorganized workplaces such as Starbucks. Strikes have been taking place across the country, John Deere, Kelloggs, nurses unions and others. Workers are standing up for their rights moving ahead of their leadership in fighting the boss.

The labour movement in the United States must take a strong stand in support of reproductive justice and abortion rights. This is a massive and well financed attack on fundamental democratic rights. It will significantly impact the most marginalized, Black, Brown, Indigenous communities and the poor, who do not have the ability to cross state lines for an abortion.

What is happening in the US right now is outrageous, and unions must show concretely that they are on the side of those who are under attack. They have the collective power to take workplace actions to support the growing movement of resistance.

There is anger at the base of society which is being shown by the labour battles that have been taking place, Black Lives Matter, climate justice mobilizations and other movements for change over the past years. People are willing to struggle.

The fight for abortion access is a life and death matter as we have seen when abortion is restricted.  Dying from back street abortions is a reality for those who are denied. Organized labour must be in the front lines defending reproductive justice for all!