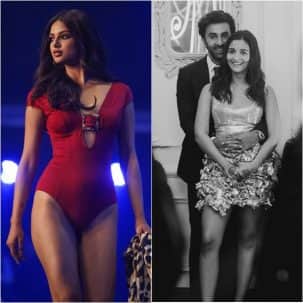 It’s a wrap for the day and the entertainment world had some very interesting things to offer. From Miss Universe 2021 Harnaaz Sandhu getting fat-shamed over her cooking video to Ranbir Kapoor revealing his plans of raising his daughter Raha with working wife Alia Bhatt, here are the top trending entertainment news today.

During a promotional event of Salaam Venky, Kajol was asked about the reasons why Bollywood heroes such as Shah Rukh Khan are still romancing younger actresses while she plays a mother to a 24-year-old in her film. Check out full story here.

Shah Rukh Khan was all praise for his Pathaan costar Deepika Padukone’s chic swimwear avatar in the still of Besharam Rang. He called her the most glamorous Bollywood beauty. Deepika was seen posing in a skimpy two-piece bikini in the picture. Check out full story here.

Vicky Kaushal got extremely bored on his vacation with Katrina Kaif as they celebrated their first wedding anniversary. The actor was seen playing langadi on the chess board and the fans can’t get over it. Check out full story here.

Miss Universe 2021 Harnaaz Sandhu again got fat-shamed over her latest appearance in her recently uploaded video where she was seen showcasing her cooking skills. Many people questioned, “From where does she looks like Miss Universe?” Check out full story here.

Veteran TV actress Veena Kapoor was murdered by her son over property dispute, according to reports. The actress was beaten up by her son with a baseball bat. After committing the crime, Veena’s son dumped her body into a river near Matheran in Raigad district.