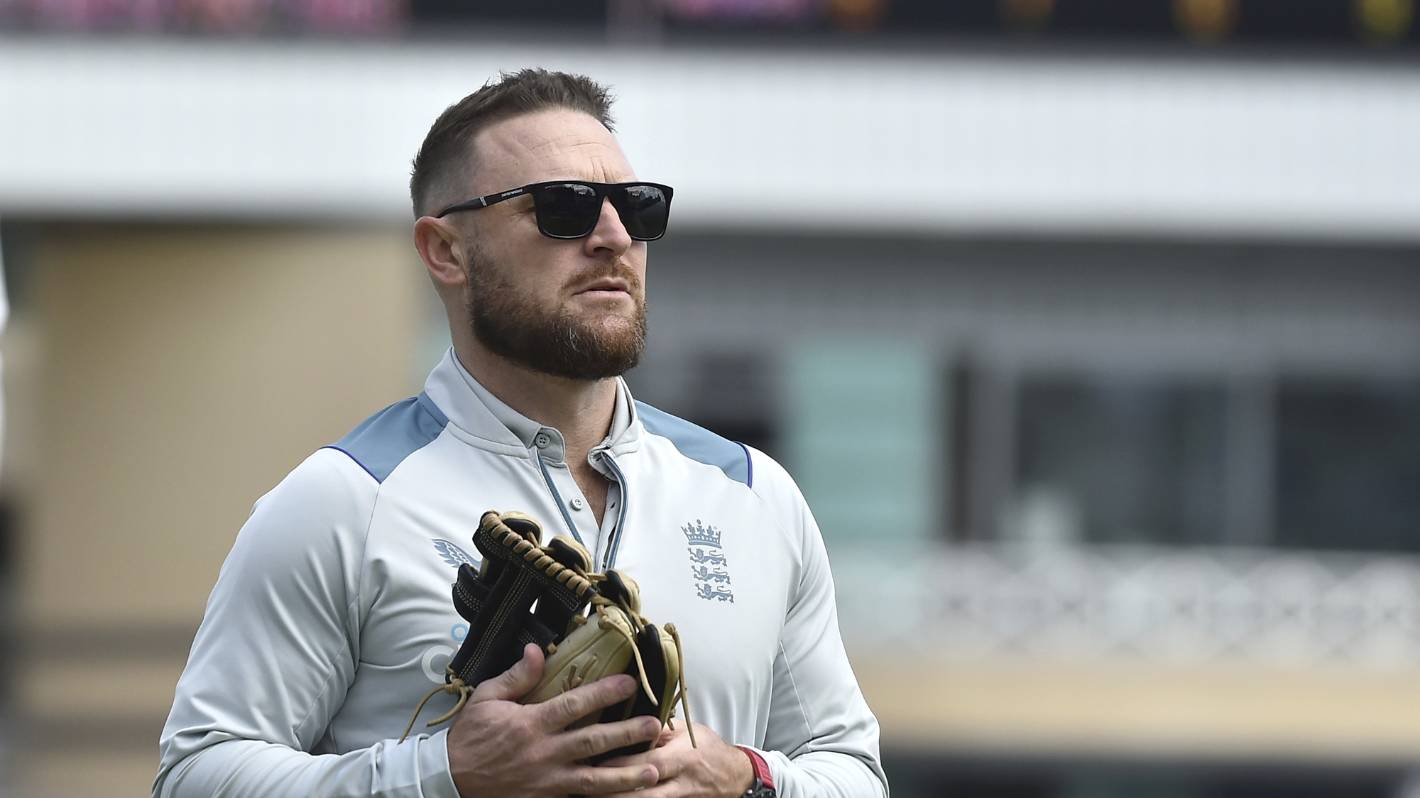 The New Zealand team know Brendon McCullum won’t back down from a challenge on the final day of the Trent Bridge test.

Trent Boult is confident England coach Brendon McCullum will instruct his batters to go for it on the final day of the Trent Bridge test, regardless of how many more runs the Black Caps get.

New Zealand are 224-7 going into day five, holding a lead of 238 runs. Daryl Mitchell has 32 runs and Matt Henry eight.

They will look to continue scoring in the morning and even though Kyle Jamieson is unlikely to bowl again because of a lower back injury, he will bat.

Last year, England were criticised for showing no intent to chase down a target of 273 set by New Zealand against them at Lord’s and played out for a draw, but Boult knows that won’t be the case with McCullum.

“I know their coach relatively well and I don’t think he’ll be shutting up shop,” Boult said.

“It’s exciting to come here in the morning with all of those results on the table and the are boys very excited for it.”

It’s set up for a thrilling final day and officials at Nottinghamshire Cricket have said they’ll make it free entry for spectators, so the atmosphere will be electrifying.

While it won’t come down to a Super Over, like the 2019 World Cup final, it will be gripping stuff.

“There was some hard work done throughout the last couple of days and I think the game is quite nicely poised,” Boult said.

“We’re 230 odd ahead with a couple of power hitters left in the tank, so it should unfold to be an interesting last day of test cricket.

“It’s always exciting turning up to the last day realising that the result is still on the line,” he added.

“Reflecting on the wicket over the last couple of days, people saying it’s a flat, true wicket, but there is enough excitement there to keep everyone interested on day five.

“Any runs we get in the morning should make it very interesting.”

Boult was 5-105 in England’s innings, which was wrapped up towards the end of the first session on Monday.

It was the 10th time he had taken five wickets in a test innings and he’ll be pivotal for the Black Caps again when England bat.

Although it’s been a batter friendly wicket, he feels there will be something for him and the other New Zealand bowlers.

“Without stating the obvious, the new ball is crucial on the wicket,” he said.

“I thought the way they bowled to us just before lunch excited us enough that if we keep it simple enough and put enough pressure on any batsman it’s going to do the trick.

“So we’ll focus on extending the lead as much as we can and be excited to get the ball in our hands to hopefully bowl for a test win.”

But before Boult gets the ball in his hands again, the Black Caps will be going out to try to get that target over 300 runs.

“In terms of the plans for us, we’re trying to extend the lead as much as possible, to give us something to bowl at,” Boult said.

“I thought there were a couple of crucial cameos to add to that total and hopefully there’s more to come tomorrow.”

One spanner in the works for the Black Caps is that they’re a strike bowler down, because of Jamieson’s injury. He had an MRI scan on Monday and will get the results of it in the morning.

But even if Jamieson can’t bowl, Boult has been impressed with how Michael Bracewell has stepped up with his off-spin.

“It’s not ideal and I feel for Kyle with the workload he’s been through,” Boult said.

“But we definitely have the skills in the tank with the fast bowlers we have at the moment and our new found spinner in Michael Bracewell, who gives the ball a tremendous rip and looks to offer a bit of bounce as well, so it’s going to be an exciting day.”