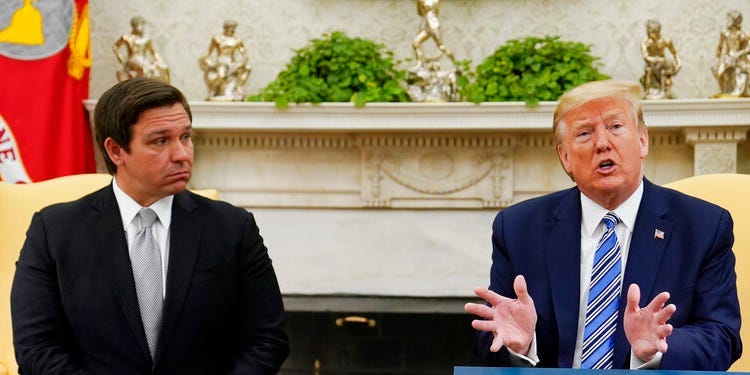 DeSantis recorded a robocall advertisement for O’Dea, touting the candidate as the right choice for Senate in Colorado.

O’Dea, a center-right candidate, has voiced his disapproval of Trump and previously said he would not like to see Trump as president again.

“I think that seeing a Biden-Trump rematch again in 2024 would rip the country apart,” O’Dea said on “The Ross Kaminsky Show” in August. “I think a lot of people are ready to move our country forward. So, I wouldn’t support him running again.”

On Monday Trump called O’Dea a “RINO,” or a Republican in Name Only, and discouraged his supporters from voting for him in the general election.

O’Dea is currently competing to represent Colorado in Congress against incumbent Democratic Sen. Michael Bennet. Bennet is currently leading by 7 percentage points, according to a Marist College poll from Oct. 11.

FiveThirtyEight predicts Bennett will win the Senate race in November.

O’Dea beat his primary opponent Ron Hanks, a pro-Trump candidate who was not endorsed by Trump, in June, and has received support from prominent Republican George W. Bush, who previously denounced the Jan. 6 riots.

A silent war has been brewing between DeSantis and Trump as speculation grows that both Republicans could run for president in 2024. DeSantis has become an increasingly popular option among Republicans, while Trump seems to be going after the Florida governor by insulting him behind closed doors.

Representatives for DeSantis, Trump, and O’Dea did not immediately respond to Insider’s requests for comment.