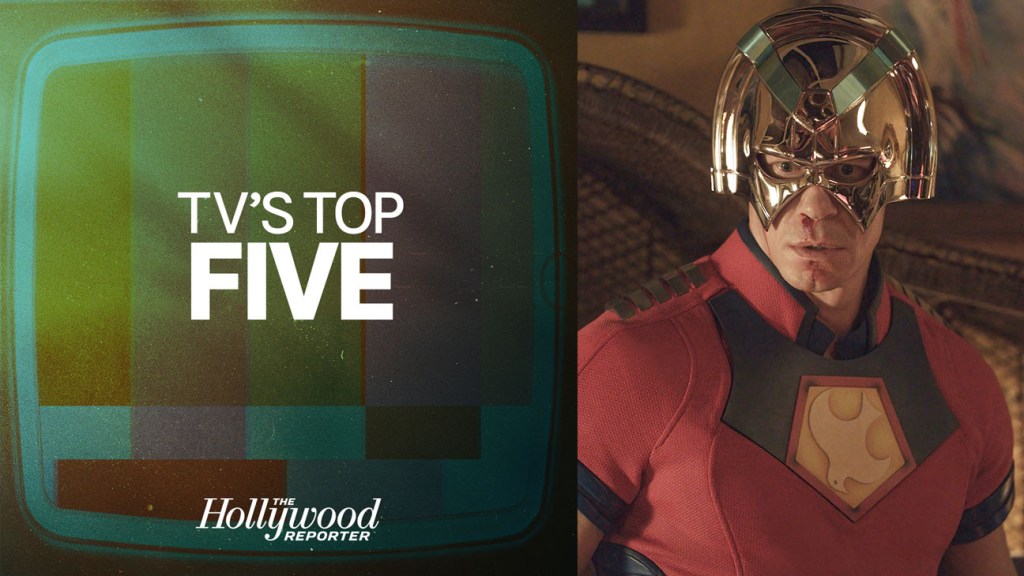 Welcome to the 150th episode of TV’s Top 5, The Hollywood Reporter’s TV podcast.

Every week, hosts Lesley Goldberg (West Coast TV editor) and Daniel Fienberg (chief TV critic) break down the latest TV news with context from the business and critical sides, welcome showrunners, executives and other guests, and provide a critical guide of what to watch (or skip, as the case may be).

To celebrate our milestone episode, Dan and I are doubling down on showrunner interviews. This week’s episode features a fun and insightful conversation with James Gunn about his HBO Max series, Peacemaker, and the differences in working for Marvel and DC. Then on Sunday, we’re doing our very first standalone Showrunner Spotlight special episode with an hourlong postmortem interview with Yellowjackets creators Ashley Lyle and Bart Nickerson about their breakout Showtime series and the season one finale. Warning: There will be spoilers and theories galore when that posts Sunday at 8 p.m. PT. (Another reason to subscribe, we’re available on various podcast platforms.)

But before we get to that, here’s what’s on tap for Episode 150:

1. Headlines!
The holiday lull is over and networks and streamers are back to the frenzy of breaking news, with a bunch of new series orders, renewals and castings, plus more on how the pandemic is impacting TV.

2. Disney at TCA
The semi-annual Television Critics Association’s winter press tour kicked off this week and Hulu and ABC came to play with a handful of big announcements, including more on the future of Grey’s Anatomy, the next show to come from Modern Family co-creator Steve Levitan and more.

3. Farewell again, Dexter
Showtime wrapped up its serial killer drama for a second and more definitive time this week. Does the Dexter: New Blood finale provide redemption for that terrible lumberjack “first finale”? Dan and I debate the merits of New Blood. Spoiler alert!

4. Showrunner Spotlight
James Gunn joins the show this week for a wide-ranging interview about HBO Max’s Suicide Squad TV spinoff, Peacemaker. Gunn opens up about working again with John Cena and showing the actor’s sensitive side. Gunn also discusses the process that led to Peacemaker and which came first: DC’s desire to emulate Marvel’s Disney+ originals or the idea to further explore Cena’s Suicide Squad character. Gunn also reveals the concerns that HBO Max executives had when it came to exploring a racist character in the show and how he handled them. The Guardians of the Galaxy captain also weighs in on the differences between working for DC and Marvel and why he would basically run the other way if either wanted him to prioritize a larger connected universe over his own script. “In two Guardians movies I was never asked to connect to a bigger picture,” he says. “The same with DC movies. I don’t have a big interest in doing that. I don’t ever want my story to suffer for the sake of a larger story. I want my story to be the prime thing. Any way a larger story helps enhance my story, great. But if that note came, I’d ignore it.”

5. Critic’s Corner
As usual, every episode ends with Dan offering his reviews of what to watch in the week ahead. In this episode, he reviews Peacock’s Wolf Like Me, Netflix’s Archive 81, HBO’s Somebody Somewhere and Hulu’s How I Met Your Father.

Hear it all now on TV’s Top 5. Be sure to subscribe to the podcast to never miss an episode. (Reviews welcome!) You can also email us with any topics or Mailbag questions you’d like addressed in future episodes at [email protected].

And don’t forget to tune in Sunday at 8 p.m. PT for our Yellowjackets Showrunner Spotlight interview.