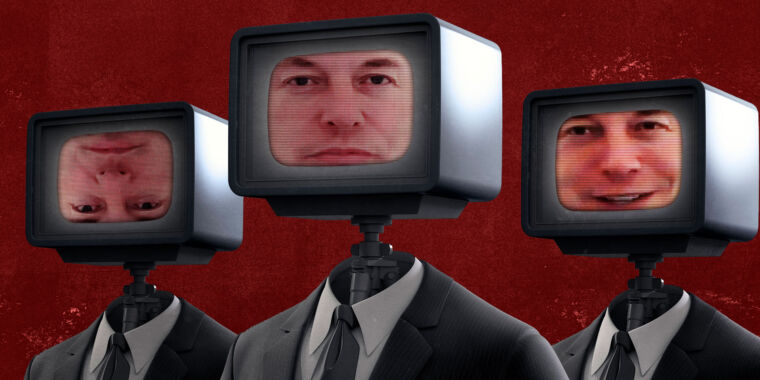 Twitter yesterday slammed Elon Musk’s response to the company’s lawsuit in a 127-page filing in the Delaware Court of Chancery that says Musk’s claims are “contradicted by the evidence and common sense.” Twitter’s court filing also said Musk’s spam analysis relied on a tool that once called his own Twitter account a likely bot.

“According to Musk, he—the billionaire founder of multiple companies, advised by Wall Street bankers and lawyers—was hoodwinked by Twitter into signing a $44 billion merger agreement,” Twitter wrote. “This story is as implausible and contrary to fact as it sounds. And it is just that—a story, imagined in an effort to escape a merger agreement that Musk no longer found attractive once the stock market—and along with it, his massive personal wealth—declined in value.”

Twitter’s filing was in response to Musk’s defense and counterclaims, which were submitted last week but not made public immediately because Twitter was given time to request redactions. Twitter apparently chose not to make any redactions.

“Musk’s Counterclaims, based as they are on distortion, misrepresentation, and outright deception, change nothing. Musk signed and is obligated to consummate the merger agreement,” Twitter wrote.

Musk has defended his attempt to break the merger agreement by questioning Twitter’s public disclosure that less than 5 percent of its monetizable daily active users (mDAU) are spam or fake. Twitter’s court filing said Musk’s own analysis used a publicly available website to find “that false or spam accounts constitute at least 10 percent of Twitter’s monetizable daily active users,” but “Musk is not measuring the same thing as Twitter or even using the same data as Twitter.”

“Musk can produce a higher estimate only by running a data set neither limited to nor inclusive of mDAU through a generic web tool that designated his own Twitter account a likely ‘bot.’ The result is a distortion that Musk is hoping will nonetheless make waves,” Twitter said.

Specifically, Musk used “an Internet application called the ‘Botometer’—which applies different standards than Twitter does and which earlier this year designated Musk himself as highly likely to be a bot,” Twitter said.

The Botometer website is a project of the Observatory on Social Media and the Network Science Institute at Indiana University. Citing a May 2022 Protocol article, Twitter’s court filing said that “the Botometer indicated that Elon Musk’s own Twitter account was likely a bot, scoring it 4/5.”

This morning, Botometer gave Musk’s account a rating of 1.2 out of 5, indicating that Musk is more “human-like” than bot-like as of today. Protocol’s article in May noted that Musk’s account was getting wildly different Botometer scores from one day to the next, saying the tool “highlights just how hard it is to identify bots, especially using only public data.”

As Twitter’s court filing noted, “the Botometer’s own FAQ website cautions that ‘Bot detection is a hard task’ and that if it ‘were easy to do with software, there wouldn’t be any bots—Twitter would have already caught and banned them!'”

Twitter’s filing described other problems with Musk’s reliance on the Botometer as follows:

The Botometer thus does not even purport to apply Twitter’s definition of a false or spam account. In fact, some bots (like those that report earthquakes as they happen or updates on the weather) are often helpful and permissible under Twitter’s platform manipulation and spam policy, to which Twitter respectfully refers the Court. Moreover, Defendants have not indicated what score they are applying to conclude an account constitutes spam; thus, their allegation is unverifiable.

Musk already lost one important ruling when Court of Chancery Judge Kathaleen McCormick expedited the trial, rejecting Musk’s request to delay it until February 2023. The five-day trial is now scheduled to begin on October 17.