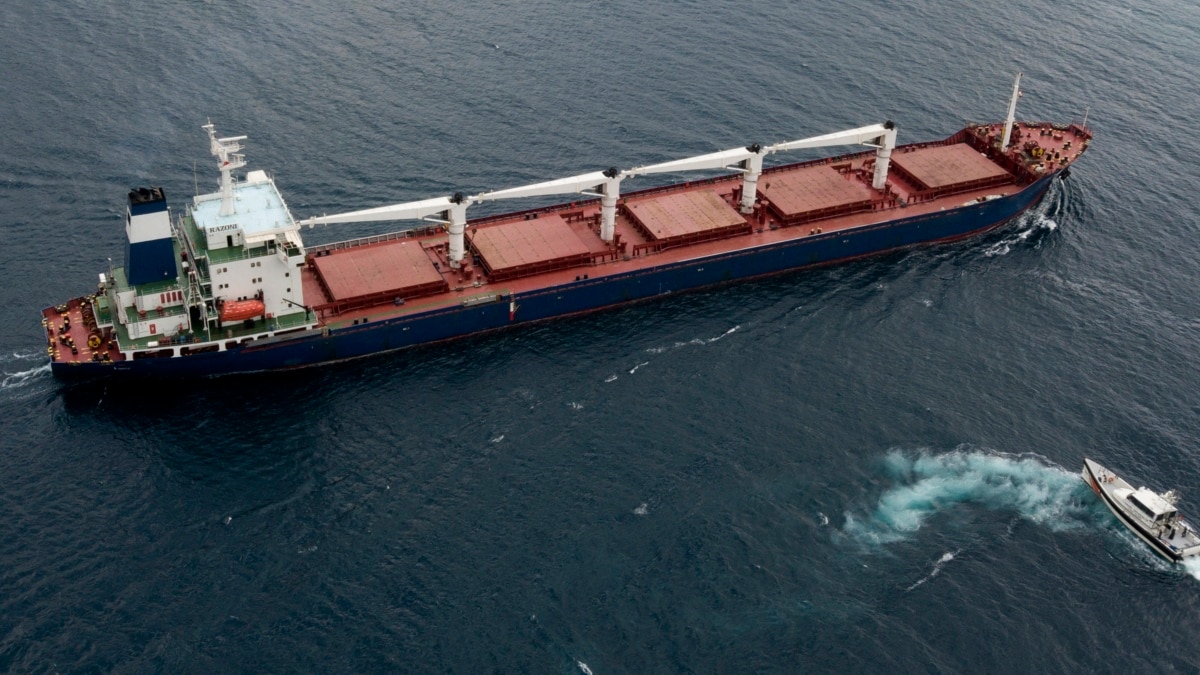 The first cargo ship carrying grain exports from Ukraine since Russia launched its invasion in late February cleared inspection Wednesday in Istanbul and will continue to its destination of Lebanon.

A joint civilian inspection team of officials from Russia, Ukraine, Turkey and the United Nations spent about three hours aboard the commercial vessel Razoni.

The team is part of the Joint Coordination Center (JCC), set up in Istanbul under the Black Sea Grain Initiative signed on July 22. It will oversee implementation of the deal.

Joint Coordination Center officials are seen aboard the Sierra Leone-flagged cargo ship Razoni, carrying Ukrainian grain, during an inspection in the Black Sea off Kilyos, near Istanbul, Aug. 3, 2022.

The JCC said the team confirmed that all was in order with the crew and cargo. This marked the end of an initial “proof of concept” operation for executing the agreement, the center said.

Kyiv’s Ministry of Infrastructure said there were 17 more vessels loaded and awaiting permission to depart from the southern ports of Odesa, Chornomorsk and Yuzhny.

The Razoni is carrying more than 26,000 tons of corn bound for Tripoli. With an estimated 20 million tons of grain stuck in Ukraine because of the war, President Volodymyr Zelenskyy told Australian students in a video meeting Wednesday that the first shipment was “still nothing,” but that he hoped they would continue.

U.S. Secretary of State Antony Blinken welcomed the development but cautioned that it was only a first step and urged Russia to abide by the agreement.

“Russia must meet its commitments, including by facilitating unimpeded exports of agricultural products from Black Sea ports,” Blinken said in a statement. “Russia must also end its attacks that are rendering farmland in Ukraine unusable and destroying agricultural infrastructure. As long as Russia continues its aggression, the Ukrainian people and the world’s most vulnerable will continue to suffer its effects.”

In New York, U.N. Secretary-General Antonio Guterres told reporters the organization was looking at ways to ease the global energy crisis caused by the war — in essence, seeking the energy equivalent of the Black Sea Grain Initiative.

Guterres said that when those negotiations started to gain traction, prices of wheat and fertilizer began to drop. They are now at roughly pre-invasion levels, he said.

“But that doesn’t mean that bread in the bakery is at the same price as before the war,” he cautioned, noting global inflation rates.

Guterres said he hoped to get energy markets to relax in anticipation that an understanding can be reached in which supply will exceed demand.

“For that, there are two things that are essential,” he said. “One is, reduce consumption as much as possible. And second is, bet on a strong investment in renewable energy.”

The U.N, chief criticized what he said was the “grotesque greed” of oil and gas companies whose profits have been exploding with the energy crisis.

“It is immoral for oil and gas companies to be making record profits from this energy crisis on the back of the poorest people and communities, and at a massive cost to the climate,” he said, urging governments to tax these profits and use the revenue for social safety nets.​

Britain’s Defense Ministry said Wednesday that it was “likely we will see an increase in civilians attempting to flee Kherson [region] and the surrounding area as hostilities continue and food shortages worsen. This will create pressure on transport nodes and routes, likely resulting in measures to control movement being implemented.”

Ukraine’s General Staff reported heavy Russian shelling in the area around Kharkiv, Ukraine’s second-largest city, while Russia said it carried out missile strikes in Lviv in the western part of the country against a depot of weapons provided by Poland.

Some information for this report came from The Associated Press, Agence France-Presse and Reuters.