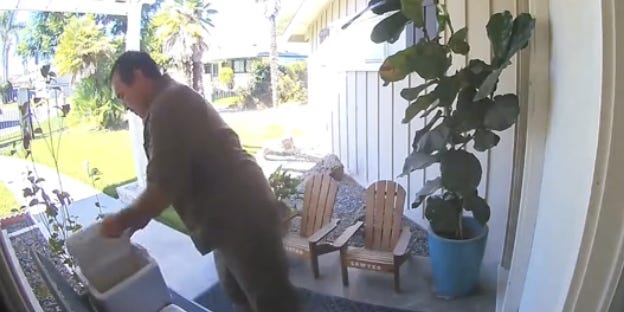 A Texas man took to Twitter to praise a “wonderful” UPS driver who delivered temperature-sensitive medicine for his dog intact after two prior attempts in the hot truck left the life-saving medicine spoiled.

Jim Shields described the UPS driver beating the heat by carrying the medication package in her own cooler before dropping it off. His story was in response to a tweet on the UPS Teamsters account criticizing the company.

The Teamsters called out UPS for not having air-conditioning in its delivery trucks and garnered thousands of likes and comments Wednesday. The union’s tweet included photos of temperatures around 120 degrees taken onboard the trucks, and is part of an ongoing controversy this summer over lack of AC in UPS trucks and warehouses.

“I have been thinking about this a lot. UPS may not give a sh–t about employee safety but shouldn’t they respond to customer complaints about ruined packages,” one commenter asked. “I mean they don’t give a sh–t about much generally but is that a way to lodge a complaint as a customer that might help?”

A Tiktoker has been sharing videos with her 250,000 followers from her doorbell camera of various delivery drivers accepting beverages from a cooler at her door as they drop off packages.

Commenters joined her in praising UPS drivers and pledged to also leave cool drinks for their own delivery people.

“When I delivered packages with UPS, that meant so much as a worker that someone else cared enough to put out things for you,” one comment read.

In a July report from Insider’s Kate Duffy, an unidentified UPS worker reported being reprimanded for wasting company time after stopping for less than a minute to take a sip of water.

UPS employees shared their concerns in July with NBC News as more workers reportedly are suffering on the job.

“Left and right people are falling out,” a 25-year UPS veteran said in the report. “Something is different this year. It’s a lot more people.”

UPS told Insider in a statement: “The health and safety of our employees is our highest priority. UPS drivers are trained to work outdoors and to manage the effects of hot weather. Our package delivery vehicles make frequent stops, which requires the engine to be turned off and the doors to be opened and closed, about 130 times a day on average.”