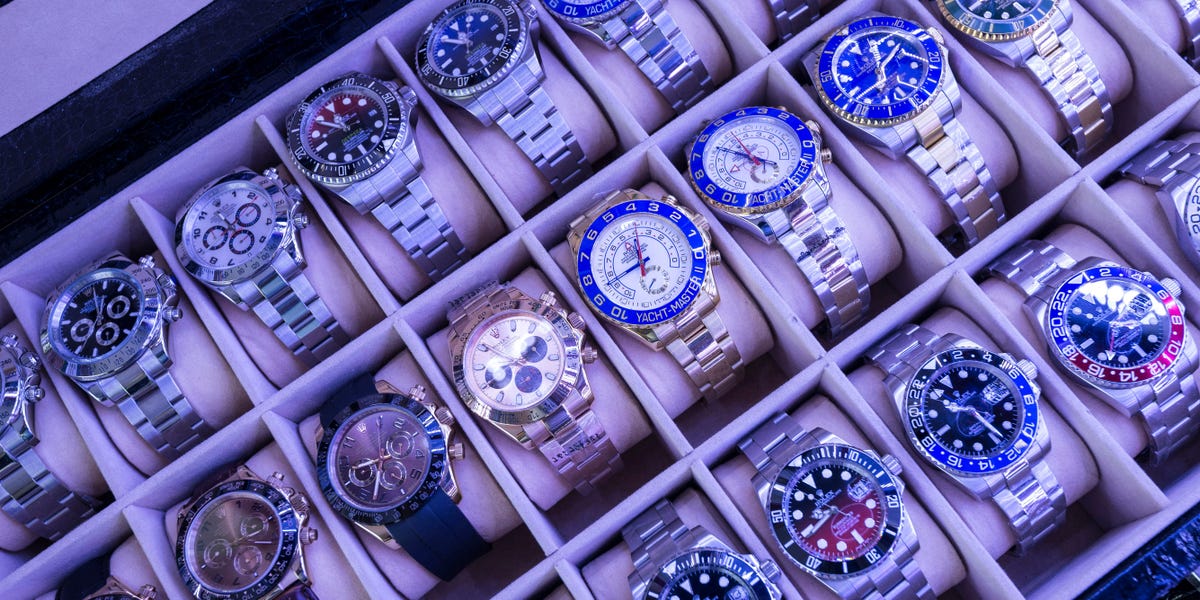 In April, US Customs and Border Protection (CBP) in Indianapolis seized 460 fake Rolex watches that had been imported from Hong Kong.

The shipment was addressed to a residence in Brooklyn, according to a statement released by CBP on May 2. The Rolex watches would have been worth $10.1 million had they been real. Officers picked out the shipment as they recognized the details of the sender, who has a history of fraudulent activity, CBP said.

CBP said it will hand over investigations to Homeland Security and inform authorities in the sender’s country of the seizure. Steven Bansbach, a spokesperson for US Customs and Border Protection Public Affairs, told Insider it’s difficult to track and prosecute counterfeiters even if they’ve been identified.

The CBP regularly seizes counterfeit luxury goods. In 2021, it confiscated 27,107 shipments of pirated goods that would have been worth more than $3.3 billion if the products were genuine, Bansbach said. The total amount of counterfeit goods seized annually rose by 152% in 2021.

Watches and jewelry were the top products seized based on the value in 2021, amounting to $1.18 billion, Bansbach said. Handbags and wallets came in second, with the estimated value of confiscated shipments exceeding $972 million. The majority of these shipments come from China, the world’s largest producer of fake goods.

The rise of ecommerce has made it increasingly difficult to clamp down on counterfeit trading, since merchants do not face a strict vetting process when setting up an online store.

To clean up its reputation as a producer of high-grade counterfeit products, China passed a law in 2019 that makes ecommerce operators liable if merchants sell copycat goods on their platforms, and face fines of up to 2 million yuan (US$290,000) if they do not remove disreputable merchants when notified by authorities.

However, the increased scrutiny on counterfeit production in China has not deterred copycat manufacturers.

“Sometimes better quality components are found in copies than in originals, when brands supply themselves in China,” Thierry Dubois, CEO of Selective Trademark Union, told Europa Star in January 2020. Selective Trademark Union is an organization that protects the interests of luxury brands and cooperates with local authorities in field investigations to flag counterfeit products.

As a result, younger generations in China buy the latest editions from stores to avoid accidentally purchasing fakes, Nicole Li, a China-based marketer for a luxury brand, told Insider. “We tend to follow specific brands too, and it’s easy for us to figure out if it’s a fake,” Li said.

China also offers masterclasses where students learn how to detect fake luxury products. In the case of Chanel, the lining of their black handbags must be pink, and two alphabets in the brand’s authenticity cards will light up under a special ultraviolet light. Certain letters in the Chanel logo also use a rectangle font instead of a square font, per the South China Morning Post.