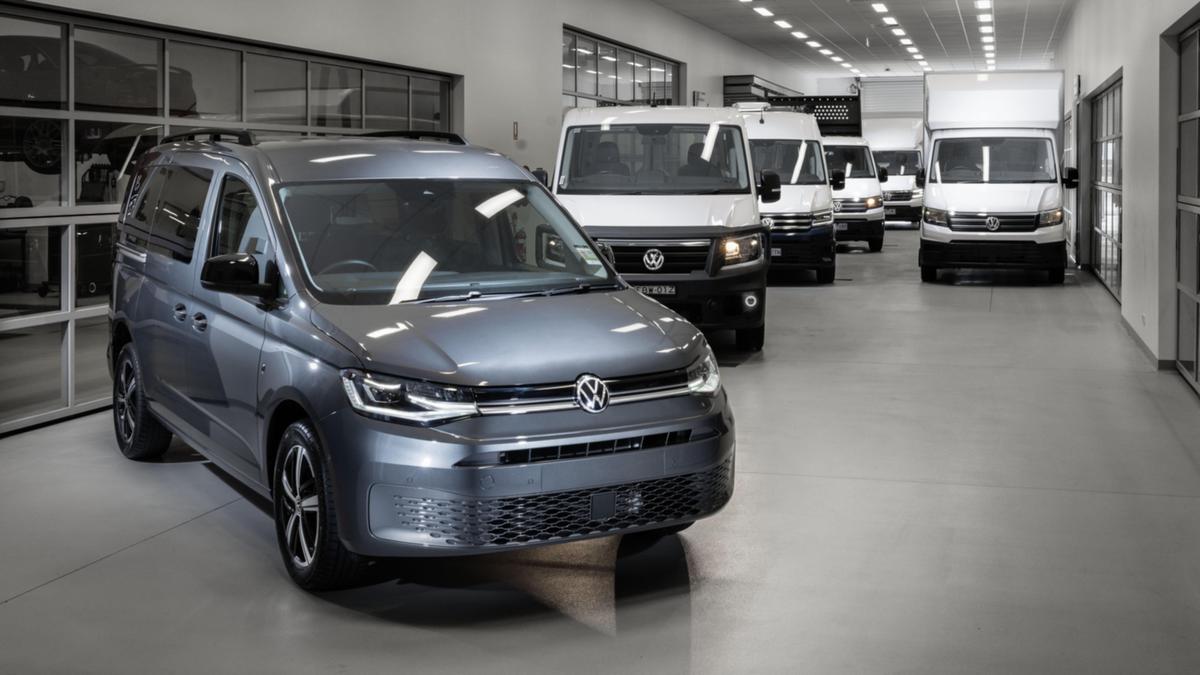 Volkswagen Commercial is rolling out a range of ‘turn-key’ specialist vehicles such as a wheelchair-ready Caddy, and Crafter-based tippers, cold storage trucks, and luxury motorhomes.

Rather than needing to buy base vehicles and take them to a specialist converter, these for-purpose commercials are (or will be) available ready-to-go from VW dealers – with warranties.

The conversion work is being done by Volkswagen-approved (OEM level) third-parties in Europe and the UK with longstanding VW dealings, or by partner organisations in Australia such as Jayco, Walkinshaw and ARB.

Seven ‘conversion’ variants – either confirmed for Australia or under evaluation and testing –were unveiled at the new Volkswagen Group Australia office and training centre at Essendon Fields last week, to promote the division and generate market interest.

Already a major focus for the company at home, Volkswagen’s Commercial Vehicles division says it sees this as a big part of its future in Australia, and a key differentiator.

“We know from the success of the Australian-engineered Walkinshaw Amarok and Crafter Kampervan that there are great opportunities for Volkswagen Commercial Vehicles to provide even more tailored solutions to a variety of recreational and specialist needs,” claims director Ryan Davies

“From ambulance fleets to wheelchair access vehicles, from refrigerated transport to tough tipper bodies, the Caddy and Crafter in particular provide the perfect basis to provide versatile and integrated solutions – factory backed with warranty, turn-key solutions that are ready to go.

“These seven vehicles show the clear intent of Volkswagen Commercial Vehicles to expand beyond the series production vehicles available in showrooms.”

This is the first appearance in Australia of a vehicle from the “soon-to-be available” Caddy Wheelchair Accessible Conversion, based on the Caddy Maxi.

The vehicle is converted by a 400-staff company called AMF-Bruns GmbH headquartered in Lower Saxony, billed as the European leader in making vehicles for people with reduced mobility.

The Caddy Wheelchair Accessible Conversion is now being homologated for the Australian market with a target release date of late 2023. It already has Full European Type-Approval, and more than 350 have been sold in new Zealand already.

VW claims that in displayed six-seat specification it will cost around $25,000 more than the Caddy Maxi on which it is based, suggesting a circa-$80,000 price tag. Five- and seven-seat layouts are available.

Features include an ‘Easyflex’ ramp with cut-out floor that tucks away below the vehicle, a folding head- and backrest for the wheelchair occupant with a restraint system crash-tested to 20g (forces), and extra-long wheelchair belts.

The vehicle can be serviced at any VW dealer and the conversion maintenance (eg. for the hydraulic lift) will be taught to dealers with support from AMF-Bruns.

While a major upside is the turn-key nature of this machine, VW says it will be able to invoice the vehicle and conversion separately – for organisations that require it such as the government’s NDIS.

This Crafter modification was developed from a direct request from Emergency Services to use on their ambulances, as Volkswagen tries to muscle in on turf traditionally held by the Mercedes-Benz Sprinter.

Smartbar is locally known for developing frontal protection systems for fleets, emergency services and mining, and this product was designed and made in Australia.

The hollow, polyethylene design provides frontal protection as well as the ability to flex and absorb on impact, then return to shape. It weighs 53kg.

This one is a toe in the water, with VW saying there’s “potential market demand”.

It’s created by a company called Ingimex, which bills itself as the UK’s largest manufacturer of light commercial vehicle bodies.

It can be driven on a car licence with a sub 4.5t GVM, and has a claimed class-best circa 1.75t payload.

Payload is maximised since the body itself is almost half-a-tonne lighter than any comparable body, according to VW, and comes all complete excluding the optional-extra tail lift.

The box body comes pre-prepared to mount column or cantilever lifts with its adapted rear cross-member and pre-installed second battery. The shutter system is integrated in the roof.

It has three seats including an ErgoComfort driver’s seat with massaging, an eight-speed automatic, rear-wheel drive with dual rear tyres, and a four-tier load restraint system.

A product of Carlsen Baltic UAB Lithuania, a market-leader for refrigerated truck conversions in Europe and recognised priority VW partner.

The body on display is being used to provide real-world testing data in Australia’s climate. It is being sent to a cold goods distributor, then further north to provide feedback via the GPS tracking system with temperature sensors.

It uses a eutectic cooling system that does not require engine power to keep the body cold during runs – just a three-phase plug at base and six hours “pull-down” time. So long as you don’t leave doors open too long, it’s designed to maintain a temperature for up to 13 hours.

Estimated pricing, “if the decision is made to move ahead with an Australian on-sale date”, would be circa-$130,000 plus on-road costs, says VW.

There are no tailpipe emissions from the eutectic refrigeration, no operational noise, and “continuous cooling” even when the vehicle engine is off. It has full European & Australian Type-Approval.

This luxury 6.8m-long motorhome made by Jayco in Dandenong, Melbourne, has three beds, dining and seating areas, an internal bathroom, kitchen with gas cooktop, sinks, a lithium house battery with solar, an external awning and more.

It has also standard 4Motion all-wheel drive, and costs $150,440 plus on-road costs with alloy wheels and two-tone paint. Rather than breaking it all down here, read our separate detail story here.