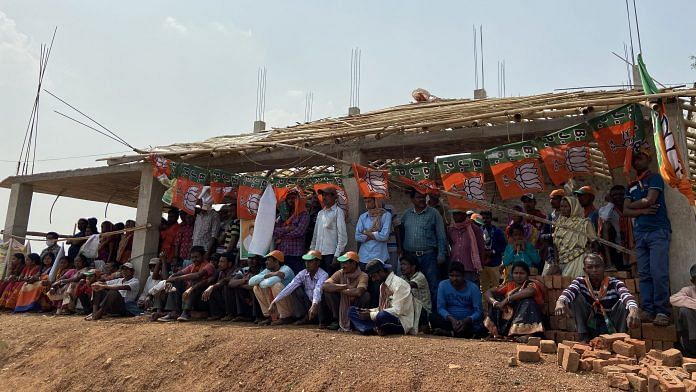 Jangalmahal: Chief Minister Mamata Banerjee has her work cut out in retaining the once red bastion of Jangalmahal, which goes to polls Saturday, thereby kicking off the eight-phase West Bengal elections.

The region had always sided with the Left parties until the 2014 Lok Sabha elections, when Mamata’s Trinamool Congress swept all five Parliamentary seats.

The TMC consolidated its position in the 2016 assembly polls, winning 31 of the 35 assembly segments but suffered a massive jolt in the 2019 Lok Sabha polls, when it lost all five seats to the BJP.

The chief minister and her TMC are now expecting electoral dividends from at least a dozen-odd government cash schemes for tribals that generate a minimum monthly dole of Rs 6,000 per family. The TMC manifesto has also promised a dole of Rs 12,000 a year for Scheduled Tribe and Scheduled Caste families.

To reclaim lost ground, Mamata has even inducted Chhatradhar Mahato, once the face of Maoist violence in the region, into her party. He had joined the party in July last year after spending 10 years in jail.

But the chief minister’s efforts have been hampered by local-level corruption, particularly over the cut money issue, a colloquial term to describe extortion by local panchayat and block panchayat members.

Beneficiaries of various schemes allege that of the Rs 6,000 they receive, they pay a third or Rs 2,000 as ‘cut money’ to Trinamool functionaries and party workers.

Then there are the other issues such as unaddressed water-woes and a demand by Kurmis, an OBC community, that they be included in the ST list.

With campaigning set to end, ThePrint travelled across constituencies in the region where unlike in the previous years, the area was bereft of enthusiastic poll activities such as street corner campaigns, posters, banners and village meetings.

Also read: Ex-CEA Ashok Lahiri is now BJP’s candidate in Balurghat after being dropped from Alipurduar

The region’s name is one that is a result of British legacy — “Jungle estates” or Jangalmahal was formed by British possessions and territories of independent rulers lying between Midnapore and Birbhum.

It became infamous as Maoists expanded their base from Chhattisgarh to West Bengal through Latehar and parts of Jharkhand and Odisha.

Taking advantage of the impoverished tribal populations, they penetrated villages in the region between 2004 and 2005.

The long-subdued movement turned violent at the fag end of the Left era after a mine blast in former chief minister Buddhadeb Bhattacharjee’s convoy in 2008-09. The blast led to alleged police excesses in villages of Jhargram and Lalgarh villages and Mamata Banerjee, then in opposition, came out in support of tribals.

Peace returned to the Maoist hotbed after years when Mamata Banerjee assumed office and Maoist militia chief Kishenji was killed during an encounter in 2011.

The narrative has, however, changed since 2019, when the BJP swept the area.

Local villagers start their conversation with “we love Didi” but soon the conversation veers into allegations of corruption against her party.

“Didi announces a lot but we do not get what she promises,” said Gautam Mahato, a beedi worker at Jamboni. “I have two senior citizens at home, and my wife is a folk artist. I am a beedi worker. According to government schemes, my five-member family should get Rs 6,000 but we get Rs 4,000 due to cut money.”

Sunil Nayak, a sharecropper at Belpahari echoed his views. “The CPI(M) left us to starve,” he said. “When Didi became chief minister, she promised development. We still suffer from an acute water crisis. The government schemes do not reach us.”

Poverty, lack of jobs and corruption

Poverty, a lack of job opportunities and corruption still continue to be major issues.

Nearly 50 per cent of Jangalmahal’s electorate is composed of tribal communities such as the Santhals, Oraon, Kheria, Lodha, Munda Mahali and Bhil.

The constituency also has a sizeable SC population. One of the dominant communities are the Kurmis who want to be added to the ST list.

“OBC is like a general caste. There is no reservation for us in government jobs and education. We want tribal status,” said Deepak Mahato, a primary school teacher at Binpur and a Kurmi activist.

Chhatradhar Mahato, the Maoist-turned-Trinamool Congress leader told ThePrint the power to reclassify a community does not lie with the state government.

“Kurmis form at least 37 per cent of the total population here and they are a deciding factor,” Mahato said. “The state government will do its part but the Centre has to give the community tribal status.

“In 2019, BJP made false promises on this, but failed to deliver. We have reached every village and explained to people what Didi has been doing for them,” added Mahato, who is a Kurmi himself.

He also rubbished the cut-money allegations, saying they were just stray cases.

But Mahato himself is a poll issue here, with the BJP raking up his Maoist antecedents.

Prime Minister Narendra Modi, while addressing a rally in Purulia, made a veiled reference to his inclusion into the TMC. “Mamata is providing underground support to Maoists for her political gains,” he said.

Sukhomoy Satpaty, the BJP candidate at Jhargram and the party’s district president, said, “The chief minister has exposed herself by joining hands with Chhatradhar Mahato. To win the region, she is again taking help of those who killed hundreds of people here.”

The ruling Trinamool Congress is banking on its doles and the development it claims that it has brought to the region.

He also listed the cash schemes that the government offers in the region. “These schemes include the Jai Johar for ST and Bandhu Prakalpa for SCs under which the beneficiaries get Rs 1,000 per month,” he said.

“Under the Shilpi Kumari scheme, the government gives Rs 1,000 per month to folk artists of the region. Beedi workers also get a monthly financial assistance of Rs 1,000 as the region has a thriving bidi making business.”

“In addition to the existing schemes, Didi has announced another minimum income scheme for SC-ST people, under which they will get Rs 1,000 per month,” he said. “If one takes into account all of this, a tribal or OBC family of five members can get at least Rs 6,000 to Rs 7,000 per month straight from the government.”

The Trinamool’s Jhargram candidate, Birbaha Hansda, a popular actor of Santhali film industry, lashed out at the BJP.

“The BJP claims that the tribal population is with them but Jharkhand taught them a lesson. We are Santhali and our religion is Sari,” she told ThePrint.

“We worship nature but they want to convert us to Hinduism. In 2019, they divided Santhalis and Kurmis by luring the latter to reservation.”