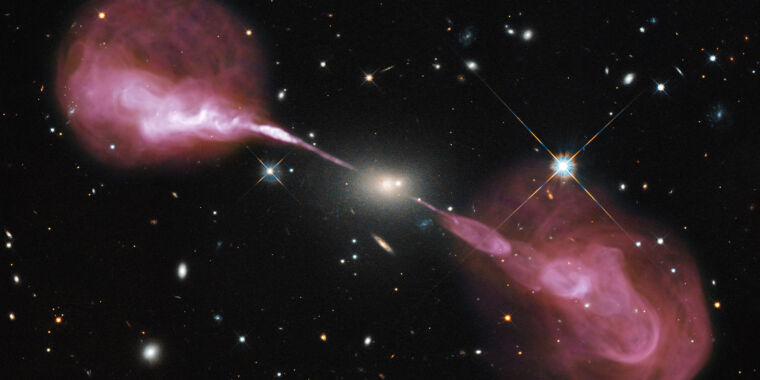 Active galactic nuclei, powered by the supermassive black holes they contain, are the brightest objects in the Universe. The light originates from jets of material hurled out at nearly the speed of light by the environment around the black hole. In most cases, these active galactic nuclei are called quasars. But, in rare instances where one of the jets is oriented directly toward Earth, they’re called a blazar and appear brighter.

While the general outline of how a blazar operates has been worked out, several details remain poorly understood, including how the fast-moving material generates so much light. Now, researchers have turned a new space-based observatory called the Imaging X-ray Polarimetry Explorer (IXPE) toward one of the brightest blazars in the sky. The data from it and other observations combined indicate that light is produced when the black hole jets slam into slower-moving materials.

The IXPE specializes in detecting the polarization of high-energy photons—the orientation of the wiggles in the light’s electric field. Polarization information can tell us something about the processes that created the photons. For example, photons that originate in a turbulent environment will have an essentially random polarization, while a more structured environment will tend to produce photons with a limited range of polarizations. Light that passes through material or magnetic fields can also have its polarization altered.

This turns out to be useful for studying blazars. The high-energy photons these objects emit are generated by charged particles in the jets. When these objects change course or decelerate, they have to give up energy in the form of photons. Since they’re moving at close to the speed of light, they have a lot of energy to give up, allowing blazars to emit across the entire spectrum from radio waves to gamma rays—some of the latter remaining at those energies despite billions of years of redshifting.

So, the question then becomes what causes these particles to decelerate. There are two leading ideas. One of those is that the environment in the jets is turbulent, with chaotic pile-ups of materials and magnetic fields. This decelerates the particles, and the messy environment would mean that the polarization becomes largely randomized.

The alternative idea involves a shockwave, where material from the jets slams into slower-moving material, and decelerates itself. This is a relatively orderly process, and it produces a polarization that’s relatively limited in range and gets more pronounced at higher energies.

The new set of observations is a coordinated campaign to record the blazar Markarian 501 using a variety of telescopes capturing polarization at longer wavelengths, with IXPE handling the highest energy photons. In addition, the researchers searched the archives of several observatories to obtain earlier observations of Markarian 501, allowing them to determine if the polarization is stable over time.

Overall, across the entire spectrum from radio waves to gamma rays, the measured polarizations were within a few degrees of each other. It was also stable over time, and its alignment increased at higher photon energies.

There’s still a bit of variation in the polarization, which suggests there’s some relatively minor disorder at the site of the collision, which isn’t really a surprise. But it’s far less disordered than you’d expect from a turbulent material with complicated magnetic fields.

While these results provide a better understanding of how black holes produce light, that process ultimately relies on the production of jets, which takes place much closer to the black hole. How these jets form is still not really understood, so people studying black hole astrophysics still have a reason to go back to work after the holiday weekend.