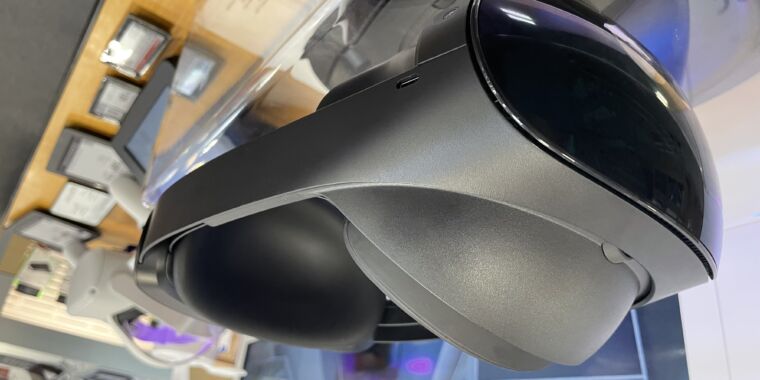 Even virtual reality’s biggest boosters may hesitate at the idea of spending nearly $1,500 for the Meta Quest Pro without trying it first. Fortunately, a retail partnership means that people can try the upcoming Quest Pro at select Best Buy locations during weekend demos.

After checking out one of those demos, though, we came away largely unimpressed with our first impressions. Even if the Quest Pro’s new features end up justifying its massive price (and more time with a retail unit later this week should help answer that question fully), our retail demo did not put Meta’s best foot forward.

Where do I go?

Upon entering Best Buy in Columbia, Maryland, on Sunday, I didn’t find any signage suggesting that there was any special VR demo going on inside the store. Instead, I had to search the aisles until I found a lonely Quest display in an unloved back corner of the store, complete with a Quest 2 and Quest Pro under glass. Nearby, a demo staffer leaned on a counter playing with his phone next to a demo unit in a charging stand. When I approached, he said I was the first person all weekend who had expressed any interest in a demo (though one more came to see what it was about while I was in the headset).

There was no special room or specific area set aside for the Quest demo at the store. Instead, the demo staffer awkwardly guided me to a small section of bare carpet where I stood unceremoniously between a tower of retail shelving and a pile of boxed 4K TVs. When shoppers and workers ended up crossing through that area during my setup, I got redirected to another section of carpet even further toward the corner of the store. There, I had to set up my own virtual “guardian” to mark the safe operating space and highlight walls and other obstructions for various “augmented reality” experiences.

To make matters worse, about 15 minutes into my demo, a peaceful meditation session in Tripp VR was interrupted by an abrupt “powering down” message when the headset ran out of charge. The demo staffer apologized, saying the unit “was at zero percent when I got it” and hadn’t been plugged in for very long before our demo. I took a quick shopping break and came back to a fully charged unit, but the Quest Pro still largely botched its one chance at a first impression.

A Quest for comfort

Demo-specific issues aside, putting on the Quest Pro is a noticeably more comfortable experience than previous Quest headsets. The flimsy straps on those earlier units have been replaced with a thick headband and large, semicircular cushions that rest on the forehead and the back of the skull. Once it’s wrapped around your eyes, an easy-to-turn knob in the rear gets a fit that feels secure without being too tight.

This new design means the “ski goggles” pressure that old Quest headsets exert on the area around your eyes is almost completely gone here. While the Quest Pro exerted a little bit of pressure on the bridge of my nose, it was no more distracting than wearing a pair of sunglasses. I could even reach up and scratch my nose without taking off the headset, thanks to a new open-bottomed design that allows much better airflow as well (the demo unit did have magnetic “blinders” pre-installed on the sides, though, to eliminate real-world distractions. I had to ask to have them popped off).

While I only spent about an hour total in the Quest Pro during my demo, I felt like I could have kept it on indefinitely without complaining.

The Quest Pro also has some nice quality-of-life improvements when it comes to getting the headset positioned for perfect visual focus. The headset’s inward-facing cameras automatically detected my interpupillary distance and told me to adjust the system’s lenses inward to match (which I did by simply reaching up through the bottom of the headset and sliding in a smooth but solid motion). The headset also told me that it was sitting too low in front of my eyes, and that I should tilt it upward and retighten for a better view.

With everything in focus, though, I have to say I was more than a little underwhelmed with the Quest Pro’s display. While the image was perhaps a little sharper than I was used to on previous Quest headsets, it was a far cry from the high-end clarity boost you’d expect from a high-end headset. The change was most apparent only in my peripheral vision, where images remained crisp and clear with no distortion even when casting sideward glances at the limits of the display.

My first experience with the full-color passthrough camera was not a good one, either—my view of the outside world jittered back and forth a few apparent inches as I tried to set up my playspace. While the issues corrected themselves relatively quickly, it was still a jarring start to the experience.