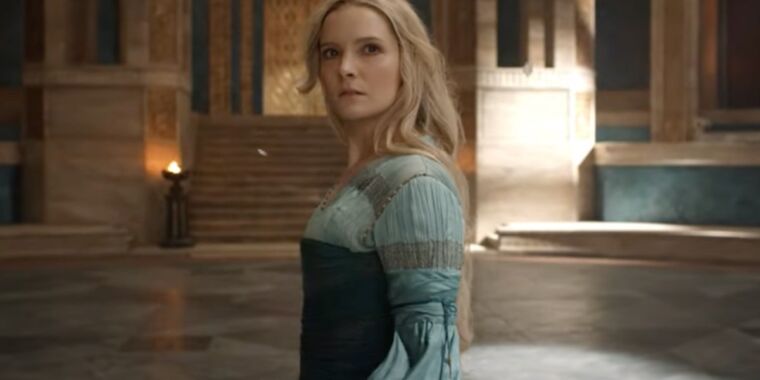 With HBO’s House of the Dragon debuting to a record nearly 10 million viewers, one might have forgotten that another new big-budget fantasy series is waiting in the wings. Prime Video reminded us of that by dropping a new trailer for The Lord of the Rings: The Rings of Power.

Based on notes and lore penned by J.R.R. Tolkien, the eight-episode series will revolve around the late author’s “Second Age” era. Per the official description:

This epic drama is set thousands of years before the events of J.R.R. Tolkien’s The Hobbit and The Lord of the Rings, and will take viewers back to an era in which great powers were forged, kingdoms rose to glory and fell to ruin, unlikely heroes were tested, hope hung by the finest of threads, and the greatest villain that ever flowed from Tolkien’s pen threatened to cover all the world in darkness. Beginning in a time of relative peace, the series follows an ensemble cast of characters, both familiar and new, as they confront the long-feared re-emergence of evil to Middle-earth. From the darkest depths of the Misty Mountains, to the majestic forests of the elf-capital of Lindon, to the breathtaking island kingdom of Númenor, to the furthest reaches of the map, these kingdoms and characters will carve out legacies that live on long after they are gone.

As we’ve reported previously, the large ensemble cast includes Morfydd Clark as a young Galadriel, “now a hardscrabble warrior leading the Northern Armies,” who is determined to hunt down her brother’s killer. She ends up adrift at sea with a new character named Halbrand (Charles Vickers). Charles Edwards plays Celebrimbor, whom hardcore LOTR fans will recognize as the elven smith who forged the legendary rings. Robert Aramayo plays a younger version of Elrond, and Maxim Baldry will play the infamous Isildur, ancestor of Aragorn, who eventually defeated Sauron but fell victim to the One Ring’s corrupting power. Peter Mullan plays the dwarf King Durin III.

There’s also a breed of hobbits known as the Harfoots, who mostly try to stay hidden and keep to themselves. But two curious young hobbits, Poppy Proudfellow and Nori Brandyfoot (played by Megan Richard and Markella Kavenagh, respectively), are more adventurous and somehow encounter The Stranger (Daniel Weyman), a mysterious man “who falls from the sky in a flaming meteor.”

The first teaser landed in February during the Super Bowl and gave us some eye-popping visuals, consistent with the rumored $500 million budget for the series. Prime Video released a nearly two-and-a-half-minute teaser trailer in July, two weeks before San Diego Comic-Con. This was followed by a full trailer during the convention. Attendees were treated to four exclusive clips from the series, each focusing on different protagonists. As Ars Tech Culture Editor Sam Machkovech reported:

The dwarvish Prince Durin IV participates in a rock-smashing contest; the series’ leading harfoot duo encounter and are nearly caught by a sleeping giant; Arondir manages to defeat a number of orc captors while restrained in chains; and the leading elf duo of Galadriel and Elrond share a solemn conversational moment that, at least in this event’s context, could be seen as flirty.

This latest trailer opens with a voiceover by Galadriel, telling us that her brother gave his life “hunting the enemy.” She takes up the cause in his stead. She asks for others to stand with her, as we see shots of several central characters who, one presumes, will become her comrades in arms. Or perhaps they will decline the offer. That seems to be the case with Halbrand, who insists, “I am not the hero you seek,” suggesting a dark secret in his past. “Whatever you did, be free of it,” Galadriel tells him.

Galadriel seems to be emerging as the most major protagonist, but we also get new footage of several other characters scattered throughout Middle-earth, including dwarves and hobbits. The latter, while humble, do have their strengths. “One thing we can so better than any creature in all Middle-earth—we stay true to each other, with our hearts even bigger than our feet,” Nori’s dad, Largo Brandyfoot (Dylan Smith), says. It looks like different kinds of struggles and battles will be waged on many different fronts, as befitting a sweeping epic series of this magnitude.

The Lord of the Rings: The Rings of Power premieres on Prime Video on September 2. Amazon is launching the series in “over 240 territories” simultaneously.

Ars Technica may earn compensation for sales from links on this post through affiliate programs.