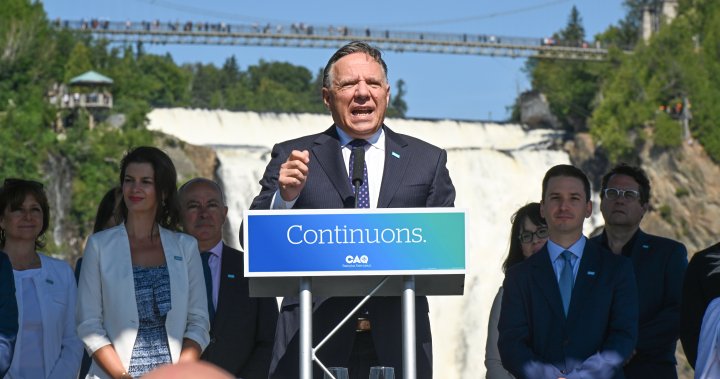 Quebec’s election campaign began on Sunday and Quebecers will go to the polls on Oct. 3; here’s a look at the five parties vying to form the province’s next government.

In 2018, the Coalition Avenir Québec  — also known as the CAQ — took power for the first time, becoming the first party other than the Parti Québécois and the Liberals to win a Quebec election in more than 50 years.

Founded in 2011 by François Legault, a former PQ cabinet minister and airline executive, and Charles Sirois, a businessman who had supported the Liberals, the centre-right party sought to move past the debate on independence by instead promoting Quebec nationalism rather than separation from Canada.

Legault’s government has strengthened the province’s French-language law and banned certain public servants, including teachers and police officers, from wearing religious symbols on the job. It also proactively invoked the notwithstanding clause to protect both of those controversial laws from Charter challenges.

His government has also pushed for more autonomy from Ottawa, including more power over immigration.

Legault, who remained popular during the COVID-19 pandemic, is running on his record and the province’s strong economy. Recent polls have suggested he will be re-elected with a bigger majority than the one he secured in 2018.

The Quebec Liberal Party has long positioned itself as the defender of federalism and champion of the economy, but since 2018, the CAQ has successfully sold itself as a safe option for federalist and economically minded voters.

Since the last election, the Liberals have struggled to connect with francophones and have alienated part of their anglophone base in Montreal.

Support for the party among Quebec’s francophone majority is at seven per cent, according to a recent Leger poll. And while the Liberals voted against Legault’s language law reform — seen by some anglophones as an attack on their community — the party’s initially ambiguous stance has created dissatisfaction among English-speakers. In reaction to the Liberals being seen as weak defenders of anglophone rights, at least two new parties have formed — Bloc Montreal and Canadian Party of Quebec — that claim to represent the interests of the province’s linguistic minorities.

Liberal Leader Dominique Anglade, who worked as a management consultant before entering politics, says her party is offering a unifying alternative to Legault’s “arrogant” and “divisive” government.

Anglade, a former president of the CAQ who left Legault’s party in 2015 over its stance on immigration and identity issues, is promising tax cuts for those making less than $92,500 and a $100-billion green hydrogen plan.

While Québec solidaire does not have a traditional leader — it instead names one female and one male as “co-spokespeople” — party co-spokesman Gabriel Nadeau-Dubois is the party’s candidate for premier. He became famous in the province as a leader of the 2012 student protests that led to months of demonstrations and garnered international headlines.

Nadeau-Dubois has said his party will campaign on addressing Quebec’s affordable housing shortage, helping people deal with the rising cost of living and fighting climate change.

If elected, Québec solidaire would change the province’s secularism law to allow public sector workers affected by the legislation to wear religious symbols at work — as long as their faces are uncovered.

And while the party expressed concern about the potential negative effect of the CAQ’s language-reform law on Indigenous communities, Québec solidaire supported the bill.

In 2018, Québec solidaire went from three seats in Quebec’s legislature to 10 as the left-wing party made gains outside of Montreal for the first time.

The 2018 election was only the second time since 1973 that the Parti Québécois was not elected Quebec’s government or official opposition. And while the party won 10 seats in that election, it had seven members at the start of the 2022 election campaign because over the past four years, two resigned and one was kicked out following a sexual assault allegation.

Recent polls have placed the PQ in fifth place with about nine per cent of the vote.

Leader Paul St-Pierre Plamondon, a lawyer who studied at McGill University and has an MBA from Oxford University, says he wants to focus his campaign on Quebec sovereignty. He says the fact that Legault must ask Ottawa for more power shows the need for independence.

The Conservative Party of Quebec

Quebec’s Conservative party received less than two per cent of the vote in the 2018 election, but since nominating former Quebec City radio host Eric Duhaime as leader in April 2021, the party has been regularly polling around 14 per cent.

Duhaime has collected support from disaffected former CAQ voters upset at the party for imposing some of the most stringent COVID-19 restrictions in the country, including a curfew that lasted five months. The party has also garnered support from people opposed to COVID-19 vaccine mandates.

The Quebec Conservatives, who are not affiliated with the Conservative Party of Canada, are campaigning for more privatization in the health-care system, lower taxes and smaller government. Duhaime has said he opposes Legault’s language law reform but supports the religious symbols ban.

Before the dissolution of the legislature, Legault’s party had 76 seats, while the Quebec Liberals had 27, Québec solidaire had 10 and the Parti Québécois had seven. The Conservative Party of Quebec held one seat and there were four Independents.